I first had the pleasure of meeting Anna Staiszewski (aka Anna Stan) online through her blog and I still remember the excitement I felt for her when she announced her first book deal, for the funny and magical middle grade MY VERY UNFAIRYTALE LIFE.


The book officially launches in November--but drop by your local bookstore and see if there are copies available, because a lot of them are showing up early! And Anna's here to tell us all about her charming book!


YOU
We can read all about your life from your bio in the jacket flap of your book. So, what's a completely random fact about you that most people don't know?

I once jumped out of a plane! In Australia! It was by far the craziest—and most amazing—thing I’ve ever done. I totally blame Keanu Reeves. Ever since I watched Point Break when I was in middle school, I knew I had to go skydiving one day.

As a kid, what was your favorite book? Have your tastes changed since growing up?
There were so many books that I read over and over when I was a kid: Anne of Green Gables, The Secret Garden, Mrs. Frisby and the Rats of NIMH. I was always drawn to stories that transported me to a different time and place, and that’s still very much true today.

YOUR BOOK
It's the inevitable question: what inspired MY VERY UNFAIRY TALE LIFE?

A few years ago, I was working on a very dark YA novel that was starting to suck the life out of me. I knew I needed something fun to work on to get me out of my funk. I sat down and started writing a scene about a girl who comes home from school one day to find a talking frog on her bed. What interested me about the scene was that the girl wasn’t surprised or excited to discover the frog in her room; instead, she was annoyed. It was such an unexpected reaction that I knew I had to find out more about this girl. 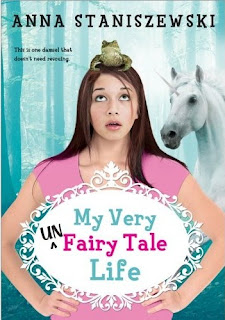 One of the great things about MY VERY UNFAIRY TALE LIFE is the way it turns ideas about fairy tale creatures on its head: the unicorns are bloodthirsty and the magical kingdom is falling apart. Can you tell us a little more about how you built the world of your novel?
I’ve always loved stories about young people who are swept off on magical adventures. But in this story, I wanted to play around with what happens after you’ve been an adventurer for years and you’re tired and fed up. Once I knew I wanted to do that, it was fun to take elements we expect in fairy tales (talking animals, mythical creatures, etc.) and make them into obstacles that get in Jenny’s way.


Can you tell us a little bit about the process--particularly the timeline--of writing MY VERY UNFAIRY TALE LIFE?
The process was pretty sporadic. This was the fun story I came back to when I was stuck on other projects, so I would write it in spurts. Once I signed with my agent (with a different project that never sold) she asked me if I had anything else in the works. I’d just finished a huge revision of the story—which was then titled JENNY THE ADVENTURER—so I sent it to her. She liked the concept but said the story needed more focus, so I worked with her on several major revisions before it was ready for submission. From the moment I first began writing the book to the day it actually sold, the span of time was about four years.


If your reader could only take away one emotion, theme, or idea from MY VERY UNFAIRY TALE LIFE, what would you want it to be?

Oh this is a hard one! The story is about adventure and magic, but most of all it’s about discovering—and accepting—your identity and your purpose in life.

YOUR WRITING
What's the most surprising thing you've learned since becoming a writer?
How loooong everything takes. Patience is not exactly one of my virtues, but I’ve been forced to become much more patient as I’ve trudged along through the writing and publishing process. I’m still tempted to have a little tantrum once in a while, but I’m getting much better about it.


Beyond the typical--never give up, believe in yourself--what would be the single best advice you'd like to give another writer?
Never stop writing. I had a few other projects that I thought would get me published: they didn’t. Luckily, I kept working on new things and one of those projects was finally The One.


What do you think are your strongest and weakest points in writing?
Because I have a theater background, dialogue is something that seems to come fairly naturally to me. In fact, my first drafts tend to be almost all dialogue. As for my weakest points? Where do I start! One major thing I have to work on as I go through my later drafts is putting a concrete sense of place into my stories. In early drafts, the characters are just floating around in space. I have to work at grounding them in a specific time and place so that readers can see what I’m imagining.

Thanks so much for having me, Beth!

Thanks for coming by, Anna!

Bio
Born in Poland and raised in the United States, Anna Staniszewski grew up loving stories in both Polish and English. She was named the 2006-2007 Writer-in-Residence at the Boston Public Library and a winner of the 2009 PEN New England Susan P. Bloom Discovery Award. Currently, Anna lives outside of Boston, Mass. with her husband and their adopted black Labrador, Emma. When she's not writing, Anna spends her time teaching, reading, and challenging unicorns to games of hopscotch. You can visit her at www.annastan.com.

Great interview Beth and Anna. That's so interesting that you wrote this book in spurts Anna. I struggle with setting too.

I loved the humor in this book. It was so original for a fantasy. Good luck with your debut Anna.

Great interview, Beth. Anna is awesome! I'll be attending one of her book signings in a couple of weeks. Ever since I read the ARC, I haven't been able to wait to pick up my signed copy of UNFAIRYTALE LIFE.

Love that Anna feels her theater background helps with dialogue. Power to the theater geeks! Can't wait to read this UnFairy Tale!

The premise for this story is so wonderful and fresh. Sounds like I have some book hunting to do :-)

This sounds like an amazing book! I will have to head over to Barnes and Noble and get it right away=)