Five Things I Love About Hamilton 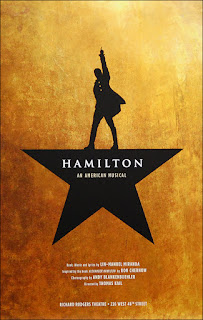 I resisted for as long as I could.

As a writer, most of my friends are in the arts. And most of them (as do I) like many different forms of arts--theater, visual arts, music. But when my artsy friends started telling me about Hamilton, I sort of scoffed. I had been burned--many times--by artsy friends recommending theater or musicals to me. I tend to like movies where things blow up, and while I have a deep love for certain plays (which also tend to be very popular ones: Wicked, Phantom, etc.), these are the same friends who recommended me to a few of the most excruciating hours I'd had in a theater seat.

I shouldn't have doubted.

Hamilton is everything I love about musicals, plus a bunch of other stuff I didn't even realize I wanted. It is, to put it simply, the best musical that I've ever had the pleasure to listen to and I haven't even had the chance to see it yet. The entire album is available at various plays online for free, including NPR, YouTube, Amazon Prime, and Spotify. 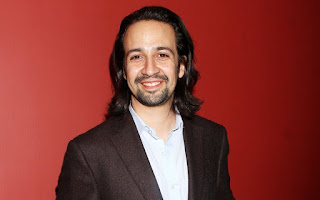 And that's the first thing I respect about this play--the writer (and star), Lin-Manuel Miranda, wanted to make it accessible. He made sure the music was available online for free, and he made sure the play was entirely sung--you can understand everything just by the audio, without having seen the play.

Lin-Manuel Miranda is, to put it simply, one of the greatest composers and musicians of our age. Hamilton is genius. And speaking of genius, I keep getting lost in the Rap Genius annotations of Hamilton--you guys know I love a good Easter egg or hidden detail in a work, and Hamilton is full of them! 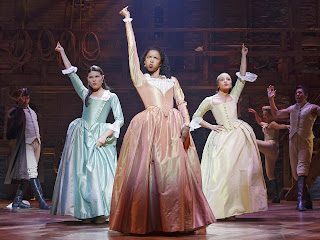 And that leads me to the second thing I love about Hamilton: All the new things I've learned.

Did you know that Aaron Burr was Vice President of America when he shot Hamilton? Or that Hamilton was killed (spoiler alert from like 200 years ago) in the same spot as his son had, when he was fighting a duel two years prior?

Did you know that Hamilton tried the first murder case in America after it became a country? Or that he was the subject of the first big sex scandal in the new America?

Did you know that as a child, Hamilton almost died--and watched his mother die--and became an orphan in the West Indies? That he wrote his way out--his poetry about a hurricane that devastated the island he was on caught the attention of learned men, who sponsored his trip to America and his education?

That's the third thing: the power of the word. A major theme running throughout the play is how powerful words are, something that I, as a writer, would obviously love. Words brought Hamilton out of poverty and out of the West Indies. Words gave him power as he rose the ranks during the American Revolution, they gave America power as he wrote in defense of the Constitution. Words gave Hamilton love as he wooed Eliza Schuyler, and they destroyed that love as he met Maria Reynolds.

And words killed him.

It was Hamilton's words--so influential--that cost Aaron Burr the presidency, that sent him on a mission of redeemed honor. 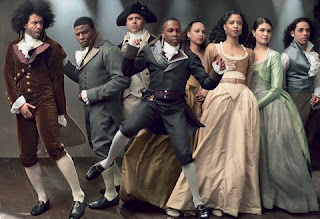 History comes alive in Hamilton--and it's about the people. That's such a cliche thing to say, but it's true. I can read the facts of history, I can know who's on the front of the ten dollar bill, but I don't understand. I don't know about motivations and desires and regrets and fears.

This is, ultimately, the power of all fiction. To make us not simply know facts, but to know truths that are indelible to all humanity. The American Revolution isn't a list of dates and battles--it's real blood, real loss, real triumph. Elections aren't the counting of ballots, it's understanding how one person can shape the history of a nation, of the world, it's faith that the majority can keep the path of government clear, it's raising your voice and hoping it joins a chorus.

But most of all, I love Hamilton for the music. It is--much like Hamilton himself--revolutionary. Musicals have a certain "style"...not Hamilton. Musicals have a common theme...not Hamilton. Hamilton stands on its own. It has a few songs with the typical "show tune" style, but mostly it's hip-hop and rap. It plays with words, it weaves them around and through, it creates sounds that have existed for decades but at the same time creates a totally new sound.

Check out this opening number, and wait for it, wait for the music to hit you:

I love what Hamilton says when he sings. The desperation to "write like you're running out of time" speaks to me, but I found myself most identifying with Aaron Burr's song, "Wait for It."

And there is a time when you wonder if the waiting is worth it. And you're working and striving and trying...but you're also still waiting.

This song is an anthem to wanting. Wanting more--more life, more chances, more love, more. Just more. If you're not satisfied, this is the song for you.
Posted by Unknown at 8:29 AM No comments:

The other day, I had the very great pleasure of giving a workshop at Malaprops about writing to celebrate the release of all three Paper Hearts books. The turn out was amazing--especially considering the roads were closed for a Mardi Gras parade and the Superbowl was on!


I've been working on the workshop for several weeks now (shout out to my friend, Laura, who let me test it on her students first!). And I think I finally have it the way I want it to be.

The workshop is about how to take a base idea and turn it into a novel. It covers inspiration, publishing paths, writing craft, and concludes with a timeline of my latest book, A World Without You, and how long it took to go from initial idea to published book on the shelves.

The workshop is interactive and comes with a handout and two places to stop and try out activities before continuing. With a question and answer session at the end, the entire program is between an hour and an hour and a half long.

While I love speaking to people in person and really getting hands on with people who want to learn--I'm still a teacher in my heart!--I also want to make sure that this information is available to everyone, and to give people who attend the workshops a chance to go back over what they learned. To that end, I'm putting the entire presentation, as well as all the handouts, online. Just click here for them all.  This link also shows you some of the other downloadables and resources I have accompanying the Paper Hearts series.

If you find these helpful, please feel free to share them with other writerly sorts!