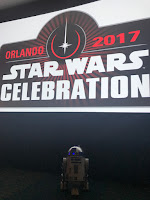 I am still reeling from my glorious time at Star Wars Celebration! It was honestly unlike any convention I've ever been to before; not just because it was focused on one topic, but because the people were among the very best. Despite the lines and inevitable congestion any large con has, despite being in overflow areas when panels were full, despite any of the countless foibles of con life, every single person I saw had a smile on their faces. It was a joyous experience, to be sure!

Check out my Instagram for pictures of my favorite souvenirs from Celebration--and stick around to enter the giveaways I've got going on all week there!

When I first arrived, I'll confess that I was not certain at first where to go. The convention hall is huge and I started wandering, hoping I was heading in the right direction.

Then I saw this guy: 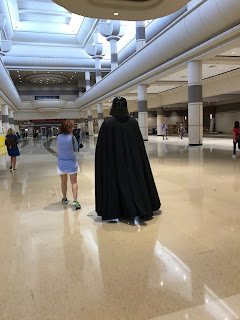 And I knew I was in the right area.

Soon after, I saw what was to be my favorite cosplay of the whole weekend, but I was still in awe of everything and neglected to get a better picture! 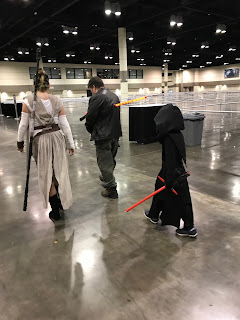 Han Solo and his Lil Kylo, complete with a glowing lightsaber right through the feels.

Of course, there was tons of amazing cosplay at this con.

I snagged a pic with the first Jyn I saw: 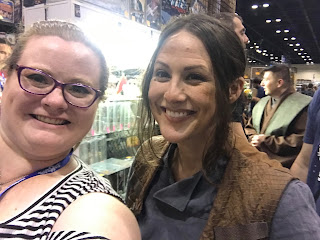 And I was hoping to see some stormtroopers on holiday
(doesn't Scariff remind you of an ideal holiday experience?)
and I wasn't disappointed: 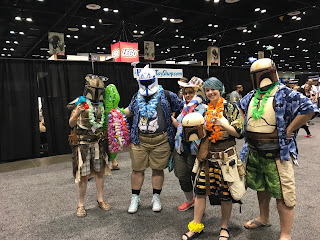 Some of my favorite cosplay, though, is the kind that blends together different fandoms. The DC world was well represented with this Wonder Woman and Superman: 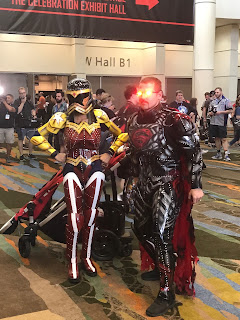 As well as this too-cute Joker and Batman combo: 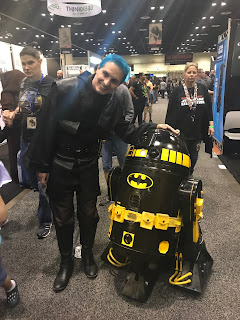 But by far, my faves were these guys: 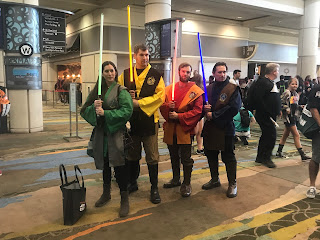 Beyond the cosplay, one of the best experiences was being on the main floor when the trailer for The Last Jedi came out. I didn't get to be in the main panel (which: burning envy for everyone who got those cool red posters), but I was on the main floor, watching the giant screens over the livestream area.

It was such an amazing experience. I was with my publicist, walking around the main floor, exploring the con, and it's like, as one, everyone stopped. The group knew. Every face turned to the screen to watch the panel. It was a huge, shared experience with all these fans, and that made it so much better. I loved as the new character Rose was revealed, as Mark Hamill called Daisy and John his children, as the director talked about taking pictures of the set, as they all spoke of filming with Carrie Fisher.

But what I loved the most was watching it with several hundred of my Star Wars friends. 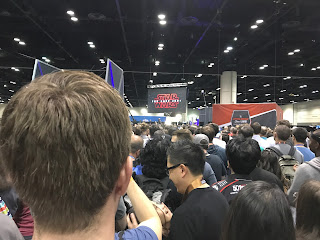 This photo doesn't look like much, I know. It's a crowd of people with the trailer screen up top. But honestly, I wish you could have been there. That trailer was epic, and the crowd made it more so. Everyone gasped in all the right places. Whispers of "I knew it!" or "Oh no!" or "Yesssss," pinged around the area. No one was mobbing or pushing or shoving--we were all just staring up, watching this thing, filling with ideas and hope for the new story. Together. 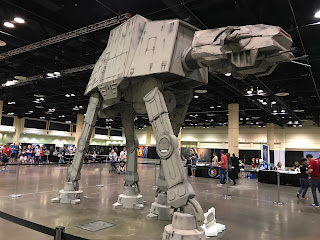 And the atmosphere was very apropos. 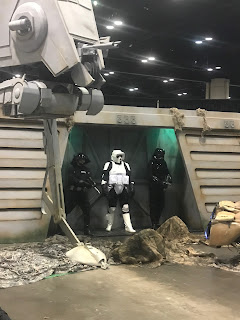 I wish I'd had more times for pictures! And also that they'd let me drive a walker!

After doing some businessy stuff (yay, interviews!), I got to actually go backstage of the area where I saw the trailer. The Star Wars Show Livestream was set up there, and (eep!) I was going to be on it! 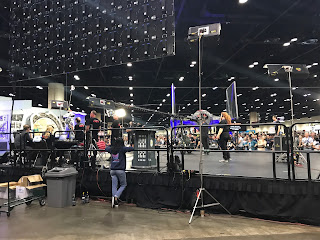 There was a moment there, while I was waiting to go on stage, where I just sort of stared at it all in awe that this was real life. 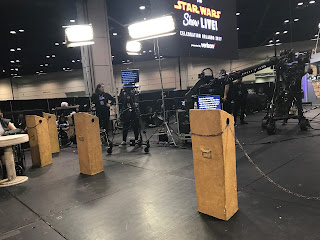 And then I got on stage, and there were teleprompters, and they had my name on them. 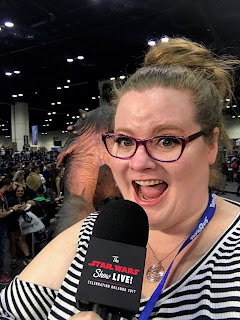 And they put a microphone in my hand and it was real and totally not a figment of my imagination and whaaaaat. 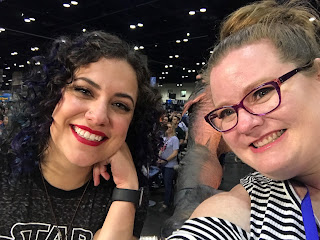 And then Andi Gutierrez interviewed me and I have no idea what I said, like zero concept, because my brain had ascended to a totally different plane of existence and I was dead by this point.

Oh wait, I know what I said, because there's a film record of it:

If you fast-forward to around the 5:40 mark, you'll catch my interview.

If I look like an idiot on screen, keep in mind that internally, my brain was doing this:

So here's hoping I don't look too dumb...

Anyway! After that, it was time for Super Intimidating Thing #2, namely, the Lucasfilm Publishing panel! Before that, however, I hung out backstage (because my feet hurt and I was done walking forever) where I bumped into OH YOU KNOW JUST TIMOTHY FREAKING ZAHN, 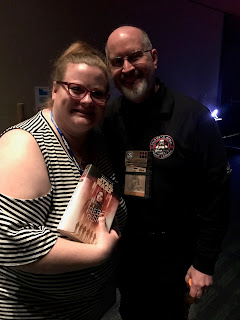 And guys, he is a delight. Just a wonderful human being. I was super trying not to throw up from nerves, and here is Timothy Zahn being charming and kind and friendly and just wonderful.

Which helped because that panel? It was huge:

It was honestly such an honor to be on stage with these fantastic people, from my editors at Lucasfilm Publishing to my fellow authors and Star Wars nerds. We got to geek out together.

And they gave away an early copy of Rebel Rising to a girl dressed as Jyn and my little black heart beat with happiness.

My favorite moment is probably when they asked one of the last questions: if we could write anything in the Star Wars universe, what would it be? I knew my answer: I would love to write a YA Princess Leia story.

And then they announced upcoming books for next year: 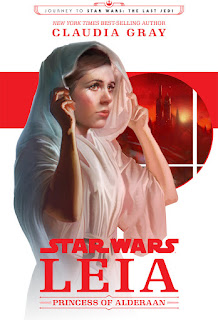 Oh, the irony! But to be 100% honest, if I can't write it, I'm so glad that Claudia Gray is. She wrote my favorite Star Wars book to date, Bloodline, which is all about Princess Leia as an adult. She knows Leia, and I'm just excited that I'll get to read this book and experience the story as a fan!

Other books were announced at the panel, including Delilah Dawson's upcoming Phasma novel! Another character I'm excited to learn more about--I can't want to see what she's like under the silver helmet. 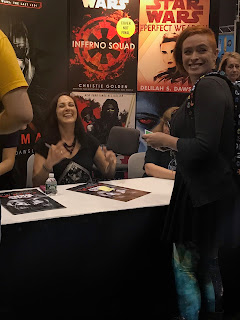 Bonus pic of me awkwardly crouching next to Chopper. 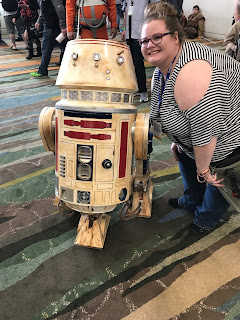 If you've not seen Star Wars Rebels, Chopper is the main droid on that show. And he's the best. He rivals even my beloved K2SO.

HEY PS: DON'T FORGET THAT IF YOU ORDER REBEL RISING FROM MALAPROPS, YOU GET A FREE GIFT!


PREORDER GIVEAWAY!!! 🚀 The first 100 people to order REBEL RISING from @malapropsbookstore will get a signed copy + a limited edition enamel pin (shown in greater detail on the next pics)! 🙌🏻 This is an automatic free gift with purchase--just order your copy through Malaprops and the first 100 people will automatically get the gift shipped with their order! 🎁 The pins are GORGEOUS, no?! So shiny and glittery! ✨
A post shared by Beth Revis (@bethrevis) on Apr 24, 2017 at 12:20pm PDT