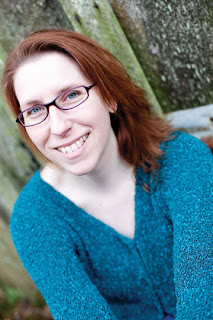 Today I'm pleased to welcome Janice Hardy, author of THE SHIFTER, BLUE FIRE, and DARKFALL, a trilogy that is superb. I started with THE SHIFTER when it first released, and was hooked. Now I'm just waiting to get my hands on a copy of the last book, DARKFALL! This trilogy takes place in a world where some characters have the ability to shift pain or sickness away from a person. Of course, keep in mind that the title of the trilogy as a whole is THE HEALING WARS...in a world where healing can be done with a simple touch, healing itself becomes a commodity.

Whatever your expecting about the books: don't. Janice has twists and turns aplenty throughout, and the ending's impossible to guess.

Yes, I’m Evil. At Least to My Characters

There are some writers who cringe at the thought of putting their characters into danger. Caring authors who encourage and look after their fictional charges as they send them on their literary ways.

I’m not one of those authors.

I love to torture my characters. I cackle with glee when I think up something horrible to do to them. Maybe it’s my dark side coming out, I don’t know. 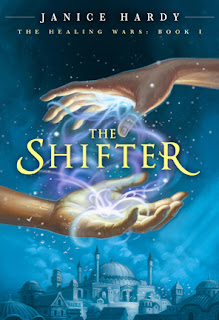 Take the characters in my teen fantasy series, The Healing Wars. The heroine, Nya, never gets a break from me. First, I kill most of her family (this is before the story opens, so don’t worry). Then, I give her an evil “is it a blessing or a curse?” magical ability (she can heal, but only if she shifts pain from one person to another). To add insult to this injury, I give her a little sister who can heal without the nasty drawback and all its nastier side-effects (because ya know, being jealous of your little sister really bites)

You’d think that would be enough to make my dark side happy, but no. It wanted more. It whispered into my mind…let’s take away that little sister, and make poor Nya have to reveal the one secret she’s been hiding her whole life in order to save her. And while we’re at it, let’s toss in some agonizing decisions, some physical pain and suffering, and a mistake that will haunt her rest of her life. (and all that’s just in the first book, The Shifter)

I’m smiling as I write this. Really. I told you I was evil.

This attitude did trip me up a bit when I got to the third and final book of the series, Darkfall. Okay sure, I got to be the most nasty and horrible I’ve ever been to Nya because it’s the last book, but I also tend to like happy endings (“happy” being relative of course). I do have a light side to balance my dark. Could I do all those terrible things to Nya and just…leave her like that? 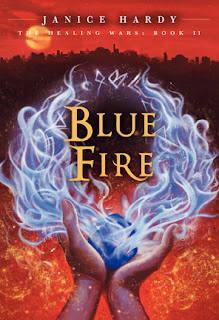 My light side wanted some reward for all Nya’s hard work and pain, but my dark side couldn’t give her a totally happy ending (that’s just not right). So I compromised. I may have torn her world apart, killed off some of her friends and destroyed her home, but I also gave her a few things to ease some of that suffering in the end. I got to be evil, and she got a “happy” ending. Kinda.

Though I bet overall, Nya is happier that I’m finally done with her.

At least for now. But you never know when the urge to be evil will strike again.

If you’re a writer, do you like to be naughty or nice to your characters? For readers, do you prefer a character who gets trouble heaped on them or one who has an easier life?

Janice Hardy always wondered about the darker side of healing. For her fantasy trilogy THE HEALING WARS, she tapped into her own dark side to create a world where healing was dangerous, and those with the best intentions often made the worst choices. Her books include THE SHIFTER, BLUE FIRE, and DARKFALL from Balzer+Bray/Harper Collins.  You can visit her online at www.janicehardy.com or chat with her about writing on her blog, The Other Side of the Story. blog.janicehardy.com. 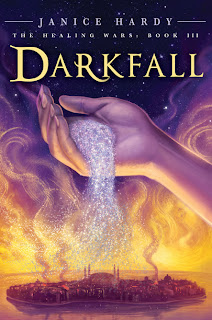 Nya’s the one who brought it. And the people love her for it.

With Baseer in shambles and Geveg now an impenetrable military stronghold, Nya and the Underground have fled to a safer location—without Tali. Nya is guilt-ridden over leaving her sister behind and vows to find her, but with the rebellion in full swing and refugees flooding the Three Territories, she fears she never will.

The Duke, desperate to reclaim the throne as his own, has rallied his powerful army. And they are on the move, destroying anyone who gets in the way.

To save her sister, her family, and her people, Nya needs to stay ahead of the Duke’s army and find a way to build one of her own. Past hurts must be healed, past wrongs must be righted, and Nya must decide: Is she merely a pawn in the rebellion, a symbol of hope—or is she ready to be a hero?

And finally: if you live in the California, Washington, Oregon, New York or New England areas, check out the group tour Stages on Pages that features several of my fellow Bookanistas and Elevensies!

Ooooooh. I love cruel authors. In fact, I've been known to send "congrats, murderer" emails to writer friends. ;) MUST PICK THESE UP!!!

I love seeing characters have to fight tooth and nail for their goals. If they just get their rewards handed to them, it's dull. That said, I am a sucker for a happy ending. I like to see characters rewarded for what they've been through and how they've faced their problems.

Of course, that means I also want to see characters get their comeuppance for any wrongs they've committed.

The more evil the better, I say.

I love to think about what my character is most afraid of, or what they least want to happen, and then make sure it happens.

Oh, I do indeed torture my characters. Well, sometimes, anyway. Maybe it's from when I was a kid murdering Sim people?

It's just that evil is so fun... Yeah, I like when the authors are nasty to their characters, though it does lead to a bit of nail-biting on my part.

I like to do nasty things to characters, but I have the hardest time actually killing anyone -even minor characters. I have a feeling that messes with my suspense.

I agree with Paul, "I like to see characters rewarded for what they've been through and how they've faced their problems. And, you wouldn't want to be in the same room with me when the bad guy is getting what he deserves, I'm Over-the-top!

I'm the same, dellgirl. I think the only thing that makes me love a book more than the heroes getting their rewards is seeing the villain get theirs!

Thanks all! And sorry for a late response, I was out of town at a conference and had no access to the web (and no time to breathe even if I did!)

Carrie, I love that! I have mystery writer friends so I'll have to remember that, lol.

Sam, that's a great plan. It's like "what the worst than can happen" but more targeted. I like that.

Ruth, LOL I did that too! I love doing weird social experiments on them. Put extreme personalities in a house and take the door away. bwahahaha.

Chicory, killing them off can be tough. I didn't *plan* on killing anyone in the series, but there were several I knew I had to knock off when I got to that point. A friend still hasn't forgiven me for one of them :) But she agrees it had to happen.

buy klonopin klonopin .5 vs xanax .5 - will 1.5mg of klonopin get you high

buy ativan how to order lorazepam online - ativan overdose many