You're Invited...to a Virtual Party Celebration!

I've always been told that when new parents have a baby, they do everything with that baby. Hundreds of photos, videos, record every moment, journals, etc. But by the time the parents have a second baby...they're just tired! They forget to fill out the baby book, they don't bother with as many photos.

I approached this year with the same fashion. A MILLION SUNS is my second baby...and boy am I tired! Did anyone care enough for me to bother with a launch party? Should I bother with another big thing on my website?

Well, being a second child myself, I decided that I didn't want to make A MILLION SUNS feel forgotten. (Also: friends of the book threatened mutiny if I forewent a party!) So in true Beth Revis fashion, we're going to celebrate the new year with a PARTY!! And because so many of you aren't in my local area, I wanted to make sure that everyone, no matter where you live, can participate.

Besides, you guys know the answer to this, right? When there's an option to party or not, you should...party hard!

So, I'm organizing the virtual party just like a real party. Which means there will be...

PARTY HOSTS
Every hour, from 8am until 5pm, there will be a new post on a new blog from around the blogosphere. Each post will have special content about the books, and a chance to win a prize! There will be direct links on Tuesday, when the party goes live, but the sites will be:

PARTY GAMES
Secretly I think the best games are party games. So I'm building a game around the virtual party. I'll announce just what that game is on Tuesday, but let me assure you of two things:

PARTY HANGOUT
But you don't just go to a party to play games and get prizes, right? Heck, half the fun of the party is hanging out with the other people at the party!

So, during the live launch party, from 7-9pm, there will be live updates and tweets on Twitter, so you'll be able to participate in the launch party!

Make sure to follow @AMillionSuns, which will be manned by my husband during the launch party. He's going to transcribe highlights from the live launch party, take Twitter questions for us to answer directly at the event, and host some fun giveaways during the party.

There will also be an official chat room for Twitter. To join, all you have to do is sign into Twitter, then go to the TweetChat room here. You're welcome to check it out now, but it will be manned and live for the official chat from 7-9pm, Eastern Standard Time. I might pop in and out throughout January 10th to say hi to any early or late arrivals to the chat room, so please feel free to hangout at the official virtual hangout :)

Also: you can always just use the official launch hashtag to hangout, too: #amslaunch

At every single blog from the party hosts up above, you're going to have a chance to win a prize--it'll be a random drawing, and open internationally. Each stop will have a party favor to give to one commenter, and that party favor includes signed books, AtU swag, and stuff from...NASA! (heckyeah! NASA! Special thanks to Ex Libris Kate for donating the NASA goodies!)

But wait! There's MORE!
If you order A MILLION SUNS from my local indie bookstore,
Fireside Books and Gifts,
you will also receive some special swag! 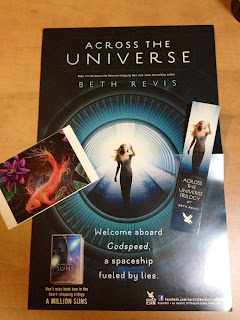 Everyone who orders their book from Fireside will get:
-a signed, personalized book (obviously)
-a poster
-a bookmark
and
-a limited edition koi fish art print

You can order your signed and personalized copy of
A MILLION SUNS
or
ACROSS THE UNIVERSE
from Fireside here:

Great idea!! Count me in!! Do the bookstore ship internationally? I can oly wish.

See you at the party!

Yay! I'm not on twitter but I'll definitely try and attend the blog side of the party! Thanks and I'm soooo excited about the new book!
Btw, the link to Secret of the Stars is linkied wrong. Just thought yo should know :)

The party sounds very exciting! I'll be trying my best to join in... just gotta figure out the time differences.

This sounds like awesome fun! I hope that it's at a decent time for me to be awake. Will have to go check. ;-)

I've put in my order (via Fireside of course) and I am so excited for you Beth. I may even have to take the plunge and get a Twitter account just so I can join in on the fun.

Aw, man! I already preordered AMS from Barnes and Noble. :( And already own AtU. Oh, well. At least I get to join in on this AMAZING launch party, which makes up for buying both books threefold.

Plus, threefold is an awesome word.

*waves hands in the air*