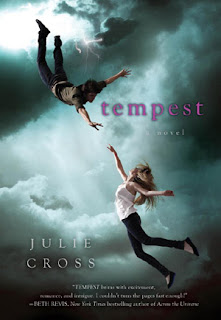 So yesterday I told you all about my reading experience with TEMPEST by Julie Cross. Basically: I literally couldn't turn the pages fast enough. I was on the edge of my seat the whole time! I was truly, sincerely worried about the life of a main character, and the fate of the narrator. Which is actually one of my favorite things about TEMPEST:

Julie Cross made me believe that any character--including the narrator--might not make it out of the story whole.


This is a very hard thing to do as a writer. Basically, a reader goes into the book knowing that certain characters are safe. Of course the hero and heroine make it out of live! The standard reader goes into any novel believe this so fully that making the reader convinced that this might not actually be the case shows a very deft writing hand.

Of course, I didn't always love the characters. In fact, when I first met Jackson I would have been sort of okay if he bit the dust. He was honestly kind of a jerk--he's less than flattering (unfairly so, imo) to his girlfriend's roommate, and while his thoughts on sex and the things he notices is very believeable for a boy narrator, it didn't always endear him to me. Which is another thing I loved about the book:

The narrator, Jackson, truly changes from the first page to the last.


This is another thing that I really respect, author to author. Again, the typical reader expects certain things--such as the character staying basically the same. I mean, you expect the main character to change some, or that a bad guy has an epiphany, Scrooge-style, by the end, but Jackson has a very interesting, and realistic, growth. He doesn't change all at once, nor does he become an angel--but throughout the story, through the course of his experiences, he changes from a somewhat cocky jerk to a guy who's honestly trying to do the right thing, but not sure he can make it.

And have I mentioned he's a guy? Because that's another thing I liked:

This is one of the most believable books with a boy narrator that I've ever read.


I've had my eye out for boy narrator since before I wrote Elder's POV, and I have to said: Julie nailed it. Jackson is boy, through-and-through. I really can't explain it, but I will say that there was never a moment I doubted Jackson's voice. He sounded real.

This is me basically fangirling in TEMPEST's general direction. And you should too! If you've not yet, make sure to enter my contest for a SIGNED copy of TEMPEST in my previous post. I hope you enjoy it as much as I did!
Posted by Unknown at 12:30 AM

I am so excited to read this book!

My favorite non-contemporary boy narrator is Sean Kendrick from Maggie Stiefvater's The Scorpio Races. He is one of the few male narrators I've encountered that actually made me believe that not only was he a real guy, but the author who wrote his chapters could have been a guy as well!:)

Sounds like a good book! Thanks for the review... those are things I respect from authors, too.

Sounds amazing! If i wanted to read Tempest before, now I'm DESPERATE for it! Amazing job Julie and I hope you have an awesome time as a debut author!