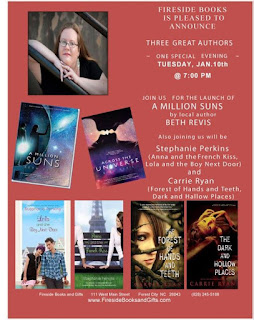 You might have noticed that I only just now updated the News page of my website. I have been terribly remiss about my recent events (except on Facebook. I actually updated FB, yay!)

Which is sad-making because I actually have a ton of events that I want to tell you about. 2012 is the year of travel! And it's also the year of Beth-doesn't-want-to-do-events-alone-so-she-keeps-begging-authors-to-join-her-for-shizz.

FIRST: THE LAUNCH OF A MILLION SUNS! with special guests Stephanie Perkins and Carrie Ryan!


WHERE: Fireside Books and Gifts, 111 Main Street, Forest City, NC. (Please note that this is a change in address from last year; the store moved to Main Street)


WHO: Me, Stephanie Perkins (Anna and the French Kiss and Lola and the Boy Next Door), and Carrie Ryan (The Forest of Hands and Teeth, The Dead-Tossed Waves, and The Dark and Hollow Places).


WHAT: A launch part for A Million Suns PLUS special guests PLUS cake pops PLUS surprise prizes PLUS a virtual party at the same time PLUS MORE. (Seriously)

MORE: Guys, I'm so excited about this. Fireside is my home bookstore, and I love doing hometown events. Also, I get to do this one with Steph and Carrie, and that rocks. Additionally, this event will be special because it's happening at the same time as...

THE VIRTUAL PARTY, OPEN TO THE WHOLE FREAKING WORLD!!!!!!
(I think that needs some more exclamation marks, but I've hit my quota)


WHERE: The World Wide Web, baby! And I mean world-wide!


WHAT: A VIRTUAL party online. More details on this will be revealed later today, but it involves:


MORE: This is my way of bringing all of you guys, the wonderful people who've supported me this year, in on the biggest party of the year. We're doing all we can--including through Twitter, video, and more--to really make you feel as if you're a part of the event. And of course the best part of a party is the presents--so we're going to have plenty of those to give to you!)

But that's not my only event this month! Also, we have... 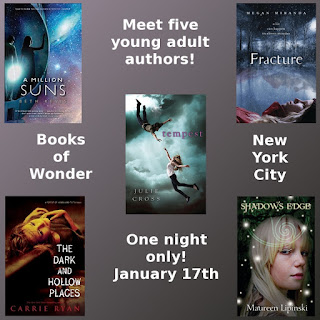 WHERE: Books of Wonder Bookstore

WHO: Me, Julie Cross (Tempest), Megan Miranda (Fracture), Carrie Ryan (The Forest of Hands and Teeth, The Dead-Tossed Waves, and The Dark and Hollow Places), and Maureen Lipinski (Shadow's Edge)

WHAT: A five-author panel as we discuss books, YA, writing, and more! Followed by a signing with all the authors.

MORE: I'm really stoked about this one, too! Not the least because I loved Tempest so much that I blurbed it. Seriously. I'm a sucker for time travel, but what really sold me on this story was the narrator. He starts out as a total (but realistic) jerk, and ends up doing his best to be a good guy. <3 Also: Fracture by Megan Miranda was full of twists and turns...and y'all know I'm a Carrie-fangirl...and I've not met Maureen yet, but I'm really looking forward to it!

And finally, for the month of January... 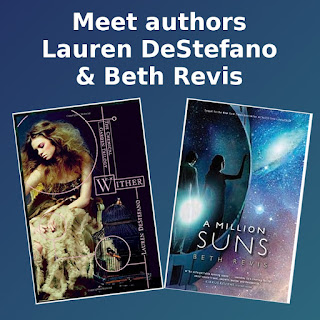 WHO: Me, Lauren DeStefano (Wither and the up-coming Fever)

WHAT: I suspect there will be shenanigans. Basically, we're going to talk and then sign books, and somewhere in there hilarity will ensure.

MORE: Squee!! As much as I fangirl in Lauren's general direction, and despite the hundreds (I think) emails we've exchanged, we've never actually met in real life before! The building might implode from our combined forces. It's a worry.

And that's January! The good news is, if you want to meet me in real life and I'm not coming near you this month...I'll be going on a huge tour in the middle of February. I've not been told that I'm allowed to let you guys know where I'm going, but I think it's safe to say that it'll be coast to coast, with some stops in the middle. Also, I'll be keeping up the tradition of not doing events solo, as this will be another group tour (yay!). If, by chance, you like authors who write books about witches, wolves, or dystopian worlds, then you're in luck!
Posted by Unknown at 10:38 PM

Ok, I'm totally crossing my fingers for a stop in Chicago!! And I'll definitely be stopping by for the party next week!!

Zomg seriously? Favorite authors EVAR getting together for a party that I can actually "attend" (online), then another favorite author comments on it?!?! I think I must be dead, and this is heaven. Sorry, a little hero worship there. :P

PLEASE come to Southern California! Enjoy your awesome January, and hope to see you soon (again, IN SOUTHERN CALIFORNIA!)! :D

I look forward to participating online. Sounds so exciting.

Wow, that is a lot of awesome!

Since you're not coming to Idaho, I guess I'll have to stop by the virtual party! *grin*

It would be so awesome if you came to california~! I just want to tell you I frexing love your book! So can't wait till Jan,10! Going to be awesome~!

Aww this sounds so fun! I'd have loved to join the online party- but since I'm living on the other side of the world, and have school on that time, I'm gonna miss it. ;(

Hope you guys have a blast! :)

I'm coming to the Fireside event! I should probably read The Forest of Hands and Teeth first....

I can't wait to read A Million Suns!!

@Susan Kaye Quinn: I hope you come back to read this because she'll be at Anderson's Books in Naperville on 2/15/2012 with these others:

I'm a regular at these events, Anderson's brings in all the top YA & kid's authors (and some pretty important adult market authors too) :)

Looking forward to the online party! I'm halfway through Across the Universe, though... hope I don't get too spoiled! (I just did, slightly, looking at the comments for your newest post!!!)

Awww! First of all, most of the events are in states hundreds of miles away from me, second, they are on the days I have school so I can't really do much, and third, I'm so going to miss doing this with everyone :( I was so looking forward to it too. But, I am happy that there are some authors who are inclined on helping Mrs Revis out. I really loved Wither and Anna and the French Kiss and can't wait to read the next books for both. Anyways, I'll try to do the World Wide Web one if I have time to. Thank you for the chance at meeting authors and learning new stuff about them and of course the giveaways!

Oh how I wish you would take a stop in dear old Atlanta Georgia <3I am standing on edge to read A million suns, but kinda sad I have to wait a full year to read Shades of Earth! :( , but :)