A Whole Pile of Awesome

Here is something I know: I might have made the NY Times Bestselling list, but I only did that because of you. Every single one of you who bought the book, read the book, shared the book. I've seen the numbers. I'm no John Green (so cool he's ice)--this was not a sure thing, it was not an easy win, it was not something that would have happened at all without you. So--seriously, and from the bottom of my heart--thank you.

This past week was amazing--I had a great time at the launch party in my hometown, and then had a blast at Books of Wonder in NYC and RJ Julia's in CT. Fortunately, right now I've got a few weeks to catch my breath...because starting February 15th, I'm going to be BREATHLESS!! 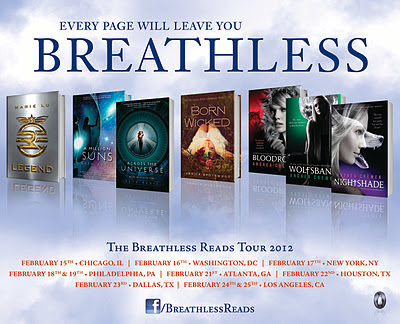 Okay, okay, I know: lame pun! But also: true! Breathless Reads 2012 kicks off February 15th, and it's even bigger than last year!

Go to Facebook.com/BreathlessReads for all the info on the events! This year we're going to 8 cities across the nation, so chances are we'll be in a city near year--if so, I hope you'll come out and meet me and the other awesome writers on the tour!
Posted by Unknown at 2:47 PM

I'll be at books of wonder!

We read and bought and promoted your book because it is, well, AWESOME!!!!

I would not have been able to resist a pun like either. ;)

Huge congratulations, but I knew it was coming. Not because I'm psychic, mind, but I do have a time machine.

So glad your week went so well. Just finished your book. It was awesome!

Oh man, you're going to be in Highlands Ranch... on a Friday night... I so want to go, but three hours one way means a hotel stay and it's not in the budget. I'll think positive thoughts for an awesome turnout when you're over there.

Alas, I'm not in the US to see your tour, but I hope you have a great time, and I look forward to hearing about how it goes! :D

Last month, a friend alerted me that you would be coming to Chicago on the 15th!! Can't wait to see you IRL!