Things to Do on the Day Your Book Launches

You know: it was kind of nice to get buried under the snow and be forced to stay inside. I'd been running around like mad to get everything working for the launch party--arranging cupcakes to be made, putting up posters, calling newspapers, sending invites, and one thing after another.

So when the snow came and said, "Nuh-huh," I was actually mostly okay with it. Instead of spending the day rolling my hair and stressing about being witty, I spent 70% of the day in my pajamas, ate terrible junk food with my husband, and played with my dog.

And then we made a snowman. 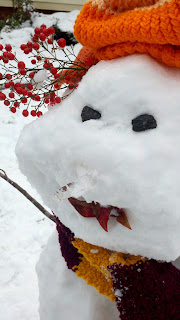 So of course I had to add a Gryffindor scarf and a Jayne hat, but then I found some red berries, and stuck them in the snowman's head, and suddenly it wasn't just a snowman... 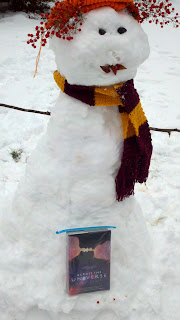 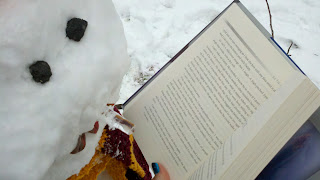 And lookit! She even likes to read!

The husband and I spent rather a lot of time trying to make it look like SnowAmy was actually reading, but her arms are made of tree branches (so she doesn't have opposable thumbs) and her body is made of snow (which is made of water, which is not healthful for books), so in the end, we gave up. 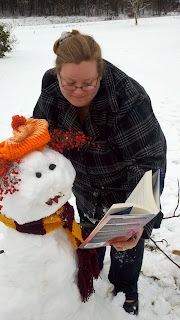 She's a GREAT listener, but I don't think she actually paid attention....her eyes sort of glazed over....
Posted by Unknown at 11:30 AM

Can't wait to read your book. It looks AMAZING!

Awesome! Sounds like a perfect way to spend your launch day. :)

Beth, I learned about your book yesterday from another teacher's blog (http://kaymcgriff.edublogs.org/). I'm in the midst of snow day #3, so it was great to see a book recommendation. I read the first 111 pages that were available online yesterday, I got hooked, and I purchased the book on my Kindle so I could finish it.

I really enjoyed reading your book! It gave me a lot to think about, and I will be purchasing a traditional copy as well to add to my sixth grade Earth science class library.

Great work - and I'm glad you and your book enjoyed your snow day :)

I like that snowman mouth. Fantastic! Hope you had a super marvelous day!

Her eyes glazed over...
*Snarple*
:)
You are having so much fun Beth!
Thanks for sharing some of it with us.
All the best,
Rob

That's hysterical. I love how much fun you're having with this!

I LOVE the picture of her glazed-over eyes reading your book. You should enter that in your contest. Oh wait, you can't. Bummer. Anyway, fun pictures. I finally got your book last night and can't wait to read it!

Best snowman (snowgirl) ever. So cute. I like that you made the best of an inconvenient snow day!

Nice, I can't ever get MY snowmen to read. *grumble grumble* lol.

So the book launch is definitely on Thursday? And are the roads bad?

Love your attitude, Beth. Snow going to ruin my book launch, I'll play in it! You've brought the making lemonade out of lemons up a notch!

OMG, I just laughed so hard! Brilliant. And I'm halfway thru your book! LOVE IT. LOVE, LOVE, LOVE.

Snow FTW! We've got some here, and it's lovely. Enjoy your snow. :)

LOL, so cute! I love the red berries for hair.

On another note, after that 111 pg excerpt, I don't know if I can hold out for the weekend to get AtU. I've conned Alz into picking it up for me if she goes to the mall today. EXCITED!

How way cute and cool!

Ha! That is awesome! Great snowman.

I'm gonna email you the photos in a few minutes.

We've had the invasion of the Snowpeople here in Mississippi.

Can't wait to get my copy!

Okay, I'm finally accepting that I won't win a copy of AtU and going to buy my own tonight at the store! Enough is enough!

Congrats, Beth, and thanks: you're such an inspiration to me!

Sounds like a great day. And congrats on the great review at Fantastic Book Review. http://www.fantasticbookreview.com/

Aw, so cute! Good luck with your party tomorrow!

Awesome! And now every time I read your book, I'm going to think of Amy as a snowman. Ha ha!