The Introvert's Guide to Selling Books at a Con 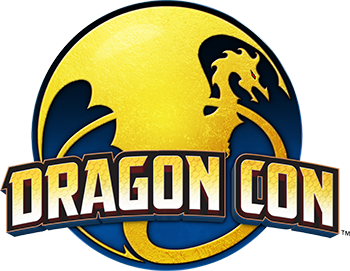 Last week, I attended DragonCon, a huge convention with over 60,000 people in attendance. It was full of exactly the kind of people who I know (I hope!) would like my book--this is my audience, and my challenge this weekend was to find the most effective ways to reach them.

Now, to a lot of people, I seem like an extrovert. I'm not that shy, and I'm okay in front of audiences. But I'm actually very introverted. My friend Andrea Cremer summed it up perfectly: an extrovert gets energy from being around other people; an introvert recharges by being alone. And in those terms, I'm extraordinarily introverted. I can be in a crowd or in front of audiences, but it drains me. Being social is as draining for me as working out. Even being on Skype--this is why I limit the number of events and I do. Doing an event for an hour takes me all day to hype myself up and then to recover after. In very stressful, very big events, I will often just sit in silence in a room by myself to recover.

So DragonCon, packed to the brim with people, is like an Iron Man Triathlon to me.

As a fan, DragonCon was just solid fun. Seeing panels that were hugely interesting, people watching the cosplay, geeking out over fun things. As an introverted author who wanted to promo and maybe even sell her books, it was a bit more complicated.

Here's how I tackled the weekend not as a fan, but as an introverted author.


I know some people are really in favor of what I call the "car salesman approach." They stand up at their table, they literally pull people over and pitch their books. They're charismatic and they draw people in and they sell their books with everything they have. At RT two years ago, I sat next to a person who did this, and I saw him sell a dozen books this way. It works. But it doesn't work for me. I can't do that. I can't be that person.

But after two signings at DragonCon with only about ten people--or less!--showing up, I knew I had to try something different.

And that's where my table design came in. 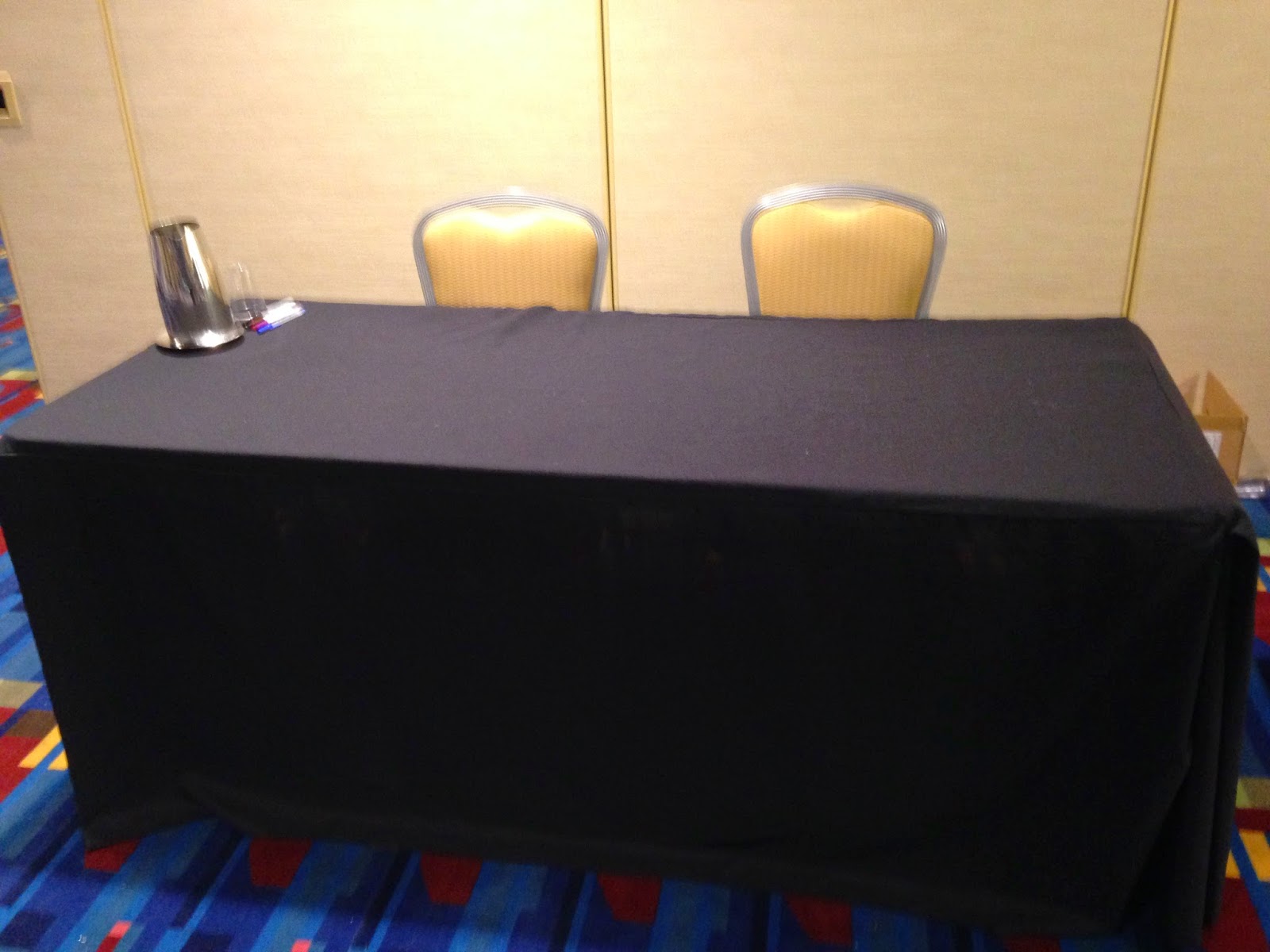 This is what the table looks like when you get there. Just a table, a water pitcher, and two chairs. And for the past two years at Dragon Con, I left it like that. The only thing I added was a single copy of my book, propped up for display, and a Sharpie. And, to be honest, when I looked around me at DragonCon this year, the other authors were doing the exact same thing.

This year, I added more things: 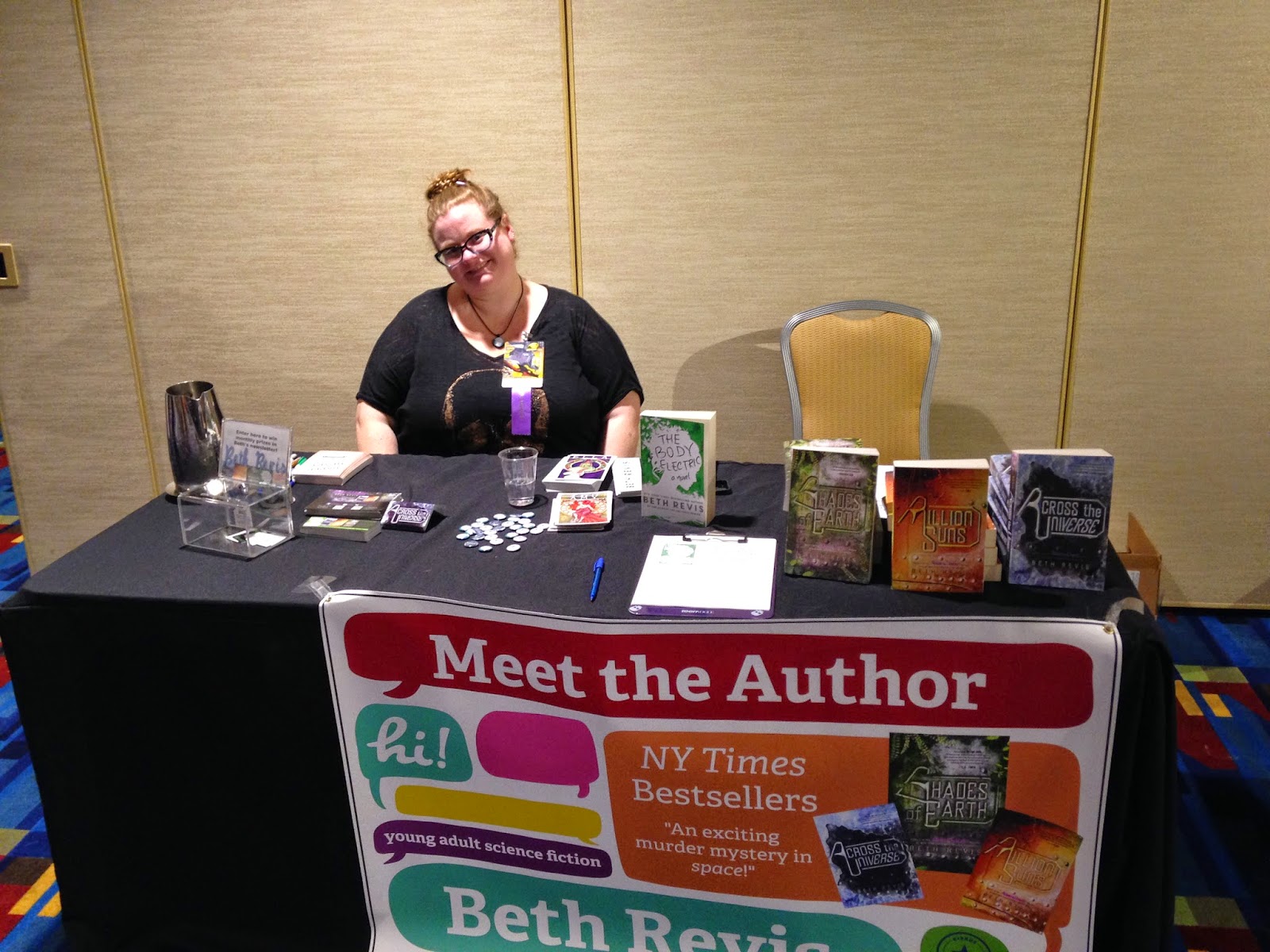 And this year, by no coincidence, I also sold around 40 books. Here's a list:
I've had a similar table set-up at the RT Convention, and I do feel that doing something like this, where your table can do the selling and talking for you, is the perfect solution for the introvert. What about you? What ideas do you have to help introverts reach readers?