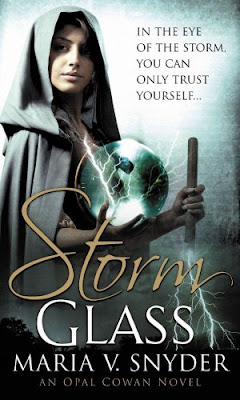 Why I Bought This Book: STORM GLASS had been on my radar for awhile when Midas PR sent me a review copy. And lemme tell you: I devoured that copy. Three nights in a row I stayed up until 1am reading!

Elsewhere on the web: My review of the first two books in the STUDY trilogy here, and my review of FIRE STUDY here (the main character of this new series features in both FIRE STUDY and MAGIC STUDY). Author's website here (click around--she includes bonus stories if you sign up for her newsletter, and a chance to win signed copies of her book). The First Novels Club did a guest post with Maria and a review of STORM GLASS here. Also, Maria's on GoodReads (and does great posts on the GR blog).

Five Sentence Summary: Opal has what she thinks is a useless magical gift: the ability to trap magic in glass. That's it. But when the Stormdancer tribe, which uses glass globes to capture the energy of storms and use it in factories, needs Opal's help, she finally finds a use to her seemingly pointless ability. As she learns more about magic and glass, however, she discovers that not only is her gift very much more important than she ever thought, it makes her more powerful--and more dangerous--than she ever imagined.

So what can we, as writers, learn from this book?
NOTE: As always, highlight for spoilers.

That's what Snyder did here.

Opal is so different from Yalena, not just in her past, her setting, and her knowledge, but in her voice. As I read, there were situations where I knew what Yalena would think, or how Yalena would react--and Opal didn't think or react in that way. Yalena is strong, impulsive, and confrontational. Opal is strong but self-doubting, careful, and meek. Snyder doesn't just tell us this, but shows us this through the voice of the novel. Not to say that Opal is weak--she's just different--beautifully, achingly different.

2. The little details mean a lot: My absolute favorite thing about a book is when the author leaves us clues about the plot, but I don't catch them. I LOVE THAT SO MUCH. That's what made the Harry Potter series sing for me: JK Rowling wrote about polyjuice potion in book 2, then used it as a plot twist in book 4; the vanishing cabinet was a throw-away detail in book 5, the crux of the plot in book 6. It's when the author gives us all the tools to solve the plot, but writes so cleverly that we don't even think of them that makes a book brilliant to me. Snyder did that here in STORM GLASS. In the first third of the book, Opal meets a man who can shape-shift so convincingly that she believes he's someone she knows and trusts until she notices his shadow is different. From that point on, Snyder's given me the clue: there's a character who can appear to be someone else. But later, when Opal's friend seems to act different from usual, speak differently, etc....I didn't catch on that he actually WAS different and was the shape-shifter in disguise! I figured it out about a paragraph before Opal, and was still shocked to see how cleverly Snyder layered in that clue.

3. Consequences to Magic: This is one of the things I like most about Snyder's writing, from the STUDY series to this new one. Magic has consequences. While this is shown most often in stories where magic weakens a character, Snyder is never one to go for the cliche. Instead, the magic Opal uses makes her a danger to those around her, someone to be feared, someone to be used by the bad guys. The consequence isn't something that will hurt Opal--it's something that affects the way she's viewed in her society. Doing it this way shows just how deftly Snyder weaves her magic-building and world-building skills--the two are closely tied together.

4. Complicated love: I'm not much a one for a love story, but if there is a love element to a story I'm reading, I don't want it to be obsessive, head-over-heels, fairy-tale love. One of my favorite things about the STUDY series was that Valek and Yalena loved each other in an unconditional, not to be distracted by pesky love triangles, sort of way. There is a bit of a love triangle in this story, but it's realistic and convincingly written. And complicated in a similarly realistic way. For example: When Opal sleeps with her boyfriend-who's-really-the-bad-guy-in-disguise, I love how Opal's thoughts are so layered and complicated. It's a little bit of violation, a little bit of attraction. It's disgusting but in an almost romantic way. It feels like rape and love. I don't love that it happened--I felt deeply disturbed by what I assumed was Opal's loss of virginity and the deep violation inherent with the act--but I did like how Snyder pushed her character to this point, and how well crafted the scene was, adding to the complexity of Opal's love.

Quibbles: Um...none. Originally, I was going to say that Opal's acceptance to being the bait, and her lack of an escape plan in the end was a weakness in writing, but actually, it fell right along with her character. It wasn't what Yalena would do--which I'd become a bit accustomed to--but it *was* what Opal would do, and I can't fault the character for acting in character.

The Bottom Line: A great start to a new series. If you're a fan of fantasy, buy the STUDY series and the GLASS series. You will not regret it.
Posted by Unknown at 4:48 AM

Yay another Maria fan spreading the love! Thanks for the links!

No problem! Loved the interview/guest post you did on the FNC page!

I have been looking for a new fantasy series, so I'm really excited to read about this! And the cover is made of awesome too.

Great review! I love it when authors drop hints that don't mean much at the time, but when put together near the end, blow me as a reader away. :)

Carrie--Oh, absolutely! You will love it!

Danyelle--I was actually a little afraid to include because it felt almost as if I'd missed something obvious...I thought others might look at me in disbelief, and say "You missed THAT?!" But...I felt the same way about Mad Eye Moody in the fourth Harry Potter, too....

Buy IHOME iHM79BC Rechargeable Speakers Because they contain toxins, they have to be disposed of in a certain manner. Avoid fast charging always because it will lead to over heat and also cause damage to the battery and even to the charger. The ability to measure SoC while a battery is on charge or on a load enables the estimation of battery capacity. On the other hand, the LCD, or Liquid Crystal Display, is very economical and power-saving.