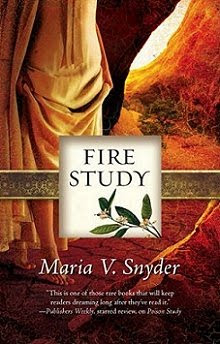 I meant to review Maria Snyder's FIRE STUDY and the first book in her new series two weeks ago, but getting sick laid me low.

Why I Bought This Book: Well, honestly, I had to, didn't I? I mean, this is the third in the trilogy--I reviewed the other two here. Maria's style of fantasy is so refreshing. It has such a wonderful mix of classic epic and innovation, of unique characters and worlds, of new magic and old.

Elsewhere on the web: My review of the first two books in the trilogy here. Author's website here (click around--she includes bonus stories if you sign up for her newsletter, and a chance to win signed copies of her book). The First Novels Club did a guest post with Maria. Also, Maria's on GoodReads (and does great posts on the GR blog).

Five sentence summary: Yalena's dealing with a lot of consequences: the consequences of revealing that her magic is dangerous to everyone around her (even the most powerful magic users), the consequences of being in love with the most-feared man in the land, the consequences of crossing paths with people willing to do things worse than death to acquire more magic. The blood-magic takes a dark twist here from the second book in the trilogy as the people lusting for power gain more control and go further to get it. Yalena's solution to dealing with these dark blood-magic users may work--but it will require the help of everyone around her, and might cost her everything she has.

NOTE: As always, highlight for spoilers.

1. Resolution: This applies mainly to those of us who want to write books with sequels. In a stand-alone, we expect the character to be resolved within that one volume. But when more books about a character are involved, it becomes essential to carry some problems into the rest of the books. You don't want three stand-alones dealing with the same character. You want a trilogy, with pieces of the story arching throughout. Maria delivers with these novels. Although the second novel felt more like a bridge between the two than I'd like, I love how Maria brought up issues from the first novel again here. For example, in the first novel, Yalena is haunted by a ghost. Although a clever plot twist, I thought it wasn't going to be much more than a plot twist. Where the ghost comes from and why Yalena is haunted is explained in the second book. Well, I thought, that's a nice little detail. In the third book, you find out even more about that ghost, and what his presence indicates in relationship with Yalena's magic.

Not only that, but all the characters in the novel, not just Yalena, have some sort of resolution. Opal, the sister to the girl attacked in the second book, is brought back for a key role. The street urchins Yalena helps in the second book have grown by this third one. Even the Commander shows up again with a stronger understand of his/her life story. By the end of the novel, we have a greater understanding not only of Yalena, but of all the people important to her life.

2. Happily ever after...with consequences: If everything ended with a smile and a bow on top, the story would be boring...and unrealistic. Let's face it: life is never perfect, even after happily ever after. In this story, there IS a happily ever after for Yalena, but the reader is well aware that her relationship with Valek, although strong and given every indication of remaining, will have difficulties. Her magic, although now somewhat accepted, is still feared--as she herself is. Her powers, now that she's accepted them, are going to cause her continued problems and hassle and unhappiness. In the end, rather than making us sad that this isn't a tied-up-neatly-perfect-happy-ending, we are satisfied that Yalena has a realistic but still intrinsically happy life.

3. Richly detailed world: One of Maria's strengths as a writer is in her world- and magic- building. Although I knew that FIRE STUDY would be followed by a new trilogy based in the same world, starting with STORM GLASS, I was still in awe of how neatly Maria tied in new details to the already-established rules of magic to include the possibilities for more stories. For example: In the second book, Opal is a minor character who works with glass with her family. In the third book, Opal's glass making ability becomes the key to Yalena's solution against the bad guys. And now, Opal's glass making is the plot of the new trilogy. That's a neat way to layer in a new series of books based on an already established world.

Quibbles: Reading this last in the trilogy made me even more aware of how much of a bridge the second book was. Ironically enough, this third book made me dislike the second one just a bit, and I wonder if the series would have been stronger had the second and third book been combined instead of separated into two different books. However, that's splitting hairs: in the end, I enjoyed the trilogy quite a bit.

The Final Word: If you find yourself a bit burnt out on Yalena's world after reading the second in the trilogy (as I was for a time), give this third book a go. It provides the perfect resolution to the series, as well as opens you up for the new series by Maria.

I am glad that you liked it. Fire Study left me with a bad taste in my mouth.

Really? Why? I thought Magic Study was a bit weak comparatively, but Fire Study made me like the series again...

I haven't read it but there's always my list :)
As always, a great review!

PJ, Snyder's writing is so addictive...if you're like me, when you read one, you'll have to read them all!

Beth, great review and I liked the areas that you pointed out afterwards. Lots of good things to remember as a writer.