The saddest (fictional) thing I've ever seen was in a cartoon. 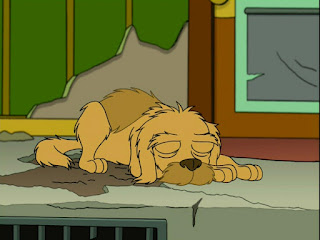 Futurama is funny and sardonic and typically makes me laugh. It's famous for catch-phrases and hilarious characters and funny one-liners, and unique characters, and well-written plot lines.

And for the saddest fictional story line in the history of ever.

"Jurassic Bark" has all the things that make up a classic episode of Futurama: there's the science fiction bits (time travel and a futuristic world), there's the funny stuff, and...

Well. There's a tragedy. That's not typical of Futurama. This is a show that's quick to poke fun of society, people, and the world in general, but it keeps the tragic on the low end.

The tragedy comes out of freaking no where. No one--well, at least not me--expected it. I was blind-sided by what happened--and by my emotional response to it. Even now, if I see this episode playing, I shut off the television and run to the other room.

Something similar happened last year when I was watching Adventure Time, my current obsession. Adventure Time is just carefree fun--there are people made of candy, there's silly plot lines, it's just pretty much hilarious fun. 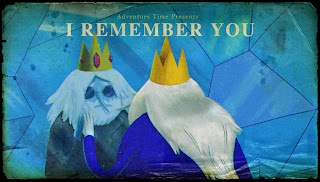 The Ice King is annoying, stupid, insipid, and just plain weird. Always the (bumbling) villain, never the hero. No one likes him--not even he likes himself.

But then there was this episode, "I Remember You." And it gave just a tiny hint of his backstory, a visceral example of why and how he became the pathetic thing he was in the show.

Seeing this episode gutted me. And it got me thinking: why was my emotional response to these two episodes so strong? Just hearing the music from "I Remember You" or the opening scene of "Jurassic Bark" makes me tear up--in shows that typically make me laugh.

And that, I realized, is the key. Futurama and Adventure Time are both really light-hearted comedies. They're cartoons for Pete's sake! Which means when I see the really, truly, tragic side of the worlds in these shows, I'm blindsided.

A tragic story can't be tragic all the time. The power behind the punches in "Jurassic Bark" and "I Remember You" comes in part because they're not expected. Light, funny, amusing stories and then bam! something tragic. That's the sort of emotional blind-siding that will last in a reader.

The same is true, by the way, of comedy. JK Rowling was particularly brilliant at this. The overall plot of the Harry Potter books is actually quite drama-filled: a boy must sacrifice himself and others in an effort to take down evil. But she liberally sprinkles the world with bursts of funny--a line of dialog there, a fun bit of magic here. And, of course, the coup de gras: 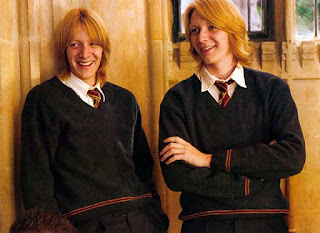 Of course there are ways to make a tragic--or comic--story in other ways. But for me, I've personally found the most meaningful, most resonating, and most emotional stories come from books where you don't expect the emotion. If you want to make a lasting impression on the reader, couch your tragic story in a comedy; put something comic within the tragedy.
Posted by Unknown at 12:00 AM