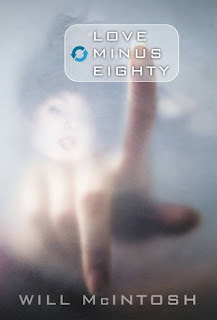 It takes a lot for a book to totally engross me the way Love Minus Eighty by Will McIntosh did.

This book has kept me reading for hours into each night. The concept itself is pretty straight-forward: in the future, if you're hot enough and female and young and...dead...you are selected for the "bridesicle" program: rather than truly dying, you're stuck into a cryogenic program where you will be revived for paid "dates" with men, and then, if one likes you enough, the man will pay for your entire revivification. In return for your life back, you become his wife. Which, in this situation, means you become his property.

But guys. This book. I just couldn't put it down.

I've spent the past ten minutes trying to put my finger on the exact thing that made this book such a great read, and I've come to the conclusion that it's not one single thing. It's all of them put together. The characters, who are each complex and unique, with realistic motivations, reactions, goals. The plot, which, while straight-forward enough, always kept me guessing. The philosophical questions raised by the program, which the author leaves to the reader to truly answer.

I particularly loved that the story is about many different characters, none of whom seem connected. Ostensibly, Love Minus Eighty is a love story. After a crushing break-up, Rob, a generally good guy, isn't paying attention while driving in the city and strikes and kills a beautiful young woman, Winter. Winter is put into the Minus Eighty bridesicle program, and Rob, wracked with guilt, works to earn enough money to visit her and apologize. What follows is the unlikeliest love story ever. Meanwhile, Veronika, a love coach, hides a crush from Nathan, her best friend, and, coincidentally, the ex-boyfriend of Winter. And then there's Lycan, the brilliant man who tried to kill himself. And Sunali, the former bridesicle stuck in a horrible family situation that includes Lorelei, a girl who's turned her life into a drama-filled money-spinner. Throughout the book, there's also Mira, the longest-frozen bride in the program. Her stories in particular seem to be disconnected from everyone else.

But in the end, much like a tapestry woven together by many seemingly unmatching threads, the author pulls all the characters together into one glorious story. Don't be afraid by the size of the cast--it's easy to keep up with, and every character plays an important role.

I think, though, that one of my favorite things about this book is the ambiguous philosophy. Will McIntosh raises some very important questions in the story, and he doesn't provide any answers--not really. The bridesicle program, for example, is horrid--the women selected for revivification are essentially slaves to the men who buy them...but the alternative is death.

But it was the implications of what love really is that has kept this book so present in my mind. I think the most lasting impression I have of the book is when Rob's father tells Rob about how his love with his wife isn't the ideal fairy-tale Rob seems to think it is...and how he's okay with that. This was something that particularly played through my mind with Veronika's character, and how she finally ends up. Love is not always the blinding passion and burning flame the songs tell us it is. Even with the example of True Love in the book, the two characters have been forced into a situation where, without it, that love might not exist, despite their compatibility together.

In the end, I guess I can only say this: this book is a combination of the best things in sci fi--an engrossing story told by fascinating characters in the future that raises questions for the reader now. It has the best bits of a Philip K. Dick novel and a Twilight Zone episode, and I couldn't put it down.

For my YA-preferring readers, this novel is classified as adult, and the language in particular may offend some readers, as well as some of the deeper contextual issues touched on. However, in terms of writing pace, style, and content, I think many YA readers will love this novel as much as I did. For general appeal, I think readers who felt like Ready Player One was a cross-over novel between adult and YA will feel the same way about Love Minus Eighty.
Posted by Unknown at 12:00 AM