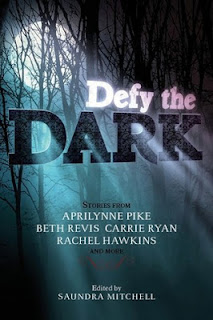 I've mentioned before how honored I was to be invited to participate in this antho, and how awesome it is to work with Saundra. But one of the things that made this antho even more spectacular was that Saundra did something I've never seen before in an anthology.

She solicited manuscripts from never-before-published author to be included in the anthology.

The contest, understandably, had more than a thousand entries--and nearly three and a half million words and Saundra read them all. And gave feedback. So when we say Saundra is awesome, we mean it.

This short story is the grand prize winner, the one published in the anthology. And, as fate would have it, it's also the story published directly after my own, which makes me feel all sorts of awesome about it.

I can absolutely see why Kate won the contest and a spot in the antho. "The Sunflower Murders" is beautifully written, a vignette about life and death and the inconsequentiality and vast importance of both. There are lines in the story that just stun me with their deftness. Lines like:


She had unspeakable things done to her that everyone spoke about anyway...


Something was ending. Like a story coming to a close and there would be no epilogue, no To Be Continued.

Beautiful, no?  Kate perfectly grasped the horror of death and placed it beside the normalcy of it, something that is no easy feat. This amazingly talented highschooler definitely has a bright future ahead of her! 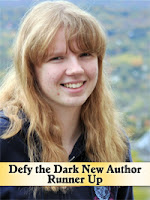 After Illume
by Emily Skrutskie
Read the full story online

Guys. Guys. It's a short story about space. You know I love that shizz! This sci fi short had me from the opening line (seriously, go read it). It starts with a serious bang--the modules of the Illume have broken apart due to a chunk of ice striking it, and the narrator is stuck inside one, with only the limited air, food, and water she has with her.

The narrator is fine with being alone--she was hired for the job because she could handle solitude in a space station--but she now faces a slow, lonely death in the dark void of space.

Or...not so alone. Because there is Samara. A voice sent from "the other side" to comfort the dying. But there's more to it than that.

Of course there is.

This story is smart. It touches on both the future and history, with a main character who's clever. And there's some whip-smart narration, too:

According to this wacky old psychology that some fart named Maslow came up with, I’m not actually allowed to need a nonessential like coffee more than human companionship, but the bastard’s wrong. 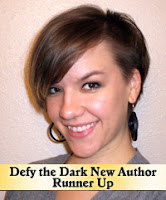 You know how some how-to-write books throw around phrases like "unique voice" and "atmosphere?" Well, this short story has both of those in spades--a totally fresh, unique voice plus a setting that's as vivid as the characters.

You'd think a story about swamp witches and were-gators and bogwater would be, well, gross, but it's not. It's a different story wrapped up in a totally different world and sprinkled liberally with flashes of brilliant lines--like this one:


The other truth is that there are worse things in the swamp besides boys who are
sometimes gators and sometimes not.

And trust me--seriously, trust me on this--you absolutely don't want to miss the ending of this one. It's quite the twist.

You can read the two runners-up stories online for free right now, and the grand-prize winner is published in the anthology, available now. But check back tomorrow, because I'll be hosting a contest so that you can win your very own copy of DEFY THE DARK--and more!
Posted by Unknown at 12:00 AM