I AM SO EXCITED ABOUT TODAY.

Because today you get to see the new cover for the paperback of ACROSS THE UNIVERSE! The cover is being revealed exclusively at the official Facebook page--and to entice you to go over and check it out, I would like to bribe you with....ICE CREAM! 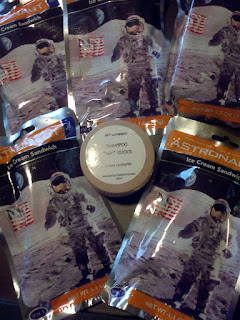 That's right...ASTRONAUT ICE CREAM!!! I've got five packs of astronaut ice cream, and I'll be sending them out to five winners. And one winner will also get a little something extra, inspired straight from ACROSS THE UNIVERSE.

When Amy first starts living on the ship Godspeed, I wanted to show how different it was. In an early scene, Amy goes to the shower, which isn't entirely like our showers:

The shampoo bar is something that exists now, not in the far-distant future. I first heard about them from the store Lush, but quickly found my way over to Etsy, where I found a fantastic seller who makes the best shampoo bars I've ever had. If you've never tried solid shampoo, it's so amazing--it cleans much better than bottled liquid shampoo.

And I'm giving away a bar to one of the winners of today's giveaway so the winner can try it out for him (or her) self! And it's scented lemon-lavender, the same scent that Amy uses!

To enter: visit the Facebook page and check out the new cover! (And let Razorbill know what you think of it!) Then fill out the form below :)

Additional contest information:
Posted by Unknown at 12:04 AM

I don't think it's up yet. Maybe because you can't set stuff to post automatically on FB, and it's 12.36 am EST. lol.

Thanks for mostly makign your contests international. :)

Grrrr the cover isn't up yet! Its going to be soon though. But I'M DYING WAITING!!!! Haha. Oh and thanks so much for the giveaway opportunity! I've always wanted to try that freeze dried ice cream stuff but my parents always thought it was just too weird. And that bar shampoo sounds AMAZING. Definitely want to buy some now! :)

Cool prizes! I love the original cover so now I'm curious to see how the paperback looks...

Oooo...ASTRONAUT ice cream. That's the key word. I was wondering how someone, even you, can give away ice cream!
I'm waiting for the cover... =)

Hey Beth! I love shampoo bars! There is a local company that has been making them for years. www.balmzara.com

My husband used to work at a store that sold astronaut ice cream. So good! I'm off to see the cover. So exciting!

Any kind of ice cream is okay with me. :) And yay for a new cover! I loved the other one(s), lol, but new covers are always exciting!

Icecream, yum! after leaving the comment I am going to check out the new cover! I love the hardcover, so I hope this one is just as pretty or prettier!

Astronaut ice cream! Very cool! I think I've had some before way back but I can't remember what it tastes like. Ha! I think I liked it :-)

Really liked the cover, but I am still in love with the original :)

The cover, astronaut ice cream & shampoo bars? Holy space monkeys, that's amazing! I'm really excited for the paperback AND this giveaway. Thanks for being so awesome! :)

I've actually tried the astronaut ice cream before, it is delicious! and it feels so good to brag about eating it. Man, now Im missing NASA's Johnson Space Center ): such a cool experience!

also: the paperback is gorgeous! I looooooove the hardcover errr cover, but I never ever thought I would like the paperback just as much! Amy looks awesome :D

I love when authors are Etsy-lovers. It always feels like my worlds are colliding. :)

I like the new paperback cover. It looks very sci-fi. I would probably like it even more if I wasn't so in love with the original cover. I don't know why they chose to mess with perfection. I think I can learn to love the new cover though.
Thanks for the giveaway.

I think I read this post right after you posted it, last night, because the new cover wasn't up yet. I love it, and the shampoo bar sounds cool. Thanks for the giveaway.

Cool cover! I miss all the stars from the hardback cover but I like the Sci-fi look of the paperback.

That's such an awesome cover! I love Across the Universe and can't wait to read a million suns XD

Another book I have to have two of, a hardback and paperback. ATU PB is beautiful Beth!
Jen

Oh my gosh, I am in love with the PB cover - I think I love it even MORE than the HC cover! Gorgeous!!!

Awesome cover. So excited for you.

The paperback cover is very beautiful!!!
Thanks for the wonderful giveaway.