My Next Contest: Squee!

OK, so if you've been following me on Twitter, you'll know that I've been hinting at a new contest coming up.

Well, this is NOT an announcement of the contest. Because, well...the prize hasn't been made yet.

BUT. You can watch it being made! YAY!

Let me backtrack. So, not too long ago, I saw a picture of a charm bracelet that was full of charms dealing with Doctor Who (that Rachel Hawkins totally snagged it before me.) It was full of awesome charms--an angel wing for the scariest of monsters (the stone angels from "Blink"), a double heart charm because the Doctor has two hearts--and some more obscure ones, like a banana from that time the Doctor accidentally invented banana daiquiris two centuries too early. You can see a full list of the charms and more details here! 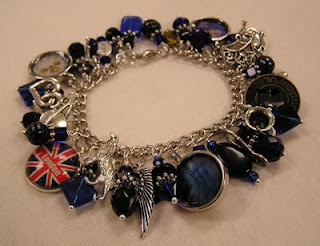 And I thought: that is brilliant. I loved the level of detail, and the way that each charm meant something so specific to the story.

And so I did some rooting around, discovered the Etsy site where the bracelet originally came from--and saw that the seller also made charm bracelets for Harry Potter and Twilight, and promptly contacted the seller in the hopes that I might be able to convince her to make a charm bracelet for ACROSS THE UNIVERSE.

And she was all game. In talking with Jennie, I discovered that not only does she have excellent taste (she's working on some FIREFLY bracelets right now, squee!) but she's totally cool.

And she's going to be blogging about the whole bracelet-making experience! So, if you'd like, check out her blog (or her Etsy store). In the meantime, you now know what one part of my next contest is going to be! (The other part will include an ARC of A MILLION SUNS and some other things I'm working on while waiting for ARCs--when I get finally some, this contest is going to be huge!)

This is sounds amazing !!! i am so excited ! and i love the etsy.com bracelets !!!!! and i can't wait to read possession !

I am so excited for this! I loved the Firefly bracelets you tweeted about earlier. They were so cool. I would die for an ACROSS THE UNIVERSE one. That's just pure awesomeness. You always have the coolest prizes! I'm still sad I didn't win one of those awesome water bottles.

I've seen her Harry Potter bracelets before and they are so detailed and geeky cool.

I'm so excited to see what she comes up with for ATU.

How exciting! I wish I'd seen that Doctor Who one, I would I've snagged that one up so quick! Hmmm...*makes plans to build a TARDIS and go back in time to get the bracelet*
I'm so excited to see what the Across the Universe bracelet will look like. It's going to be awesome, I can just tell!

Her bracelets are so cool! Can't wait to see what yours.

The bracelet sounds awesome though I'd be more excited to win an ARC of your book.

EEEEPPPP!!! This giveaway sounds like it's shaping up to be AWESOME of EPIC proportions! :D Can't wait for it...I'm dying to read A Million Suns!!!!

Those bracelets are amazing. She must have a great deal of patience to put that much detail into them. Can't wait to see how your custom ATU turns out.
Jennifer
PS I loved the potion master bracelet.

Holy crap. That looks amazing! I can't wait to see it finished!

Neat! And um, Firefly jewelry? *MUST HAVE*

I'm addicted to Etsy and I LOVE charm bracelets! This post is full of WIN! I think it's really awesome that she is doing one for your book (which I loved)! I think all authors should have jewelry that coincides with their books ;)

The bracelet is awesome, just beautiful. And, the contest has me excited to no end, can hardly wait for the results to come out -- even if I don't win.

I'm having my very 1st Book Give Away Contest on my blog (been thinking about it forEVER).

Everybody come on over and enter to win a FREE copy of my book.

WOW! That's so cool! Her website looks SO AWESOME!!! =D