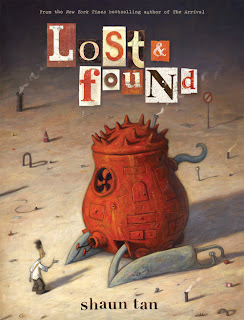 My friend Heather kept telling me about this artist and writer, Shaun Tan. And then Tan won an Oscar for his short film based on "Lost Things."

And still, I would look at his books and think, "meh." It didn't seem to be my sort of thing. It wasn't pretty. It seemed like a quiet book. I was fairly certain neither kissing nor explosions were involved.

But recently I was in Salisbury at the Literary Bookpost, and thought...I'll try it.

Within the first few pages...I was hooked. My doubt was SO unfounded.

LOST & FOUND was beautiful. Well...it was, but it wasn't. I was right in that the artwork isn't pretty. But there's a difference between "pretty" and "beautiful." Something can be ugly, but beautiful at the same time.

The stories are each different in tone. "The Red Tree" is about overcoming depression; "The Lost Thing" is about losing the nature of innocence; "The Rabbits" is about colonialism. But, of course, it's not as simple as that. None of it is. Because "The Red Tree" might be about depression, but it's also about finding yourself, about being yourself, about accepting what's wrong and what isn't. Also: it's about a red tree.

This is an illustration from "The Red Tree"--the dark fish is the disappointment, sorrow, and sadness hanging over the red-haired girl on the street. It doesn't swallow her, but it does block out the sun. And that's one of the most important things in this book--that the text and pictures are indelibly intertwined.

But if you look closely--and I mean closely--you'll see a red leaf. And the red leaves add up to a red tree.

So: check this book out! And check out Shaun Tan's other works, too--I know I will be!

Check out the other Bookanista Reviews!

Tan's "The Arrival" has such beautifully mind-blowing storytelling; if Magritte and Escher created a graphic novel about the immigrant experience, it might be something like "The Arrival."

those are some serious pictures. really neat!

I loved the art work! It's what caused me to move from my google reader over to your blog to comment. This is such a cool book and with my birthday around the corner I now know what to ask for!

"I was fairly certain neither kissing nor explosions were involved."

LOL! That so perfectly sums up why I have't tried this book yet. You've piqued my interest.

I'm totally intrigued by this one. And I love the artwork too!

Love those illustrations. So interesting.

This is a PB? It looks incredible!

What an innovative sort of book. This is definitely the kind of thing I like to stumble across. Sounds right up my alley. Thanks for the recommendation, Beth.

They're the best, aren't they?

"Something can be ugly, but beautiful at the same time" is such the perfect way to put it.

I took the kids to the animation festival in Santa Barbara a few weeks ago and The Lost Thing was one of the films featured. It was very cool, but I didn't realize it was a book, too. I'll have to look for it. Thanks!