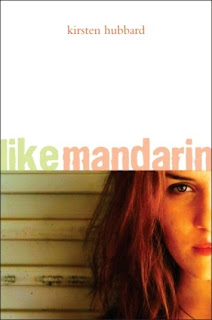 Today, we're celebrating the book birthday of LIKE MANDARIN by Kirsten Hubbard!
First, a little bit about the book:
LIKE MANDARIN is about a girl in a small western town, who wants a lot of things, but mostly, she wants to be like Mandarin, the rebellious, beautiful, untouchable girl of the town. The story's about friendship, love (of all kinds, but especially platonic and familial), bonds (to our families, whether we like it or not, to our friends, to our past, to where we're from, to who we are, whether we want to be that way or not). It's beautifully written, and just the sort of book that fans of contemporary YA such as John Green (PAPER TOWNS) or Kody Keplinger (THE DUFF) would love.
You can also enter to win a copy of the book here! Go now!
But today I'm not just going to tell you about this book. I'm also a part of the blog tour welcoming LIKE MANDARIN into the world, and so, without further ado...
In Like Mandarin, 14-year-old Grace Carpenter would give anything to be like Mandarin Ramey. Mandarin is seventeen, self-assured, irreverent and mysterious; the notorious wild girl of their small Wyoming town.
From Grace:
Sure, maybe most of the attention Mandarin got was negative. But it wasn't the kind of disdainful brainfreak attention I got, when I got any at all. Hers was lust. And jealousy. Because even as they condemned her, every single girl wanted to be her.
But nobody more than me.
I want to be beautiful like you, I thought, as if Mandarin were listening.
I want apricot skin and Pocahontas hair and eyes the color of tea. I want to be confident and detached and effortlessly sensual, and if promiscuity is part of the package, I will gladly follow your lead. All I know is I'm so tired of being inside my body.
I would give anything to be like Mandarin.
Grace's fascination with Mandarin borders on obsession. When they're paired together for a project, their explosive friendship rocks Grace's world – which makes Mandarin's betrayal even more devastating.
Was there somebody you would have given anything to be like when you were a teenager?

And here's where I'm going to get a bit embarrassing...and I hope not too creepy. Because, honestly? If I could have been like anyone when I was a teenager, I would have wanted to be like Kirsten.
I didn't know it at the time, of course, because I didn't know who Kirsten was then. But in a lot of ways, I was like Grace (minus the beauty pageant background). I wasn't that confident in myself, and the only way I really defined my life was by what I wasn't. And what I wanted. And what I wanted, more than anything, was to travel fearlessly.
Now I have traveled rather a lot in my life--but I've not traveled like Kirsten. I mean, check out her bio!

Kirsten Hubbard has hiked ancient ruins in Cambodia, dived with wild dolphins in Belize (one totally looked her in the eye), slept in a Slovenian jail cell, and navigated the Wyoming badlands (without a compass) in search of transcendent backdrops for her novels.

And don't forget the adventure she had in Belize that she wrote about for my Across the World tour (read more here). She says the sinkhole had mermaids and dude. I believe her. Because Kirsten's cool enough to know where the mermaids really are.
So, as cheesy as it sounds...the person I most wanted to be like when I was a teen (and today!) is Kirsten: an author, a fearless traveler who throws herself into adventure.
*sigh* I guess I'm just going to sit here in my coffee shop in my boring sweater and dream about being like Kirsten some more...
Want to find out what the other Bookanistas are raving about today?
Posted by Unknown at 4:13 AM

I've got this on my TBR list already. I'm looking forward to devouring it.

Awesome review. I can't wait for this book!

So looking forward to this book! Also, that was totally the person I wanted to be when I got older, too. Well, still is. :D

As a teen, I really wanted to be like another girl who was my age. It's not just because she was uber talented: played 3 instruments, sang, danced, but because she was so confident and poised. Compared to her, I felt like a babbling idiot with bad posture and inappropriate giggly bouts with nothing interesting to offer.

I am glad I stayed me, though. Confidence does come. In different doses and on different schedules. I wouldn't give up my experiences for anything. Painful, sorrowful, but they are my pain, my sorrow.

Thanks for the recommendation! I've heard a lot about this book.

When I was growing up, I wanted to be like Indiana Jones, only the female version, digging up old civilizations in Crete...

I guess there's still time for that. ;)

I love this, Beth! Such a honesty, and so sweet. I would love to be like Kirsten now, to be honest. But also like you, too. I feel so inspired by both of you. I want to travel the world, too, but I also want to feel confident and write what I want to write and find a way to succeed doing it--just like you.

Oh how I'm looking forward to reading this book! And boy am I envious of all of Kirsten's AMAZING adventures!

Thanks for the review! This book sounds wonderful. Can't wait to get my hands on a copy!

I think getting to travel like Kirsten sounds pretty cool too. I'm excited to read this book.

Oh this book sounds great. I can't wait to read it.

Great review. I've heard such great things about this book. And yes, Kirsten has had a super interesting life.

I definitely was not the person I wanted to be as a teen. I was overweight, shy, had few friends and went through so many growing pains it wasn't funny.

Love this post! I'm so excited to read this book!!! And I'd definitely love to be more like Kirsten; I'm a young writer who adores traveling...so naturally I kind of want her life. :]

I'm getting really excited for this book. Great post!

Ha! I guess I'll add to the creepy stalker list ~ I'd love to be Kirsten too. That is one bio to be way jealous about ;)

Aww, Kirsten is kind of amazing, isn't she? Traveling all over sounds so fun and I hope to get the chance to see just as much as Kirsten.

I really wish I could travel more, too!