I didn't want this to get lost in the shuffle tomorrow--I'm going to be announcing a pretty big bit of awesome on the blog tomorrow, and I wanted to be sure that everyone had a chance to read Ruta's last post and not ignore it with the overlap of posts tomorrow. So I'm going to post Ruta's words of advice on writing now--remember, comment on this and the other four posts for a chance to win a big prize pack! Winner will be announced after Friday. And come back tomorrow for the huge awesome game/contest/amazing thing that's going to be posted! 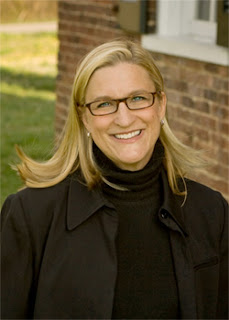 To wrap up this week on BETWEEN SHADES OF GRAY, I ask Ruta to tell us a little bit about her writing process. Here's her words of wisdom:
Well, I wouldn’t call it a “process.” It’s more stream of consciousness. Unfortunately, I don’t have large blocks of time to sit and write. I snatch bits and pieces of time whenever I can which often means in traffic, on planes, or very early in the morning. I always carry pen and paper with me.
I don’t have the luxury of waiting for inspiration to strike. I may only have fifteen minutes on a particular day so I have to jump right in. I plow forward, even if what I’m writing is complete junk. I try to tap into a vein of emotion in the scene and as soon as I do, I’m locked in and off to the races.
I often write dialogue longhand. I’ll visualize a scene in my mind (as if I’m watching a movie) and the characters will just start talking. I recently wrote two chapters of my latest book sitting on the edge of a hotel bathtub, scribbling on notepaper. Sometimes, while on long drives, I’ll write by recording myself speaking narrative and dialogue into a voice recorder. So essentially, I just let it flow, whatever comes to mind. I’m a big reviser. In fact, maybe I’m more of a reviser than a writer! 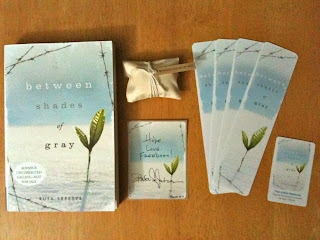 Between Shades of Gray Prize Pack:
Signed ARC of BETWEEN SHADES OF GRAY
Signed bookplate
Bookmarks
Music download card
All this week, I'll be posting about BETWEEN SHADES OF GRAY. Comment on a post, you get an entry for the random drawing. Five posts = five chances to comment and win. So come back every day this week for another chance to comment and win! Also, I thought it might be easier if I suggested some topics for comments--you don't have to comment on the following questions to enter (a simple "please enter me!" is fine), I just thought it might be fun to get a real discussion going.Question 1: Writers, what's your process like?

Question 2: Readers, are there any remaining questions you wished Ruta had addressed?
Posted by Unknown at 3:11 PM

I'm a pantser--I have an idea and a general outline, but a lot of the details are filled in as I go along.

The only question I have is about the cover. What did she think when she first saw it and how much influence did she have?
The snow, the barb-wire, and the new growth is a powerful analogy for the subject of the book.

I also want to thank both of you for an interesting week of posts.

My process actually sounds quite similar to hers. I'm a snippet writer. As dialogue and scenes come to me, I'll write them out longhand in a notebook, but I don't put them into my actual manuscript until I reach the part because if I wrote all the good stuff then tried to tie it together at the end, it would never happen.

In my younger years, I wrote longhand then typed laboriously on a typewriter. Then, computers were invented. Yay! Now I find it difficult to compose in longhand. If I weren't a stay at home caregiver and lived on the run, I'd do more pen and paper. But I have blocks of time to write, and the computer is so much faster and easier.

I just got my book cover, too, from my publisher, so I wonder how Ruta reacted when she saw hers. I felt a bit spooky seeing my name and some early pictures of me and my family "up in lights."

I write my rough outline longhand and then everything else is typed on the computer. It's a slow, meticulous process.

I always write longhand. I find the computer stifling, and I can feel "it" more when it's just flowing out.
I'm interested in how she can keep up with all the details, writing through all those different mediums.

Thanks for all the awesome posts this week! This is such a great give away.

My process is very much like Ruta's, including the writing longhand. And I'm not saying that because she is one of my new favorite people.

That's pretty interesting that so many people still write longhand first before typing things on a computer-- I thought I was the only one that gets writer's block in front of a computer screen, but good to know a lot of us are still writing the good, old-fashioned way!

I'm so ready to read her book.

I like to write things out longhand, but that takes me forever so sometimes I don't. My ideal is to write longhand, type into the computer and revise, print it out and revise some more, then keep writing. Here lately I've been typing directly into my Word Document, and that's fine, but it feels kinda weird...

I love hearing about other writers' processes because it helps me conquer mental, perfectionistic blocks I set on myself. I love outlining, but with my current WIP, I have only a vague idea of what I want to happen. So hearing about people who just start writing to "see what their characters do" really helped me to keep going on this one.

Thanks for sharing how to write on the run. That's how I often need to write to get anything done. It's great to know that's an okay way to be productive.

My process is generally planning in detail, then scrapping it all about a chapter in and pantsing. I'm in denial, I think.
I would like to ask the author: I'm thinking that it probably brought your family closer together, but if it did, in what ways?

Oh, gosh, I always seem to come up with ideas while in the bathroom. It's great to see her process.

My process changes up with each book. I'm writing two right now, one that NEEDS absolute silence and another that *needs* a playlist. It's all weird for me.

Sign me up!!! I love giveaways by amazing authors=)

Enter me in the contest! I totally want this book!

My first draft is fun. Horrible, but fun. After that it's all work. This is a great post.

Wow, that must require amazing amounts of dedication, to get into the story at such short notice. It always takes me so long to get into whatever I'm writing, so vexing.

And while the book sounds scary, (I don't deal so well with dark things, particularly historical,) it also sounds amazing. I'll try and muster up the courage to read it.

Please enter me!!
Does she have a work in progress?

My writing process would be, Me getting ideas writing them down and then filling the details as I go along, but then I get writers block a lot.
My question why did she leave the book where it shows the letter and doesn't explain how Lina and I can't remember the life of me the boys name gets reunited? It left me hanging!!

I'm a (mindblankontheoppositetoapantser). Yeah, that. (: Actually, I think when it comes to my plots and writing-related such and such, I'm, well...Let's just say that would be the most organised aspect of my entire life. Seriously.

It may stem more from my procrastinating tendencies, but I've got folders filled with plot lines and character arcs and snippets of quotes and every sodding tidbit. On the wall above my desk, I've actually got strips of wrapping paper reversed, with Sharpie scribble outlining each plot in bullet points, with post-its on top. I know exactly where I'm going. But when I write, I just go. I barrel through and then take forever going around and around the revision tree.

I always want to know if music influences an author and do they listen to it while writing.

I can't wait to read this book! Thanks for the giveaway!

I like the idea of recording the dialogue and then writing it down later... I am not a writer myself, but I often think about writing because I enjoy reading so much. I am not sure how well it would work out for me, but it might be something I try some day. I am usually willing to give something a try at least once. :)

When I write, I like to put down ideas on paper to get the juices flowing. Once I know the general direction I'm going toward, that is when I sit in front of the keyboard and type like a mad woman.
When I read a deeply moving or tragic book I always wonder if the characters haunt the author after the book is finished and printed.

I don't write regularly or seriously right ow, but I do utilize a recorder since I drive around a lot. It is very handy to catch my thoughts when I'm on the road.

Thank you Ruta for sharing so much about yourself and Between Shades of Gray. And thank you Beth for bringing it to us :)

when i get an idea i just start writing. When I do the outline it just sort of stops my creativity.

Please Enter Me In This Great Giveaway :D Thanks!

As a writer, I tend to have the same problem that I need to write an idea as it pops into my head. As I've shared with a lot of fellow-writers, I would sometimes end up writing on my arms and legs, if I couldn't find paper (which is usually when an idea would spring into my head) and ruin my clothes with the ink, and everything - which is why I use the recorder on my phone to record the dialogue/ideas that spring into my head now.

As a reader, I wanted to ask her - Was there ever a book that truly touched her heart, and in some ways, influenced the book that she has written? :)

Thank you for this amazing giveaway opportunity - but even more for allowing us a glimpse into the world of "Shades of Grey".

Thank you so much for hosting this amazing giveaway!

I always think of ideas late at night in bed, and before I know it, it's 5am! Not good :)