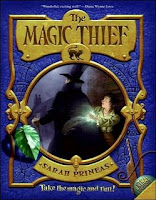 What can I say? The short version of this review is: I loved it. No...I love it. This is the kind of book I strive to write: simply beautiful, with a clever plot and cleverer characters and, at it's heart: true.

This book is one that I was hesitant to pick up. I thought the cover looked a little childish, and I was uncertain that this book with wizards and orphans would stand out from the crowd.

Boy was I wrong. Wrong, wrong, wrong. This book has an inventive of a plot as the book it will inevitably be compared to: Harry Potter. But don't get tripped up by the wizards and orphans: this book is unique and different from nearly every one on the market.

And don't forget, be sure to check out my interview with Sarah Prineas if you've not already.

Are you interested yet? Keep reading for a chance to win your own copy!!

Five sentence summary: Conn's living on the streets as a thief after being orphaned. Then he steals from a wizard--and when what he steals doesn't kill him, the wizard takes him on as an apprentice. Conn's skills as a thief (as well as some natural magic tendencies) aid him on his quest for a magical stone that will hone his abilities. And he's going to need those abilities--he and the wizard are on the path to finding whoever it is that's stealing magic from the land, even if the thief is much closer to home than Conn would like.

[as always, highlight for spoilers]

1. Voice. If any book shows voice as well as this one does, I don't know it. Conn jumps off the page at every turn. As a narrator, his voice is infectious. The story is clearly interpreted through his narrative filter, and that enriches the story even more. If you need more evidence, consider this: when I finished reading, I found myself using Conn's terms of phrase. I've actually had to eliminate phrases such as "clear as clear" from my own novel because his voice bled into my own!

2. Intrigue your audience. Sarah added a code to the wizard Nevery's coorespondence. If there's one thing I know, it's that kids love codes. And even better: when Sarah signs copies of her book, she adds code! (Do you want a signed copy for yourself? You can get them here.) The addition of the code was engaging, and certainly added a new layer of entertainment to the story itself.

But--and this is important--it wasn't integral to the story. You can read the whole book without the code. Unlike Eoin Colfer's Artemis Fowl, which had an implied pressure to crack the code and read it, the code in this novel is just a small aside scattered sparingly throughout the book, like easter eggs in a movie. It encouraged--but did not require--you to go deeper into the novel.

3. New perspectives. When I first saw that Conn's chapters were separated by letters and journal entries by Nevery, I wasn't sure that it would work. Actually, I felt pretty indifferent to them throughout...until Nevery started to doubt Conn at the end. That was the point where seeing Nevery's side made the whole story a bit more tragic and poignant. I don't think this would work with every novel--but it absolutely worked in this novel. It not only broke up Conn's strong voice, but added dimension to the story. Furthermore, it prevented the "As you know, Bob Conn," dialog.

Quibbles: Very few. As I mentioned above, I'm not a big fan of the cover--it makes the book feel a bit too juvenile for me (but considering it's a book for juveniles, maybe my opinion shouldn't count on that one). My only other quibble...I felt that the revelation of the bad guy/evil plot was a littl obvious. Not to the point where it wasn't enjoyable, but I did guess the ending.

ANNOUNCEMENT: So, now that you know all about the book, don't ya want a copy? OK! After I bought a signed copy from here, I found myself with a spare first edition hard cover of the book. What to do? Give it to you! If you'd like to get my spare copy of the book, just comment here with what recent MG or YA fantasy you're most excited about reading or that you most want to read right now. If you commented on the original interview that I posted (and linked to above), then you get an extra entry!

If I had a brain in working condition, I would answer. Hmm, Ivy and I have read Fairest, by Gail Carson Levine. Does it count? Have you read it?

This looks like a great book! The last YA fantasy book I've read was The Magician by Michael Scott. I'm definitely looking forward to his third book, The Sorceress.

The last YA fantasy I read was Bewitching Season by Marissa Doyle - a nice fun book. The one I'm really looking forward to reading is The Navel of The World by PJ Hoover. Can't wait to get my hands on a copy of that.

The YA fantasy I most want to read right now is Silver Phoenix by Cindy Pon. I'd still love to win a copy of The Magic Thief, though, because I also like to write and read middle grade fiction.

I'm pretty excited about The Navel of the World too. But after reading your review of The Magic Thief, I'm definitely planning to buy a copy of that on my next trip to Barnes and Noble.

Oh yeah, I have an award for you over at my blog. Your blog is so awesomely awesome, Beth!! :)

ohhh! i haven't read this yet. I need to put it on my TBR list. Sounds right up my alley!

This has been sitting here in my TBR pile since it came out. Must read!

Hi Beth, I found you through Robyn's blog. I write middle-grade historical fiction and I've just started the submission/search for an agent process. My favorite middle grade book (for the moment, I have many favorites) is Chains by Laurie H. Anderson. I couldn't put it down. And my children are counting down the days until summer break too!

The Magic Thief sounds great! I just discovered The True Meaning of Smekday (Adam Rex) on the shelf and am psyched to read it. Was hoping it'd be available in E, but so far no joy.

I'm really excited about getting to Wings! It's been a while since I read a faerie book, and all the buzz around this one leads me to believe it's really good! Hope so!

I've been putting this book off because the cover doesn't appeal to me (isn't that awful) and I haven't heard much about it. But NOW. Now I must read it, so I thank you for that, Beth.

I finally read Howl's Moving Castle recently and LOVED it. I'm really looking forward to The Navel of the World by PJ!

Aw, thanks, Chris and Trisha and Casey! It's nice to know someone cares!

I'm excited about Once Dead, Twice Shy by Kim Harrison.

I'm sold ... it sounds great! And, I think my nieces would enjoy it too! I'm looking forward to many ... including 'Navel of the World' and 'Change Up'!!!

I really want to read Uglies by Scott Westefelt. I know it's been out, but i haven't read it yet!

I really, really want to read Beth Fantaskey's Jessica's Guide to Dating on the Dark Side!

Commented on the interview.

Fire by Kristin Cashore. But right now am rereading Trickster's Queen by Tammy Pierce (yeah, I know, you McKinley purist).

Sounds like a good book to enter to win, so I'll throw my name in the hat. As for YA fantasy novels I've read or want to read, I just finished "Starfinder" by John Marco recently--very entertaining start to a trilogy. This summer, I have the second "Harry Potter" novel on my radar.

I really want to read Son of a Witch by Gregory Maguire.

I have the book Wicked by Gregory Maguire that is sitting on my night table... and it looks so appealing! I definitely need to read it!

I have to say my son has gotten me interested in the Artemis Fowl series!

I'm looking forward to Michael Scott's The Sorceress because I just read the first two in the Nicholas Flamel series. :)

Reposted the contest at yacontests.blogspot.com

Thanks!
neohippy10 [at] hotmail [dot] com

I am currently reading Wicked by Maguire and I love it!

The book sounds wonderful. I want to read the rest of the Harry Potter series. I stopped after book five because I wanted to be able to see the movies before I read the books instead of the other way around. I wanted a different experience. Thanks for the giveaway!

the last harry potter book, i know i'm behind but i go thru stages with potter or maybe just putting it off cuz it's the last
pksanddancer(at)yahoo(dot)com

I heard Wings was good so I want to read it next.

I really liked all the Harry Potter books and I'm really looking forward to reading Wings and Hunger Games (I know I'm behind and I need to read it before the next one comes out) :-)

Thanks!
gaby317nyc AT gmail DOT com

I want to read the Dark Powers series!
Thanks
Sarah
believedreamcourage (at) gmail.com

In my old comment I forgot to write about a fantasy book I wanted so I had to delete it. I would love to read Wings. I'm excited about getting my hands on it :)

I still haven't read the whole twilight series yet! I'm behind :(

[sorry i didnt know that you could typ your name in]