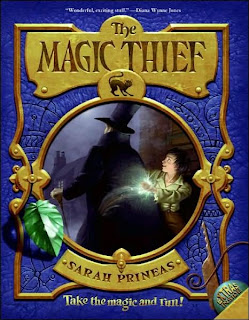 Sarah Prineas is a sweetheart. When I asked her for an interview last month, she mentioned that her book, The Magic Thief was going to be released as a paperback in mid-April, and could I post the interview then. I agreed--of course--and I thought I'd scheduled the interview to post automatically on April 18th. But...it didn't. Yesterday I thought of something in this interview, and went looking for it, and realized it never posted. I'm so sorry, Sarah! Here it is--a bit late, but here nevertheless!

I'll be posting a review of The Magic Thief next week--but I will say this: it's my favorite MG read so far this year. is the book that capture the magic--both of fantasy and of writing--that will leave its readers in awe. Do yourself a favor: read this book.

We can all read about your bio from the back of your book or your FAQ online. So, what's a completely random fact about you that most people don't know?
This isn't that random because it is writing related, but I absolutely love to write. It's just about my favorite thing to do.

As a child, what was your favorite book? Have your tastes changed since growing up?
A Wrinkle in Time by Madeleine L'Engle was my favorite. I also read and re-read T.H. White's The Once and Future King. Back then there wasn't a whole lot of fantasy available for kids, and I would have read more of it if I could. Now I read a lot of MG and YA fantasy and I must still be about 12 years old, because I love it just as much as I did then.
As a child, what did you want to be when you grew up?
Kid readers often ask me this question, and my answer is that I never really thought about it; I was too busy being a kid to think that far ahead. I certainly didn't plan on becoming a writer!

YOUR BOOK
How much of you is in your book? Is there a character like you? Is a situation in the book derived from real life?
There's a little of me in both Conn and Nevery. Like Conn, I love biscuits and bacon, and I'm rather ruthlessly pragmatic in the same way he is. Like Nevery, I like a good cup of tea and I'm even more impatient than he is. None of the situations in the book are derived from real life.

What was your timeline for the book? How long did it take to write, revise, submit, and finally, get published? How did you feel at these stages?
Here's a blog entry about that: http://sarah-prineas.livejournal.com/19958.html. Pretty much during the whole process I felt hopeful that things were going to work out. I was incredibly lucky that they did.

If your reader could only take away one emotion, theme, or idea from the book, what would you want that to be?
Just one? Yikes! Let's see. I guess the very Tolkienish idea that one person can make a difference in the world.

What are your goals as an author? Where do you want to see yourself as a writer in 5, 10, 15 years?
It took a long time, but I think I've mastered the novel form; that is, I feel confident in my ability to construct a readable novel and meet whatever due dates I've been given. My goals are to go on from that, to become a better writer, specifically in the area of plot. I'd like to stretch myself with every book. I'd like to write a book that isn't fantasy and I'd like to try a YA book.

What's the most surprising thing you've learned since becoming a writer?
That kid readers are the BEST. I hadn't planned on becoming a writer (I had a fulfilling career before writing), and I definitely didn't plan on writing for kids, but I love it, and it's mainly because of the kid readers.

Beyond the typical—never give up, believe in yourself—what would be the single best advice you'd like to give to an aspiring author?
Write it, send it off, and then start writing the next book.

Also Never Surrender, but that probably counts as "never give up".
What do you consider to be your strongest talent in writing? Your weakest?
Oh, my weakest is plot. One of the reasons I write fantasy is because it has an inherent plot structure, individuals striving to overcome the bad things in the world. I try to tweak that a bit ("is the evil truly evil? And is its defeat truly a victory?") but I have a hard time with it anyway. My strength is that I'm very observant and I have a knack for evoking a scene using specific, telling details. I didn't realize that I had that strength until reading reviews of Magic Thief that said the setting had depth and authenticity.

What's a writing pet peeve that you have?
I try very, very hard to never begin a sentence with "It was" or "There were" because these are empty pronouns and weak verbs. Actually, that's a peeve that sets me off when I read others' work. If I see it, I think, "lazy writing!"

THANK YOU SARAH, for agreeing to let me interview you! Come back next week for a book review of The Magic Thief!
Posted by Unknown at 8:20 AM

Nice! Can't wait to read the review, too!

yay for Sarah! The Magic Thief is such a pretty book, too!

Nice interview. I can't wait for your review of "The Magic Thief".

Thanks, Beth and Sarah!

Beth, these are really great questions, and the answers are interesting because of it! I loved that you asked what Sarah thought were her weaknesses and strengths! That always fascinates me. I love that a strong writer is humble enough and open enough to admit to what she has to work on. It gives me hope that I can make something good even if writing doesn't come naturally to me.

I can't wait to pick up my copy of this book. It's on my list. Thanks Beth and Sarah!

I love the cover of the book (I know that makes me sound superficial- but I do judge books by their covers). Sarah sounds very cool...I will definitely be checking out her book now.

I love Wrinkle in Time!!! Charles is awesome!