My interview for the Pay it Forward week is online now at Elana Johnson's blog. Read it to see my book's plot summed up in a tweet! 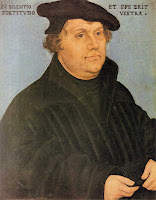 Edited to add: Several people have asked me to add a little more about one of the questions in the interview--namely, the question of who I'd most like to meet. I chose Martin Luther, and people would like a little more of a reason why.

Martin Luther is someone I've been aware of most of my life, since I'm a Lutheran and was raised as such. But more than that, I'm just hugely impressed with the courage it took to question things. That's what I most love about him. He was raised a Catholic in a world where being anything but Catholic was not just considered wrong, it was considered wrong-and-they-could-kill-you-for-it. But despite being raised in the status quo, so to say, he was able to question that world. He used his eyes and mind and heart to come up with his own opinion, and once he developed his own set of beliefs, he struggled--at risk of his own life--to stand up for his beliefs. That's what I love about him. As a young girl, I will never forget about learning of the Diet of Worms and hearing the words attributed to him: "Here I stand." That's been the way I've modeled my life: determine on my own what I myself believe, and never back down from it.


Now, there are some things I *don't* like about Luther, namely his anti-antisemitism and the way he recanted his translation of the Bible at his death. That's one reason why I'd want to *meet* him (as opposed to unilaterally saying he's my hero) because I'd love to be able to discuss--and hopefully dissuade him from--these ideas.
Posted by Unknown at 8:25 AM

Great inteview! You offered some good ideas to chew on.

HI BETH from a new follower. FAB interview at Elanas - just popped over. I noticed that several people apart from myself had their curiosity aroused when you talked about M. Luther as being the person you'd most like to meet. Maybe here you could tell us why? I'm intrigued.
Thanks!

New follower, coming to you from Elana's blog! I look forward to reading more of your posts. I found this one about Martin Luther really interesting!

I must look up why it's called the "Diet of Worms". That always makes me think of, well, a can of worms. :|

Now that's what I call an enlightening answer. I find that from these detailed answers you really get to know what makes a person 'tick'.
I'm also impressed with the speed you answered your (new) and steady fans. Now THAT'S professionalism.
I'm really looking forward to following you.
THANKS BETH!

Great answer Beth! I so enjoyed reading this interview and learning more about you. Can't WAIT for your book to come out!

Yes, ML was a most interesting man who took great risks to lead people out of darkness.

Great interview over at Elana's and I really enjoyed your post on Martin Luther. That's what I call a thoughtful answer!

I can so relate to your answer. I remember seeing the movie Ghandi and found him so inspiring for similar reasons.

Thanks for answering my question from the link.