Everyone has a different path to publication. This week, I'm featuring authors on the way: authors who have found their agents or their publishers and are in the homestretch towards reaching their dreams. Their stories are each different--but they are all inspiring. By showing you how THEY did it, I hope you remember that YOU can, too!
So, stick around all week to find out about lots of up-and-coming authors! Today, I'm featuring Miriam Foster, author of 2010 novel THE FLUTE AND THE DAGGER, as well as the awesomely-titled blog "Dancing with Dragons is Hard on Your Shoes." 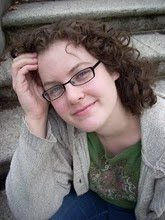 Tell us about your book.
The Flute and the Dagger, Oaktara Publishers, Summer 2010 (hopefully)

Lissandra Adney, the daughter of a lord, is flung from her
home in medieval England to Hope, a magical refugee world fraying at the seams. Lissandra might be able to help, but first she has to survive earthquakes, assassins and a queen who can manipulate your dreams and claim your soul...

Can you tell us a little bit about your road to publication?
I started identifying myself as a writer in high school, and played with it off and on for a few years after I graduated. Then somewhere along the way, I started to commit. I took classes from the Institute of Children's Literature, finished and revised my first novel. (Ruined it with revision, really. But that's another story.)  But I kept trying to learn. I wrote another book, and took what I learned from that one back to the first novel and put it back together.
Around that time, a family friend told me he'd sold a book to Oaktara Publishers, an inspirational small press. He suggested I send the repaired first book to them. I balked at first, because I don't really think of myself as an inspirational author. But my book was clean, and set in a monotheistic world, and I still liked it too much to stick it in a desk drawer. So I sent it in. And they accepted it.

But it didn't turn out to be that easy. A few months after I signed the contract, Oaktara was forced to change their name. This meant they had to re-release ALL of their backlist under the new name, changing covers, marketing materials, everything. So I entered publishing limbo, a state I'm still not completely out of. Even though Oaktara is releasing new books again, my release date for this year is still fluid. So it's been an exercise in patience, and letting go. Mostly I keep sane by writing more books. :)

Was there ever a time you felt like giving up? Why didn't you?
Lots and lots of times. The whole publishing-limbo thing was a big one, but it wasn't the only time. Every time I realize how much there is still to learn, I feel like giving up. I'm trying to find representation for my next book, and that process is fraught with disappointment. When revisions aren't working, when a first draft just won't come. When I read about a writer who's gotten huge success with their first novel, or when I enter a contest and don't even make honorable mention. All those things make me want to quit, and to be honest, I don't expect the feeling will ever completely go away.
Mostly I don't give up because I'm super-stubborn. According to my husband, I'm the original immovable object, and if you tell me something can't be done, the first thing I do is try to figure out how to make it happen. I've come to terms with the fact that I can't control much of this writer business. But as long as there's something I can do, whether it's writing consistently or finding beta readers or just being willing to send stuff out, I'll do it. As long as I can see myself improving, making progress, I can't give up.

Thank you, Miriam! You can find Miriam online at her blog.


This week of interviews is being hosted by Elana Johnson, and several other bloggers are jumping on the bandwagon, including:
Be sure to check them all out for inspiring, first-hand stories of authors on the verge of publication!
Posted by Unknown at 7:16 AM

Nice interview. I look forward to reading about the various journeys

Ooooh. I predict that my to-read list is going to get a lot longer this week! This one sounds right up my alley. THANKS for the awesome interview, you two!

Great Interview! What a fun week.

Like Carrie, I'm looking forward to Miriam's book coming out. It sounds great!

Thanks for this interview. Good luck Miriam!

These have been great! Thank you for the wonderful interview!

This is such a great idea.

Best line:
A queen who can manipulate your dreams and claim your soul...

I'm passing this link to one of my followers who's a writer and a flutist.

Wonderful interview and inspirational to an unpublished writer. Thanks

I love success stories - thanks Beth!

Oh man, there's nothing like living in limbo. It's not fun not matter what stage of life you're in--especially publishing. Great interview!

Fabulous interview! The Flute and the Dagger sounds so intriguing!

What an inspiration you are! I think this whole writing business requires more patience than I'll ever have...can't wait to read this one! Thanks for the interview!

The Flute and the Dagger sounds like a fantastic read -- can't wait to see it on the shelves.

Wow. I'm overwhelmed with all the kind comments here!

Thank you everyone for your encouragement and well wishes. One of the upsides to being in limbo is all the time I've had to get to know the awesome online kidlit community.

You are all welcome in my corner of the web anytime!

In this business stubborn is a great thing. Wonderful interview, thanks!

Hi Miriam, First, best wishes on your book's summer release, very exciting times going on! And I like your attitude, that as long as there's something you can do, and are moving forward in some way, you won't give up. What a great outlook to have, that any measure of progress is progress, taking us to where we want to be.

Great interview - thanks! Miriam, I hope all that "limbo" doesn't affect your release date. Good luck with your book! It sounds awesome. :D

Great idea Beth to interview other authors. Miriam, I can't wait to read your book. I just came upon your blog a few weeks ago. I agree it's hard sometimes to keep plodding along. It helps to know we're not alone.

cant wiat to read everything this week!

. I look forward to reading about the various journeys
data entry india

I'm really hoping that my own stubborness will pay off ;)

The Flute and the Dagger sounds fantastic! I love fantasy stories where characters are removed from their normal worlds, but this one sounds especially fun because she's coming from medieval times. Count me in.

Glad you're too stubborn to give up, Miriam! Good luck with your release date. :)