Everyone has a different path to publication. This week, I'm featuring authors on the way: authors who have found their agents or their publishers and are in the homestretch towards reaching their dreams. Their stories are each different--but they are all inspiring. By showing you how THEY did it, I hope you remember that YOU can, too!
So, stick around all week to find out about lots of up-and-coming authors! Today, I'm featuring Shannon Morgan, author of BRIAR-BOUND, represented by Chris Richman of Upstart Crow, and blogger at Daily Pie. 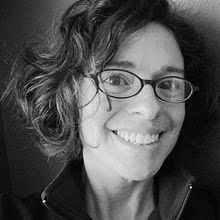 Tell us about your book.
To find answers about his missing father, and armed with only an ancient book of tales and a cryptic note from his mentor, twelve-year-old Jack enters an enchanted forest he knows he can never leave again. In that wood lives ten-year-old Stump, whose elderly guardian hides a ring that holds clues to the girl's true parentage. To bargain for the ring, she lures into the forest a boy who resembles the old woman's long-lost son: Jack's five-year-old brother Peter. BRIAR-BOUND is a middle grade fantasy, represented by Chris Richman of Upstart Crow Literary and currently on submission to publishers.

Can you tell us a little bit about your road to publication?

1987: My PSAT suggests I become an actuary. Here's what an actuary does. Riveting.
1988 - 2006: I get a degree in history, then work many, many different jobs, carefully avoiding the shiny but deadly lure of actuarial science. Exactly like Luke and the Dark Side. During this time, I begin writing... grant proposals and standardized assessments. (OK, so I totally dabbled in the Dark Side.)
2006: My favorite TV show ends in a crazy-good cliffhanger! Sudden urge to write fiction! After I write and receive feedback on several stories for an online community, a friend suggests I try NaNoWriMo. I participate in NaNo for the next three years.
2008: I decide to query agents with BRIAR-BOUND, my second NaNo novel, much revised and then titled JACK. I research agencies through Writer's Market and make a list of twenty prospective agents. I query my top 10 first. Get my first rejection in 10 minutes -- SUPERSTAR! Have several requests for partial or full manuscripts.
One of those fulls rests with Nadia Cornier at Firebrand Literary. She decides JACK isn't quite right for her (eek) but earns my eternal thanks by passing it along to Brand-Spanking-New (Not-Even-On-The-Website-Yet) Agent Chris Richman. By coincidence, I'm on vacation in Queens when Chris decides he wants to talk. (I maintain the coincidence. Chris is skeptical, possibly because I was vacationing in Queens. In December.) We meet, chat about books in general and mine in particular, and talk about our career goals. I leave calmly. Two blocks away, I show my husband Dave an envelope containing two signed contracts, and freak out.
2009: Enough partying already, it's time to revise! Chris leads me through three revisions, during which JACK becomes a much stronger project and gets a new title. In April, we go on submission. During that process, I get such consistent feedback from editors that I decide to revise again. This time, BRIAR-BOUND changes dramatically. At this stage, I create Stump, one of the three current main characters. Roughly 43.6% of this revision is new text.
2010: After three draft stages, Chris and I decide the project is ready for submission. Huzzah! Chris takes over and sends BRIAR-BOUND out. I open a YA novel I started writing in 2008 and try not to obsess.
Was there ever a time you felt like giving up? Why didn't you?

Never because of rejection or self-doubt. I did wonder early on if writing would become one of a string of hobbies in my wake. But it stuck. I feel like I've found the perfect outlet: years of being a fringe observer, gathering a wide range of skills, and exploring a lot of interests -- it's all paying off. Plus, I'm meeting a lot of great folks in all areas of the industry. Writing is so rewarding I can't imagine giving it up now. Besides, if I did, I'd have to become an actuary, and I'm already square enough. :)
Thank you, Shannon! You can find Shannon online at her blog daily pie or on Twitter @nomadshan


This week of interviews is being hosted by Elana Johnson, and several other bloggers are jumping on the bandwagon, including:
Be sure to check them all out for inspiring, first-hand stories of authors on the verge of publication!
Posted by Unknown at 2:14 AM

Best of luck with Submission Purgatory, Shannon! And thanks to you both for the interview!

Shannon, BRIAR-BOUND sounds like a lot more fun to read than an actuarial table. From my standpoint, you made the right career choice. ;)

Congrats, Shannon! Beth, thanks for another uplifting interview. :)

What a fun interview! Congrats, Shannon :)

Wow, Shannon. I have to tell you, I really need to read BRIARBOUND now. And your story is very inspirational. Thanks for sharing!

Wow, what a great story. I'm so glad I'm not the only one who had to revise a millionty times. Good luck on submission!

This is great, Beth, and thanks for sharing, Shannon.

Another great interview! Shannon, congrats and I look forward to hearing about/reading your book on day.

LOL! My husband is an actuary :)

Shannon, I love your time line of events!

BRIAR-BOUND sounds so fun! Best of luck with subs.

Oh, sounds like a fantastic premise for a book!! And what an inspiring story. A rejection in ten minutes? Ouch. But looks to me like she's well on her way to success. I'll be on the lookout for Briar-Bound ;)

Shannon, your book sounds awesome. I can't wait to read it. Thanks for sharing your time frame. It's inspiring to see all the years of revision (that's me) can pay off. Good luck.

I love your agent story! This rocks! Thanks for the interview ladies.

Great interview, Beth. And good luck on the submissions, Shannon. Your book sounds like something I'd love to read. :-D

I love how many writers were worried that writing just mught be another one of their hobbies. I think we all floated around until we realized THIS is what we were supposed to be doing.

"Years of being a fringe observer, gathering a wide range of skills, and exploring a lot of interests--it's all paying off."

I loved this! It's one of my favorite things about being a writer, nothing is wasted.

thanks to you both for the interview!
data entry india

And thanks, everyone, for your encouragement. I'll send it right back to you for your projects!

And well put, Miriam: nothing is wasted!