Rocket Girl: My View of the Launch of the Antares Rocket

So last week, I saw a rocket launch into space. 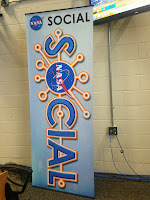 This is not something that I expected ever to be able to say. But the good people at NASA have started an amazing program called NASA Social. They basically take people from social media and invite them to be impromptu reporters of the cool stuff NASA does--like launches. If you want in on this, they're doing several more launch with NASA Social, and you can still apply!

So just what did I do with NASA? Well, this: 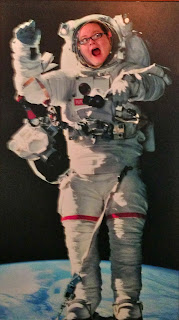 I became an astronaut!

Okay, just kidding. But I did get to go to Wallops for the express purpose of seeing a rocket launch, which is almost as cool. And as an official NASA guest, no less! 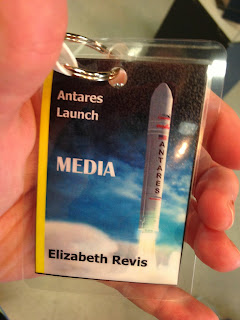 And lest you doubt that I got to see the goods... 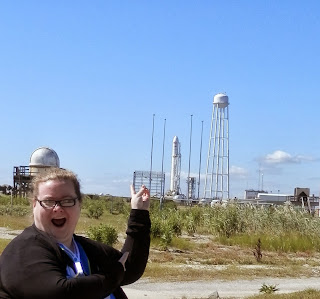 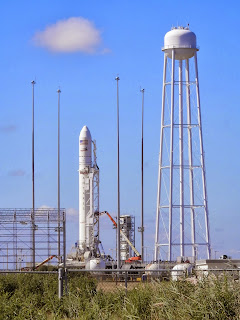 Another highlight? I got to finally meet long-time author-friend Jodi Meadows! You can read all about her experience of the trip here. It is more factual and includes less pictures of me geeking out.

The Antares rocket is carrying something called a Cygnus module--which is basically a giant storage container full of things for the astronauts on the International Space Station (ISS). What's on board? Chocolate.

Here's a life-size model of the container that was being sent into space, so you can see how big it is. Although, actually, it was rather small compared to the actual rocket!


The day before the launch, we had an awesome time touring the Wallops Flight Facility. Wallops is doing a lot of interesting and new things with space--I found the balloons, which can reach low orbit, to be particularly fascinating (that's how Across the Universe entered space after all!).

One of the coolest things for me to see, though, was how the rockets are actually made.

On site at Wallops is the Horizontal Integration Facility (HIF), which is a fancy way of saying "The Place Where They Make the Rockets."

You can see why it's called Horizontal--basically, they lay the rocket out, make it, and then when it's ready, stand it up properly outside the building.

Here I am in front of one of two engines used for Orbit 1--the same type of engine that was in Antares. All the tubes--including the tiny tubes in the bottom cone that look like ridges--are for moving around the kerosene that fuels the ship. Rocket kerosene, because that is a thing that exists. This trip was awesome, yo.

Here's a closeup of two of the three stages of the rocket. The Orbit 1, like Antares, has three stages. The long tube on the bottom holds the giant engines and lots and lots and lots of rocket kerosene. Then it breaks off when it the rocket breaks atmosphere, and solar panels open up and steers the Cygnus into orbit before it, too, drops away after the module connects with the ISS. 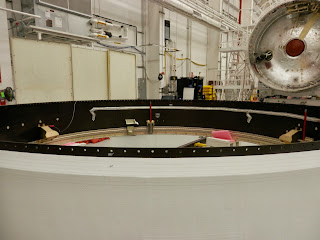 In the picture above, you can see stage 1--the long tube with rocket fuel--in the upper right corner. You're looking at it from the top--that red button is used to help with fluctuations as the rocket moves. The big round thing on the bottom of the picture shoes a white line around the inside, and red lines holding it up--this is the explosive that will detach stage 1 from the rocket.

Of course you know that I took detailed pictures of what makes stuff blow up.

After we saw the way the rockets work, we got to attend a pre-launch press conference and briefing about the rocket. This was really cool--we were there with the "real" media, and got to see the way NASA TV works.

One of the cool things about this whole trip was learning more about the space program. Funding came up quite a bit during the press-conference, and with good reason: this was the culmination of years of work (and millions invested) with a commercial partner. The Antares launched with NASA and Orbital Sciences, a private company, working together.

My knee-jerk reaction to this was negative, I'll be honest. I'm the girl who wrote about the FRX, remember? One of the big points of the Across the Universe trilogy was how when government turns to business, things get corrupt.

That's fiction, and the reality is, this was a partnership that makes a lot of sense. NASA works with two private commercial partners right now--Orbital and Space X--and they're using these private enterprises to do the low-orbit work, such as sending cargo to the space station--that enables them to focus their attention on other, bigger issues--deep space exploration.

And the running theme throughout it all was simply this: inspiration. During the briefing and the press conference, both NASA and Orbital made a point to mention the number of student projects going up with the cargo. They mentioned the Social program that enabled me to see the launch, and how they hoped that by spreading the word about the cool things like rocket launches, we'll inspire others to explore science and learn more.

After all, the NASA Vision is "to improve life here, to extend life to there, to find life beyond." It all added up to a very inspiring message of seeking beyond the boundaries of our own planet.

And guys? I want you to know, I was asking the important questions at the press conference and briefing. Now, I was too excited to actually get this exchange on tape, but here's how I remember it happening:

Me: You're planning on doing several of these low-orbit launches in the near future, you're working with commercial partners, you're planning on continuing this plan, and I wanted to know what you see the future of NASA and commercial ventures may be?

Official Science Person: We're planning on doing two more launches like Antares before the end of the year...

Me: No, what I mean is, do you think civilians are going to make it into space? Maybe like a lunar colony? Or day trips in orbit? *whispers* What I'm really asking is can I get to space?

Official Science Person: Oh, definitely. That is the future of the space program.


I take this to be an official and absolute promise that I get to go to space. I'll send postcards, don't worry.

But I know what you guys actually came here to see. The same thing I came to see. ROCKET LAUNCH!!! 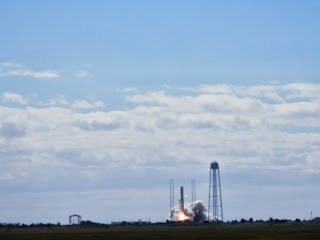 Wait, let me back up. We were about two miles away from the launch site. Here's what it looks like from the NASA seats:

I don't know how to put it into words, but if I had to pick just one, I'd pick awe-inspiring. And I mean that very literally. I was inspired to feel awe. Much of what NASA was speaking about throughout the two days was all about how they hoped that this would inspire others, and, well, it did. 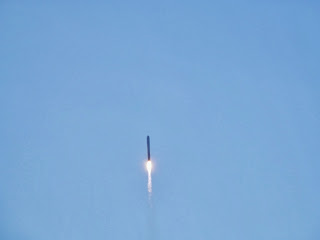 I can't tell you what it felt like to stand in those bleachers and hear "T-minus five...four...three..." To see the fires start up and, moments later, hear the low rumble of the blast. To see the rocket lift higher, higher, higher. To lose sight of it in the sun.

Here's the official NASA video of the event--far better than my version, but lacking in ecstatic whoops:

Awe-inspiring, yeah? It took just a little over five minutes for the rocket to reach orbit, and it'll spin around the globe for a bit before connecting to a station in space occupied with real people who are currently living there. We are in the future, guys, and it is awesome.

And me? I'm just going to go ahead and start packing for my cruise to the moon.