A common question I get is: “what’s the difference between MG (middle grade) and YA (young adult)?”

I guess the simple answer is this:
But I actually really dislike this description. To me, the most important thing that makes a MG or YA novel is not the age of the protagonist, but the style of writing. Typically, MG/YA novels tend to have certain tropes:
I tend to look at books as having two key elements: plot and character. Next week, I’ll talk more about what makes a MG/YA character, but today I’m going to show you the difference between a MG and YA plot.

As you can tell from above, the themes of both MG and YA novels are pretty universal themes that apply to many tweens and teens—discovering who you are, what the world is like, and your role in the world. And while nearly every teen goes through this as they grow up, lots of adults are still struggling with this concept, too, which is the appeal of crossover books—books that are pretty much universally loved and appreciated by both adults and younger readers.

However, the primary difference between MG and YA in terms of plot is that MG tends to have outward-focused adventures, while YA has at least an element of an inward focused adventure. The best cross-over (imo) is one that has both an outward and inward adventure.

As usual, I think Calvin and Hobbes can better explain what the real meaning of genres are: 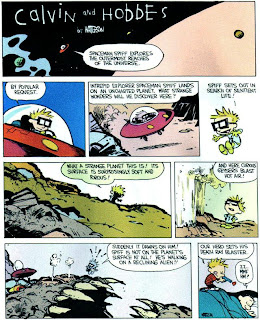 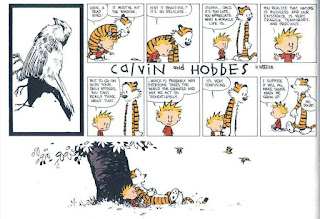 I'm glad to get your take on this! I'm writing a piece from the perspective of a thirteen year old, but I din't imagine it as MG. There's a darker tone and a complex inner stuggle that puts her, in my opinion, beyond her years, and so I always thought YA was more fitting.

I love your examples. I read somewhere that MG is more likely saving the world kind of stuff while YA is more introspective and angsty. Years ago I read something that said an adolescent's window to the world is a mirror.

Ha! Very funny. Can't wait until all that limitless understanding starts pouring into my brain...

Bravo! You've managed, in three comics and few words, to explain the difference between these so clearly. And it was Calvin and Hobbes to boot.