Writing Wednesday: WHEN to Outline

But here’s the thing: there are a hundred and one different ways to plan a novel—but when to plan it—that’s a different question. See, most people assume that you plan the novel before you start. After all—that’s when you’re planning to write.

But I’ve found something very different when I write. I’ve discovered that often, the best time for me to make an outline and story map is after I finish the first draft. For me, I don’t need to know what to write until after the first draft, but I do need a plan of what to revise after I finish.

I’m what you call a pantser—I write by the seat of my pants. (As opposed to a plotter, who outlines before writing.) I’ve long eschewed outlines. My attitude has been “if I know what’s going to happen, I don’t care about writing the story.”

I have learned that at some point in the writing process, you must get organized, and you must create an outline.

Sometimes called a “backwards outline” due to the fact that you write it at the end rather than at the beginning, organizing my novel after the first draft has been enormously helpful. So helpful, in fact, that I suspect if I were to use an extensive outline (as I am doing now with my current WIP), I’d still want to do a backwards outline.

When I was a teacher, one of my units to teach my tenth graders was Holocaust literature. The Holocaust was truly a tragic mark in our world’s history, but it’s difficult for us to comprehend just how tragic it was. The human mind cannot think in numbers like six million dead or population shifts. It’s too big. Our mind shrinks things down to comprehend them, but that means it becomes impossible for us to realize just how big a number six million really is. If you need proof of that, look at how blase we Americans are about our trillions of dollars in debt. We get that it’s a big number—we don’t truly get how big that number really is.

So to help my students better grasp the scope of the tragedy of the Holocaust, I create a scroll. It was over 300 pages long, and each page was filled with thousands of tiny dots. Each dot represented a human killed in the Holocaust. There were over six million dots. It took at least a half hour to unscroll the entire project, and every student had to hold up a piece of the giant document. And it was only then—after seeing six million tiny dots and realizing each represented a human being—that most students were able to grasp just how big a number that is.

My point is, when we write novels, there are tens of thousands of words. Hundreds of pages. And it’s really impossible for us to carry around the whole book in our heads—that’s why we wrote it in the first place. But once you finish writing the whole novel, you need to cram it all back in your mind so that you can see what works, and what doesn’t.

To do this, make a backwards outline. I typically do this on paper—I’ve found that if I write on the computer, it helps to plan on paper. I make two columns—the first is a list of the things I already have in the book. I go through each chapter and major scene and write just a sentence—sometimes just a few words—about what happens in that scene.

Then I make another list, right beside it. I list out everything that needs to be in the book. If my book is a romance, I’ll point out when the girl meets the boy, when the complications arise. If I was writing THE HOBBIT, I’d make notes about the introduction of Biblo Baggins, when Gandalf arrives, etc. I’m looking for the bare bones, most essential bits of the story.

It might look something like this. (Excuse the hastiness! I made this up on my iPad just before writing this.) 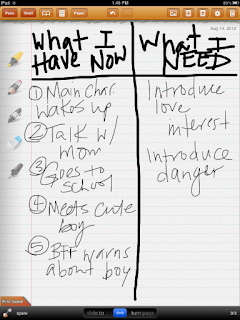 Doing this will typically show me that I have things in the novel that I don’t need. In this example, I’ve made up that the girl wakes up, talks with her mom, and goes to school—presumably over three major scenes or chapters. But the important part of the story is that she meets the guy and then learns he’s bad news. That—a desire and a complication—is plot. The other stuff is fluff. So I cut the first two scenes that don’t reflect on the story, and then combine the next two. Do I really need a long scene of the main character going somewhere? That’s a typical problem for me—I show just how the characters move around, when in reality, I could just say something like “On the day Maria went to school to take her SATs, she met Brian.” BOOM. She’s at school, and the first part of the plot is now showing up in the first scene, just like it’s needed. 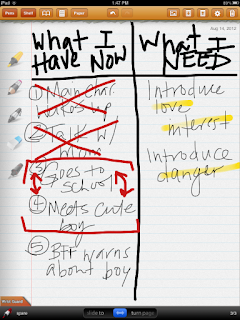 Typically, a backwards outline is most helpful to revise at the end of a first draft. I guarantee you that there are scenes in your novel that you don’t need. And there are scenes that you do. Doing the backwards outline helped me revise ACROSS THE UNIVERSE when I realized that I had too few clues for the characters to solve the mystery. I was able to figure out exactly where I needed to add a clue. It helped me streamline red herrings and know where to add complications.

You can also use a backwards outline if you’re stuck. For me, writer’s block just means I’ve messed up somewhere and I don’t know how to fix it. A backwards outline can get me unstuck—I go through what I have first, then what I need, and then I continue with the “what I need” chart. After that, I can add ideas of what to add to the novel to get to that part of the chart.

And another point? A lot’s been said about the difference between plotters and pantsers, but my main point today is: it doesn’t matter if you’re a plotter or a pantser. You’re going to get the planning work done at some point in the manuscript, either before or after.

Thanks, Beth. Blog entries like this one are really helpful :)

Thanks so much, Beth. I've never thought about creating a backwards outline but I'm going to try it while drafting this novel. I hate outlining before I write but I can't write if I don't know where I'm going. This sounds like it may be the perfect solution. :)

I've always said the same thing about outlining. I've tried it before and it just takes all the magic out of the story. However, because I pants them, my first drafts tend to meander way too much. I've never thought to make a backwards outline, though! I'm definitely going to give it a try.

Great post, Beth. I like this idea a lot. Organizing a novel after the first draft sounds perfect for me, going to give it a try.

Great post, Beth. I'm a pantser like you, but I do the same thing for my revisions.

I also use this if I get stuck in the story, either in the first draft or revisions. If I've been concentrating hard on getting one scene right, when I come out of it, I've sometimes lost the rest of the story and can't remember where I was going, like taking a walk, stopping to examine a really beautiful flower, then forgetting which direction I came from.

When that happens, I do a chapter analysis, writing -- like you do -- a couple sentences to describe each chapter or scene leading up to this, so I can figure out where I was and where I need to go from here.

Very interesting, Beth. Hey, I love the scroll to make the number six million more concrete. You wouldn't still have it stuffed away in a box of teacher-y stuff, would you? Do you remember how you created it? Our Ga curriculum changed this year, and Diary of a Young Girl is one of the novels we're going to read this year.

I will miss you at Dragon*Con this year. I hope you consider coming back next year.

Thanks for validating what I already do! I thought I was weird for writing my outline after the first draft!