The Bookanistas are a group of writers - in various stages of the publishing process – who have decided to band together and review the special books of our peers.  No negative reviews here! We post every Thursday and cover various topics– upcoming ARCs, books we love, special diamonds in the rough, classics, and even cover reviews.
Here is a list of the Bookanistas: Christina Fonseca, Jamie Harrington, Michelle Hodkin, Kirsten Hubbard, Shelli Johannes-Wells, Myra McEntire, Shannon Messenger, Bethany Wiggins and Suzette Saxton, Beth Revis, Lisa and Laura Roecker,  Sarah Frances Hardy and Katie Anderson, Scott Tracey, Carolina Miller, Gretchen McNeil, Jen Hayley and Shana Silver
PRISONERS IN THE PALACE
by Michaela MacColl 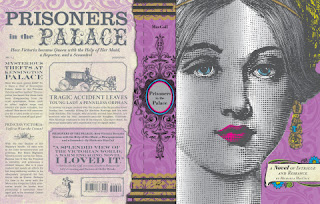 I knew I wanted to review this book for Bookanistas when I was only about 30 pages in--because it grabbed my attention that quickly, and wouldn't let go at all.
I first found this book by an interview on The Elevensies site--I thought it was intriguing that the cover didn't have the title on the front (I found a pic with the whole jacket spread for you to see) (and I was going to link to it here, and can't find it at all, fail). The cover's even better when you see that the newspaper-style of the back is actually very relevant to the story. But what really sold me on the book is that it told the story of the young Queen Victoria...before she was queen.
I'll admit: my image of Queen Vic is of her being old and shriveled and dressed in black. I'd never even considered what she was like while young, which is why this book stood out to me. And let me tell you: I devoured it. I read late into the night, three nights in a row, and finished it with a smile on my face.
Things I loved about PRISONERS IN THE PALACE:
I highly recommend this book for any history fans out there--and anyone just interested in reading an awesome, gripping story!
PS: Sorry this is late--my internet was down late last night and early this morning!
*~*~*~*
Other Bookanista Features Today:
Posted by Unknown at 11:58 AM

Oh, this one sounds intriguing! Thanks for the review, Beth. :-)

Beth, every time I come to site I just heave a sigh of happiness because it's so, so beautiful! I know I've told you that before but ... had to say it again!

So, I hadn't heard of this book, and I'm thrilled you reviewed it! As a Canadian, I have a built-in love/fascination for all things Royal. I'm gonna add this to my list! Thank you!

Man, you always highlight the coolest sounding books I've never heard of. I love it!! Must read this one. I love the historical nature of it, but the fact that it's not told from the historical figure's POV, especially that it's a house-maid. And what a cool cover. Very original and unique.

I am so going read that book because:
a. Its about Queen Victoria! ahhhhh!
b. The cover rocks
c.its a historical fiction
And I think I'll try to read as many books by those authors!

Sounds like a great book : ) I recently watched The Young Victoria and it was pretty decent, so I`ll definitely look for this book. Thanks for telling us about it!

Sorry my computer is being wierd, I read the book,and I think it is really AMAZING!!!! I really enjoyed it!