And of course, you guys know me: I celebrate by giving things away! And because I have the very best publisher in the whole wide world (Razorbill! Woot! Woot!), they are once again joining in with the celebration and offering FIFTY awesome prizes in addition to the three big prizes I'm offering!!!

Entering to win the prizes is super easy. All you have to do is take a picture of yourself with your copy of ACROSS THE UNIVERSE. That's it. Just snap a picture and send it in, and you're entered!

How easy is it? Here's how easy:


That little pic of me up there? Totally qualifies for an entry into the contest. If, er, I wasn't already disqualified since I'm the one running the contest. But you know what I mean.

I know the book isn't technically out until January 11th, but I wanted to let you all know (1) that you should rush out and buy your copy on January 11th so you can enter and (2) you can start planning your awesome picture now :D :D :D

First, here's what Razorbill is providing for you--custom made, totally sweet, amazingly cool WATER BOTTLES! And trust me--when you read ACROSS THE UNIVERSE, you are going to know how very very appropriate this prize is!

To win ONE OF FIFTY water bottles (dude! Those odds are awesome! Thank you Razorbill for providing them!) All you have to do is upload your picture to the Facebook Page! You were going to do that anyway, right? Now when you do it, you can win a prize!

But that's not all! (<<--said in a TV game show announcer voice)

There are also THREE awesome prize packs that you can win!

The grand prize is: 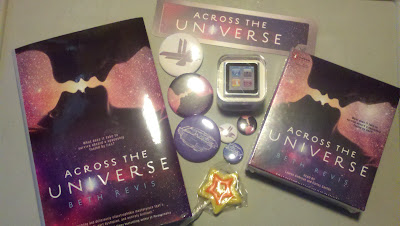 Yup! You saw that right! A multi-touch iPod nano! These little things are so cool--they are small, but they still have the multi-touch screen (like an iPad). I really wanted to include one of these in the prize pack because in my book, the characters use something called "floppies" which is a computer, but the size and thickness of a piece of paper, and the multi-touch controls in the floppies were something I developed in the book after playing with my own iPod.
To win the grand prize pack: all you have to do is submit a picture of yourself with the book in some way. If you enter for the Facebook water bottle prize, that totally counts and you're already entered for the grand prize! How easy is that?! If you for some reason don't want to enter the Facebook prize, you can also enter for the grand prize by either posting your picture on your own website, tweeting the picture, or emailing it to me at ATUContest@gmail.com.
But that's not all!!!
You guys know I love how creative you are, right? I mean, you guys are pretty awesome, and have come up with some awesome stuff. And, well, I'd love it if I could associate ACROSS THE UNIVERSE with some of your awesome.
So I'm doing another prize pack. 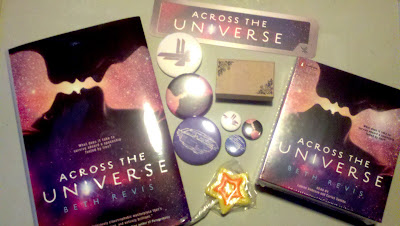 To win the best picture prize pack: all you have to do is have the coolest picture of yourself. This is going to be totally arbitrary, and totally up to me--whatever picture I pick as being the most awesome gets this prize. You can do anything--you can pose in a cute way, you take the book somewhere cool and pose with it in the awesome location, you can do something neat and have the book with you while you do it--it is 100% up to you, and which ever of you take the most awesomest cool picture, gets the prize! I am seriously excited to see what you can do with this!!!

I also really want the whole wide world to know about ACROSS THE UNIVERSE and I want to reward the people who have helped me spread the word about the book. So...at the bottom of the entry form, there's a space to fill out who told you about the contest. I am going to take the top ten people who refer the most people to the contest, and I'm going to draw a name from those ten and give the winner this: 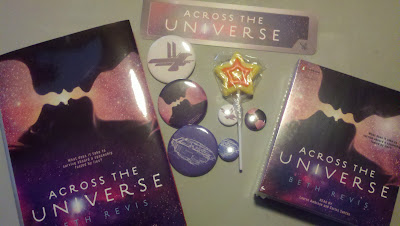 PRIZES INCLUDE:
-Signed hardcover copy of ACROSS THE UNIVERSE
-Audiobook version of ACROSS THE UNIVERSE
-Pin buttons and book mark and a star sucker (yum!)
To win the referral prize pack: all you have to do is advertise this contest and remind people to add your name (and website or twitter or facebook or whatever) to the bottom of the form. I'll add them all up and reward one of the top ten referring peeps!
BUT THAT'S NOT ALL!!!!!!!!!!!
There are also: rules!
OFFICIAL ENTRY RULES:
BUT THAT'S NOT ALLLLLLLL!!!!!!!!!!!!!!!!!!!
Oh, wait. Yes, it is. That's all.
Except for the entry form!!
PS: Thank you, Kiersten White, for letting me use your super-cool contest idea!

Here, have another picture of the awesome custom water bottles: 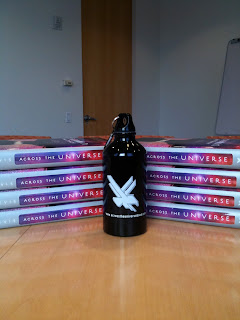 Questions? Post in the comments section here and I'll answer!
Posted by Unknown at 1:03 PM

So awesome! And I love the "Nope, don't enter me" on the form. You are too funny. :D

*whimpers* Um. *waits on ATU to arrive in the mail* I am SO coming back when my book gets here. This contest is made of so much win I don't even have words for it... XD

Awesome contest. I'll be back after I go buy the book next week.

I have no idea how you come up with these incredibly awesome contests, but I'm very happy about it. I'll be running out to get AtU on the 11th and picture taking will commence. I'm already thinking up some ideas.

This is hilarious and amazing and stupyfying. What a contest! What book! What a writer!

OMG, just when exactly is Across the Universe available in Germany???
*heads over to amazon to check my pre-order status*

Dear God Woman, how do you manage to sleep at night? You are sooooo close to launching now! I imagine there is much squealage in your household right now!

So happy for you!

Beth, you and Razorbill are too cool for words. I can't wait to re-read it when my shiny new copy gets here!! Those prizes are freaking amazing! :-)

Sa-WEET! Linked on my blog:) I posted about it yesterday, too. Can't wait to read it!! I'll be back to fill out the good stuff later. :)

Ooh...black and shiny! The only problem for me? I live in a cold place where the roller coasters aren't operating or I'd take a picture of me with it on the tracks. ;) Sadness...

You really know how to throw a party girl! :0D Thanks for the contest.

You went from epic to epicer to epicest. Gotta get my copy of the book and return with a photo!

I'm with Amanda. Waiting for ATU to arrive in the mail. Hurry, hurry...

So awesome, Beth. I'll be back to enter and I'll blog about it. lol

Amazing contest, Beth! Looking foward to getting a copy soon. Happy wishes to you on your upcoming release!

Hi Beth :)
*waves*
That is a definitely a giveaway contest with MORE EPIC!
All the best,
Rob

When is the cutoff?? I have a really awesome idea for the contest.

But mostly I just want to read ATU. And I still have to wait.

WOW. That is some AMAZING swag. So freaking awesome. What day is the 11th?

*runs off to check*

I am excited for your giveaway! Thanks Shannon! And happy to meet your you and your blog! Can you tell I'm excited? I can't stop using exclamation points!

Awesome contest Beth! I can't wait to read your book! =)

OMG... those penguins in your sidebar... I about died laughing! C'mere ickle pengie!

Obviously, the most important question to be asked here is: "Are you wearing your Across the Universe nail polish in that photo?" :)

FI-NAL-LY!! I finally filled out my entry form. Phew! What a killer wait it has been. I hope this day was everything you dreamed of, Beth! :-)

Just wanted to let you know that I finally posted about this epic contest! Here's the link: http://writersally.blogspot.com/2011/01/winner-of-perilous-beth-revis-atu.html

Phew...I'll be back to enter. I'm still waiting for my book. Dang it!!

I entered! I posted on the FB page...I almost didn't want to enter for the water bottle just because I was afraid of people stealing my idea, lol. And thanks for having all of these great giveaways!

Hi. Love the contest. Elise @ Bookish Delights referred me to your contest. I blogged, tweeted and face booked it. :)

Best! Good luck with your book. If you ever need a blogger and or bookseller to rview it, just let me know.

Thanks for the awesome giveaway! :)