The Weeks of XVI: Banned Books and Contests and Interviews 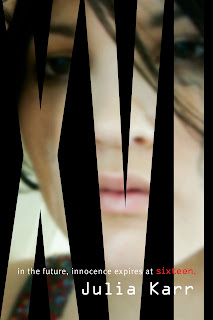 Julia Karr is the author of the upcoming dystopian title, XVI, a novel where turning 16 has dire consequences. In order to celebrate the book's release, Julia's on a blog tour for the 16 weeks before XVI comes out--and this is week 14!

For each of the 16 weeks of the tour, Julia's going to talk about a specific aspect of her book. The kicked off on Julia's blog--for the 16th week, she discussed her 16 favorite things about Chicago (where the novel is set) and gave away the first chapter of her book to everyone. For week 15, Julia was asked 15 questions by MG author Sheela Chari on the topic of vegetarianism (her main character is a vegetarian) and gave away a copy of the Chicago Diner Cookbook. Today, the 14th week, Julia's going to discuss banned books, which feature in her novel, and give away one of her 14 favorite banned books! 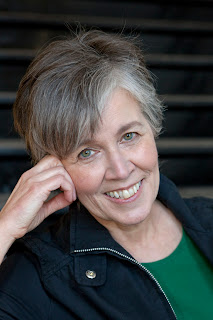 Beth, I’m thrilled to be here today. Thanks so much for inviting me to guest blog!

1. What's your opinion on banned books?
I think banning books is wrong. Discussion about disputed books is good. Controversy provides a learning experience and should be taken advantage of. Books should be read and discussed, not banned.

2. Do banned books play a role in XVI?
They do. In my future world, there are certain books that have become self-fulfilling prophecies and the government doesn't necessarily want people noticing that.

3. Which books in your story are banned? Why?

4. Why did you decide to feature banned books in your story?
In any future society where the government wants to control the general population, it must
make them stop thinking for themselves. Reading books is a key to unlocking critical thought
processes - therefore, any totalitarian government would need to control what reading materials
their citizens would have access to.

5. What are your favorite banned books?

Because this is Week 14 of the 16 Weeks to XVI, we’re got 14 children's books that have, at
some point, been challenged/banned. For this week's contest, (open from Thursday morning to
next Thursday at midnight) commenters (either here or on Julia’s blog) will be offered their choice of one of these fabulous books as a prize!


Beth - thanks so much for having me here today on the countdown to the release of my book.
But, mostly, I’m glad to be here and to be able to talk a little bit about book banning, why it’s
wrong and why people need to read banned books and write books that will be challenged.
Because as writers, I think we have been given an internal charge to be truth-tellers and not to be
queasy about laying out the hard stuff! Thanks again!


There you have it, guys! Now, go forth and comment--and be like the cool kids: Read Banned Books!
Posted by Unknown at 2:27 AM

Anyway, thanks for the interview! It was really informative, and it was nice to see what you thought, Julia! I can't wait to read XVI. It looks amazing, and all the big bloggers have received copies already. Hope all is well!

Great interview and a very broad range of books to choose from :)

I would totally add MARS RISING to my wishlist.

XVI sounds like a book I would love. I'll have to get it when it comes out.

Banning books is crazy. Why would any forward thinking society ever think it was a good idea?

Great interview! The book looks like it will be right up my alley. Also, in honor of banned books, I am reading Lady Chatterly's Lover with my local book club. Although it is no longer banned, it once was. So that totally counts. Also, there were obscenity trials in a few different countries...over this one book! How crazy.

Thank you for the interview! It's definitely true that any totalitarian would need to restrict what their citizens can or cannot read. :)

I'm all about discussion, as well, not banning. All too often the important message gets lost behind the controversy.

Great interview, Beth. I love that you featured a book that spotlights book banning during this week. But also XVI just looks amazing! I can't wait to read it.

Really looking forward to reading XVI! Great interview, and thanks for the giveaway.

I've been wanting to read "Perks of Being a Wallflower" since I noticed it's made the banned book list nearly every year for the past 10 years. It has me curious!

Fabulous interview! I've seen this book around. Love the cover.

Great interview! I hadn't heard of this book before, but I'm totally adding it to my list now. :) bookworm396 at gmail dot com

Great interview! I've been reading a lot about XVI. Can't wait to read it!
I am surprised by some of the books on that list.

Why is it that people always seem to challenge the best books? I tend to love every book I've read on banned books lists, and now want to go out and read the rest.

Hooray for new books! This one sounds awesome. :)

Awesome interview and awesome choice of books! :D Freedom of information is so important. XVI seems like it'll be a thought-provoking read!

Sigh, I loved banned books week. I feel so rebellious when I read them :). Thanks for the great guest post!

Great interview! I hadn't heard of this one yet, but it sounds awesome! :-)

That is seriously cool to feature banned books!
Great interview! I'm counting the days till I can read the rest of this! (after reading the first chapter)

Can't wait to read XVI! And I love the sound of the fictional banned book, Mars Rising.
Thanks for the interview, the contest and promoting banned books, ladies.

Thanks for sharing. Harry Potter Rocks!

Twenty Boy Summer is on my tbr list! I didn't realized it was banned. Now I wan't to read it even more. Great interview.

Thanks so much for having me here today, Beth! And thanks everyone for all the great comments! Winner will be announced next week. Any additional commenters between now and then will be eligible, too. :)

What? No The Giver? And you call yourselves dystopian lovers. I'm in shock.

Thanks for the great interview! I love that she wants to write a book that she made up for XVI. I know the feeling.

Great topic and conversation! And now aren't Catcher in the Rye and The Outsiders required reading in most high schools?

I am dying for both XVI and Across the Universe.

An amazing interview, and I agree with your stance on banned books.

I would love to win To Kill a Mockingbird, or Twenty Boy Summer.

(Or an ARC of either author's upcoming release, banned, or no! ;) )

Great interview! A lot of those are some of my favorite banned books too! Thanks so much for the giveaway.

It saddens me to see so many great books on this list.

Amazing interview. I hate banned books too. It's crazy. This book sounds great though, very cool!

The winner of this week's contest is JEM. YAY!

I love banned books. I think banning a book makes people want to read it more. I love HPotter!