Speak Loudly: The Rights of Americans

And while this is a PG blog, I'm gonna knock that rating up to PG-13 to say simply: that's bullshit. 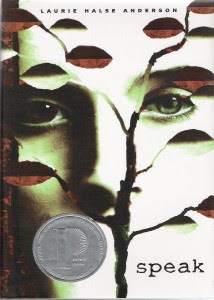 If you've not heard (it's lit up Twitter) a man claiming to be Christian has written a newspaper article calling for censorship on certain titles, including Laurie Halse Anderson's SPEAK. His reasoning? He claims that the novel contains scenes that are "soft pornography."

In case you've never read this book, it's about a young girl who's raped and--throughout the course of the novel--gets up the courage to speak about this rape.

Now, there's something inherently wrong (and rather sick) about someone who thinks that rape is equivalent to pornography. And there's also something wrong about someone who wants to ban a book that has made hundreds of thousands of people think about consequences:


And it is that last one, I think, that has prompted so many people to #SpeakLoudly, a twitter movement to tell the world about this book.
Others have spoken more eloquently than me about the subject, the best being, I think, CJ Redwine's account. She speaks truly, and her account is certainly more Christian than the man objecting to SPEAK's validity. And since we're arguing in terms of whether something's Christian or not, Veronica Roth's rebuttal is spot-on.
As for me, I can say that I taught this novel once in high school (I only taught American literature once). And I loved watching the hulking, towering football players crouched in their desks over this slender volume. I loved watching the kids tell me they didn't want to do an activity or watch a movie: they wanted more reading time. I loved the group of girls who snuck off on their bathroom break to run to the library and check out the rest of Laurie Halse Anderson's books.
The kids did art projects based on the book--the main characters first learns to "speak" through her art, so I gave the kids a chance to try that.
And some of them "spoke" of harsh things. Not rape, thank God, but things I wish sixteen and seventeen year olds didn't know. But because of that book, they all knew they had a chance to speak, and that we were all listening.
On the wall of my classroom, I made a poster. It's one of my favorite quotes, and it's by the French philosopher, Voltaire:
I may not agree with what you say,
but I will defend to the death your right to say it.
It became a favorite quote among my students, too. When debating, many students (without my prompted) would end their debates by quoting those lines. They recognized that the freedom of speech is one of our greatest rights as Americans.
I think the man calling SPEAK soft pornography is wrong, misguided, misleading, and, frankly, bullshit.
But he has the right to say it.
But he does not have the right to silence me. Or my students. Or the students in his school district.
My views on censorship are simple:
The idea that one should stop anyone from speaking--which is, essentially, censorship--is actually a central theme of the book SPEAK.
Censorship is about about absolutes. "If I don't like it, no one will!" When has there ever been a book that everyone liked? There isn't one. And just as there's not a book that is universally loved, there is not a book that is universally hated--and therefore, there is not a book--not a single book in the entire world--that deserves censorship.
It is fine if a parent doesn't want his or her child to read SPEAK. But it is not fine for one man to try to rip the book out of the hands of every student in a school district.
So: Speak Loudly. Laurie Halse Anderson is asking for your help. Will you speak up?

I need your help.

Please share your experiences with SPEAK; your own response to the book, or the way you’ve seen it work in a school setting. Tahleen has already posted her thoughts on her blog. You can do the same. Please share links to your blog in Comments.

But then, please speak up to the people who can make a real difference in Republic, MO.

You can submit a letter to the editor of the News-Leader.

You can write to the superintendent of the Republic School District, Dr. Vern Minor, or to the high school principal, Daren Harris.

Beautifully said. CJ's post had me a mess earlier today - such courage and grace is humbling. My post isn't nearly this eloquent - 10 words and CJ's link. It's too important to not discuss.

I'm so with you. No one has the right to rip this from the hands of people who are desperately searching for these answers--these voices. Well said, Beth. You're more eloquent than you think.

If it's all right with you, I'll just link to your post here as you said everything I would want to say and said it better.

I had to come out of my reader and say I LOVE YOUR VIEWS ON CENSORSHIP. It is parents who should take an active role in what their children are reading, not sit back and let others place blanket bans on things.

Beautifully said in your post and beautifully done in your classroom, Beth. This is eloquent.
I listened to Laurie's poem earlier today and read C.J.'s post--they tore my heart out.
We must all stay vigilant, because those self-appointed censors are at it all the time.

Oh, that poem made me cry.

You're right. The book wasn't written for the man who doesn't understand it, but he shouldn't be allowed to take it or others away from those they were written for.

I haven't read SPEAK yet and I don't know if I will, but I hate hate hate censorship. I agree with you that no book should be banned. Amazing post!

Great post. I love SPEAK. It's so outrageous that he's trying to ban the book and his reasons are even worse. I'd link up if I had a blog.

Reading The Protocolls of Elders of Zion doesn't make you an antisemite, but it might, if you don't know that's an antisemitic forgery created to justify antisemitic actions.

Ketutar, perhaps "censor" isn't the right word. But I do believe that a parent should discipline a child--for example if a child picks up a racial slur from someone else and repeats it, it's the parents' responsibility to discipline the child, explain why it's wrong, and so on. Likewise, if a child is instructed to read a a book at school, for example, that the parent disapproves of for whatever reason, then the parent has the right to dictate that the child doesn't read that novel. It doesn't necessarily have to be that the parent disagrees with the book. If I had a child who was raped and in therapy for it, I might not want that child reading a book about rape at that time in her life.

Of course, there does have a to be a limit to this, and at a reasonable age, the child must decide for him or herself what's right and wrong. I don't think this necessarily even starts at one set age, like 18 or 21. When a child starts realizing his or her own morals and beliefs, that's when the parent censorship ends. It can happen at any age--I've seen kids mental and socially mature at age 12, reading materials I would not hand to some of my immature seventeen year old students.

So glad to see so many people speaking out against censorship. I have not read Speak yet, but I plan to buy a copy this week.

Ironic that this issue comes up right before Banned Book Week.

Also, Laurie Halse Anderson gave me permission to post a section of the censorship page of her blog to my Banned Book project. Which means so far my authors are Laurie, Ellen Hopkins and you! :)

This is such a great post, and I think that might be my new favorite quote. This whole situation is awful. The News-leader is my home paper; it's delivered to my house daily. It's so weird to have this happened so close, but seeing everyone speaking out has been so amazing.

I'm not American but can agree entirely with what you say here. Thanks for your blog post; it was intelligent, well argued and full of common sense - unlike this Scroggins bloke (what an idiot!)