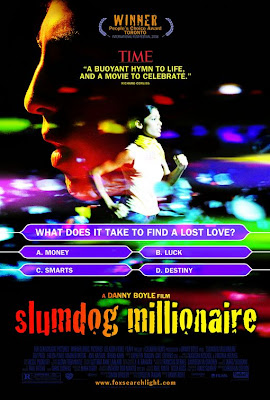 We're on a roll, y'all. See, I've been reading a lot lately. Reading...not writing reviews. So expect a lot of that coming up soon. Hope you don't mind! But this post isn't about a book. I'm doing one of my super-rare movie-instead-of-book reviews. I've actually only ever done this before with Eagle Eye, which seems odd because these two movies are very difference.

But, even as I was watching Slumdog Millionaire, I was thinking about how perfectly written it was, and, actually, composing a writer's review of it.

Five Sentence Summary: Jamal and his brother live in the slums of Mumbai, India. So how did Jamal rise up to win the top prize on the top quiz show in India? Framed by the game show questions, the movie explores just how Jamal knew each of the questions through flashbacks of his experiences as one of the poorest of the poor. But Jamal's not doing the show for money...he's doing it to find his long-lost love, fellow slumdog Latika, whose history is tied inextricably with his and his brother's.

So what can we, as writer's, learn from this book movie?

[As always, highlight the blank spots for spoilers. I left the not too shocking ones black, but the hidden ones are a bit extra-spoilery.]

1. Motivation: Throughout the movie, the characters consistently acted according to their motivations. There was no random surprise, no shocking twist. That's not to say shocking things didn't happen--they just happened according to the character's motivation. For example, Jamal's brother Salim's strongest motivation was possession of his brother. Every interaction between the two brothers subtley stressed this motivation. Early on, when Jamal is obsessed with the Bollywood actor, his brother's spiteful reaction is due (at least in part) from jealousy that his brother is obsessed with someone else. Later, when Salim and Jamal are on their own, Salim does not want Latika to become their third musketeer--because he wants Jamal to himself. And then again, when Salim rapes Latika and kicks Jamal out of the hotel room, he does this because he wants to take away the one thing that could lead his brother away from him. None of this is explicitly stated--in fact, my friend and I had to talk a lot over dinner to discuss what the motivations actually were--but once we'd figured out what the one driving force behind each of the three main characters was, we saw how well each motivation defined each character's action. For those interested, my theories on the main motivations are: Salim: possession of Jamal. Jamal: finding and being with his love, Latika. Latika: survival.

2. Non-stupid Romance: Look, I like a chick-flick as much as the next chick. But let's be honest. Most American romances are STUPID. You see one, you see 'em all. Girl likes boy, boy likes girl, and a comedy of errors then continues until they finally just freaking disclose their mutual liking in the end. Argh. These romances aren't a story--they're a joke. And while that's fine if you want fluff, I don't equate that with love. THIS story had love--real love--and a real underlying romance. There's nothing in here of the too-common comedy of errors. Jamal loves Latika. That's clear from the time they're children. He never hides it. Everyone--Latika, Jamal, everyone--knows his love for Latika. The romance isn't about will-they-or-won't-they...it's about can-they-or-can't-they, given their poor status in a unforgiving society.

And for me, that's the key to a good romance story. Not whether they will be together--because that just comes down to whether they have the courage to say they're in love, doesn't it? No, the real romance is whether they can be together, whether the world will conspire to let their love be realized. That's a story.

3. Speaking without words: Look, I know this is a movie, not a book. And those powerful visual shots are something that can only be expressed with sight: the camera rising over the vast slums of India, the scenes of silence between the characters. But we can emulate that in writing. When Jamal wants to invite Latika into the train car with Salim, and Salim doesn't want her, the camera shows Latika in the background, sitting in the rain, Jamal in the midground, staring at her, and Salim in the foreground, lying down with his eyes open. Nothing is said--but it's clear that Latika is alone, trying to survive; that Jamal has already started falling for her; and that Salim, with his eyes wide open, is begining to realize that his obsession with his brother may lead him to do bad thing, such as leave an innocent girl alone in the rain. Not a word is spoken, but so much is said.

We may not be able to show a picture of the characters, but we can show their motivations/feelings/desires without having the characters state them. If Salim had said, "I don't want that girl on the train with us, she'll take you away from me," his statement would have been true to the character--but don't hand-feed your readers. Show their actions and let their actions show their character.

PS: A word to the wise: Don't show this one to kids, not the very young. The outside story, a poor kid getting riches from a quiz show, sounds like it'd be kosher for the young ones, but there are some very disturbing situations. Realistic, not gratuitious--but not for the young. I don't say this lightly--I could care less if you show a kid a movie where cars get blown up or bad guys die--but this movie shows a real, no-holds-barred slice of life, with all the nitty gritty, and it's not something I'd show to kids less than high-school age. It's not the violence or sex (it's pretty clean in those areas); it's the realism.
Posted by Unknown at 8:16 PM

Great review, Beth. Interesting take on romance. :) If you haven't, go check out Natalie's blog on romance. She has a series of posts up this week. They're great!


Can't wait to see this movie now. You did fantastic. :)

I LOVED this movie!! and I love ur review too!! I was captured by the well written script as well--it's rare to see quality like that do well in the light of all those lame action movies and kid flicks!

I really enjoyed this movie, too. And great review, though I disagree with a few points. :) But I married into the Indian culture, so I have a viewpoint that few others have. :)

Salim doesn't want possession of his brother. He's the older brother, and their father is gone, which makes him the man of the house. He's still a child, which is how Jamal sees him and why he doesn't acknowledge Salim's dominance. But Salim sees himself that way, and so he keeps acting that way. Hence the constant battles between them. I've seen this over and over again in Indian children, even when the father is still in the picture.

SPOILER WARNING!!!
When they lose their mother, Salim's dominance is solidified - it's the way Indian culture works (the eldest brother takes over running the family once their elders are no longer around). This puts an amazing amount of stress on Salim, especially since they're homeless. So it's not Salim wanting possession of Jamal when he turns away Latika in the rain, it's that he doesn't want to be responsible for another person. Because that's what would happen. And the fact that his eyes are open when Jamal calls Latika over shows that he's already getting tired - he doesn't have the energy to fight his brother on this, and may even be questioning his ability to take care of them.

Regarding Salim kicking Jamal out just after reuniting with Latika, I highly doubt Salim would have ----- her. It happens in India, but it's RARE. It would also be completely stupid of him to do so, because she's worth more whole. I think he presented her as a gift to the gang leader that he sought protection from - thus clinching protection for himself and for Jamal.

He probably saw kicking Jamal out of the room as further protection, so Jamal wouldn't have to live the dangerous life in gangs. I think that's why he was so happy and sounded so normal when Jamal tracked him down.

Wow, didn't mean to go on so long. :) But this was a great movie with lots of great things about it. Thanks for posting a review, and sparking this discussion. :)

Oh this is an interesting discussion. Now I'll have to see the movie! Thanks Beth!

Pen, I SO agree with you on the writing. You can tell I've watched a lot of bad movies when I start thinking about how great some of the basic, like plot, characters, and writing are in this movie!

Tabitha: THANK YOU SO MUCH FOR YOUR COMMENT!!! It was brilliant to hear your take on it! Now that you mention it, I think I do agree with you that Salim didn't do that thing I hid in the review, but it really was my gut reaction at the time...and I still think it's a possibility. But I loved hearing your take on the movie. THANK YOU!

Kelly: No worries! I don't usually do that sort of thing--I figure parents can tell from the previews if there's blood/violence. But while this movie is, in general "clean" in those areas, it really felt too adult in other areas. It's the kind of movie that, if I had kids, I would think it would be OK to show them, but once it was over, I'd feel terrible for letting them see it.