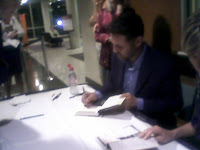 I'm sure you've heard of Khaled Hosseini. The author of the instant best-seller The Kite Runner and the other instant best-seller, A Thousand Splendid Suns, Khaled Hosseini is an Afghanistan native whose family had to apply for political aslyum when he was a child. Now living in California, Hosseini's first book was about the power of friendship in Afghanistan and his second was about women under the strict Taliban rule.

On Wednesday, Charlotte, NC, public libraries hosted an interview with Hosseini. I didn't take any notoriously long notes at the event as the interview will be aired on the radio on WFAE 90.7 in the Carolinas, and should be available for podcast download soon.

On the one hand, this is ultimately very depressing for me. I've got nearly 10 novels hidden under my bed, books that just weren't good enough for me to get published. I've literally written tens of thousands of pages of fiction. He wrote one short story that developed into a book, found a publisher relatively quickly (writing to publication was about 2 years), and his first book was an international best seller. Then, three years later, his second book was also an international best seller. And I've still got tens of thousands of unpublished pages.

To say nothing of the fact that his writing career has been so lucrative that he gave up being a doctor.

But, on the other hand, his talk was also inspiring and uplifting. He wrote for the same reasons we all write: to tell a story. He struggles over characters. He found writing difficult at times, and wrote and rewrote. He did not intend to write an international bestseller (much less two)--he thought his books would achieve only minor success among people interested in Afghanistan.

I really enjoyed hearing about how he approached craft. Hosseini said that he fell into writing; he never took a class, he never got a degree in writing. He just wanted to write, and it came naturally to him, like a piano player who can't read music but can play beautifully.

And, like all writers, he struggled. When I read The Kite Runner, I felt that the writing was beautiful. Just beautiful. And I imagined a scholarly, stately author who spoke and had roses fall out of his mouth. But no--Hosseini said that he went through many drafts, that he had to really work to make that beauty, and that it was not as easy as he makes it seem. The mark of a true genius, really.

In the end, I came away with this: Hosseini was telling the right story at the right time, and he told it well, and he worked to make his book beautiful...and that's all that's needed. I look at my own work now, and know that what I need to do is the same: find the right story, tell it as best as I can, and work to make the words sing.
Posted by Unknown at 6:56 AM

Yes, that is amazing. Writing so well & so profitably that you can walk away from doctoring. Wow.

Yeah...I can really only imagine!

Beth,
You are so fortunate to have been able to hear him speak. I love Khaled Hosseini's books. His books are intense and so beautiful.

Thank you for sharing this.

Vivian--It was a wonderful experience! I truly enjoyed it.

Keri--the only problem is, it's easier said than done!