And so today I went to the post office.

First, I had to pack everything up--but I wanted to show you the scope of everything, but the dog didn't want to cooperate.

Fortunately, I've got a HUGE bag that actually fit all the packages in it. I think the bag is actually a TARDIS--bigger on the inside.

And then off to the post office! Now several of you expressed concern that I'd be in line for hours. But no! You are mistaken! My post office is teeny-tiny. Only the last third of the building is the post office. The other two-thirds of the building are actually just store-fronts, I think. They're boarded up. It is, perhaps, a passage to Hogwarts. I must go tap some bricks.


I adore my post office it's really old--with a sign in the front to tell you about it. 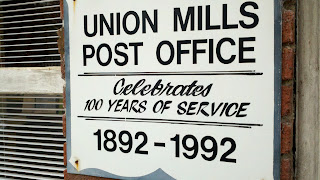 And the inside is tiny and cute, too, with those really old-fashioned PO Boxes (mine is #27). 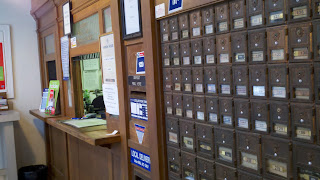 This is the entirety of the post office--I'm standing in the far corner as I take this picture. It's deep enough to support a line of about three or maybe four people in front of the window. I should have taken a picture of the window--it's frosted with old-timey gilt lettering.

And that was my postal adventures for the day! One hour and one hundred packages later, and I left feeling very much like Santa!
Posted by Unknown at 4:02 PM

I am glad you didn't have to stand in line for hours, though.

Oh, I love it! I'm not too far from a small post office either, but it's not nearly as quaint.

I love this, your post office is so cute! Yes, your bag must either be a TARDIS or that nifty bag Mary Poppins had. Glad you didn't have to wait in line for hours, which is never fun. Thanks so much for taking the time to write ever address and mail every package! Happy Holidays, I hope its wonderful!

What a cute post office! :) That's WAY more adorable than my local UPS.

Oh, and I just about died of laughter when I read the TARDIS reference! :D Totally made my day!

I love your post office! I wish I lived in a small town sometimes. =D

Ha, awesome! I want a TARDIS bag! And your dog is an absolute doll. Cheers!

How awesome! I felt like I was right there delivering them with you :) *squee* Hopefully my name was on one of those packages! LOL, thanks Santa!

I adore your post office! In a small town too, but yours is smaller even.

Happy Holidays and congrats to all those getting prizes. Off to check my mail box--okay a bit too soon.

Happy Holidays to you!

Wow, you were busy! And I absolutely love your post office!

That is one intense post office trip! I love small cute post offices. But then again I just love post offices in general. Something so wonderful about the mail. :)

Your post office is CHARMING! That was really so nice of you to mail all of those, Beth. I know the winners will appreciate it. All the same, it's a gift in itself to see such a darling place. =D

I love your doggie! He was trying to be Santa's little helper by holding up the packages and letters for you. Bless the little guy's heart.

I love these picture story posts that you do! They make me feel like I'm reading a Children's book...or something like that?

So fun! You remind me of the tiny town I used to live in the CO mtns - no one in town had mailboxes; we all had to get P.O. boxes and pick up our mail at the office, which was about that big!

Such a cool post office! The one I go to is really boring.

Oh, how I love your little post office! My ship-day was yesterday, and I actually headed away from my little town's post office (which serves a large area and has LONG waits on a normal day) and went to a small, out-of-the-way post office with no lines! :-) Yay! for getting everything shipped in time! :-)

I love your post office! I feel like driving clear across the country just so I can mail something there. ;)
And maybe Hermione spelled your bag so all would fit.

Wow...you just took me back. I used to live in a teeny tiny town almost exactly like that. Same PO Boxes, same counter. Hadn't thought about that for a long time. Wonder if it's still open?

Whoa, I have never seen a post office like that. It's so freakin' awesome. I want one, lol!

I think you live in my old town. It looks exactly like that, lol. Glad you had a speedy trip to the post office.

*runs outside to stalk the mailman*

The photos are so cute. I love small towns and really want to move out of the city the first chance I get! Thanks.

I bet they thought it was like, well, Christmas when you showed up with 100 things to mail! These small post offices don't usually get that much action!

Wow, I thought my post office in my hometown was small...!

I LOVE small post offices. Both the post office near my school and at home are tiny. (Not as small as yours, though.) Few lines, the postmasters know my name, etc.

got my package of goodies on christmas eve!
thank you!! and i'm very glad you didn't stand in line for hours

What an adorable Post office!!! I wonder what the workers there said when they saw all these packages! lol

haha Seems like your dog was so tired from packaging all the prizes you have sent out :). Great post!

I loved your post!! Thank you so much for the giveaway, hopefully I'm one of the winners! Mail from the US to Ecuador takes around 12 to 15 days. So if I'm one of the winners I will have a visit from the mail car this week... if not, it will be just a regular week. Cute post office, here it's just a cold place with yellow boxes. I love mail, too bad we never get anything, it's so exciting. I read the first chapter and I really want to read the rest of it. Thanks again, blessings and success in this brand new year. :)