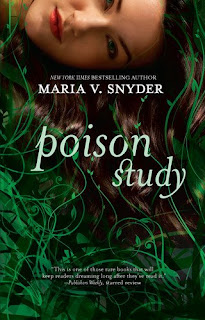 Why I Bought These Books: About a year or so ago, my local indie bookstore held an author event for Maria Snyder. I didn't go. I've been kicking myself ever since. Not only are they fantasy, but they're not epic fantasy, which, frankly, I'm sick to death of. They're crossover between adult and YA, they have a hardcore girl as a protag, and they deal with poison tasters and dangerous magic. What's not to love? Now I've just got to convince my husband to let me buy the third in the series... 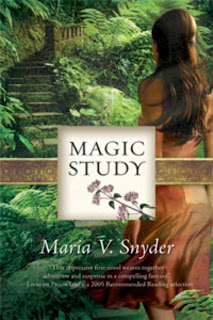 Five Sentence Summary (Poison Study): Yalena's been sentenced to death for killing an important politician's son. The fact that she killed him in self defense doesn't matter. Then Valek, the Commander's assassin and right-hand-man, gives Yalena an option: die now, or risk a slow death as the official poison taster for the Commander. As Yalena learns about food tasting and poisons, she also learns about herself--what happened to her as a child, why she had to kill the politician's son, how far she is willing to go to protect herself now, and just how important Valek will become to her.

Five Sentence Summary (Magic Study): At the end of POISON STUDY, Yalena left Ixia for the Southern land of Sitia. There, she not only begins her training in magic, but she also meet her family--two guilt-ridden parents and a brother who hates her now that she's returned home. She doesn't have time to worry about her family or her new life at the Keep--a murderer is killing off innocent young women in a style way too close to what she experienced in Ixia. As her magic grows, so does the fear of those around her: Yalena just might be a Soulfinder, the most feared sort of magician of all. Is her magic enough to stop the killer, or will it make her as bad as him?

So what can we, as writers, learn from these books?

[As always, highlight for spoilers.]

1. The Gun on the Mantle: "The gun on the mantle" is a sort of foreshadow. If a gun is on the mantle in chapter one, by the end of the book, that gun needs to go off. It's layering in clues of possibility. In POISON STUDY, the gun on the mantle is that Yalena's a poison taster. If you have a story about a poison taster, surely she needs to be poisoned by the end of the book, right? Right. And the scene where it happens, though short, is one that I read over and over...it was well done, surprising, and an excellent twist to the story.Ultimately, Snyder did not disappoint her readers' expectations--and that's the key.

2. Don't be a cliche: Perhaps because I've read too many books in this genre, but I saw the potential for tons of cliche, especially in the second book. They're all spoilers, so, yanno, highlight.

OK, so Yalena falls in love with Valek, in the first book, right? Well, in the second book, Cahill confesses his love for her. Now, in many, many, MANY books, this would be the perfect opportunity for some waffling on Yalena's part: does he love me? Which do I love more? JACOB OR EDWARRRRRD???? Gag. But fortunately, Snyder doesn't fall for that cliche: Yalena tells Cahill to stuff it, she'll be friends with him but nothing more because she loves Valek. It was actually quite comforting to see a real love relationship that wasn't built on lust and actually stood up well to trials.

Additionally, in MAGIC STUDY, the killer's not the cliched killer. Throughout the first half of the book, I expected the killer to be Goel, who Yalena pissed off early on. There was motivation: he wanted to kill Yalena, but couldn't, so was killing other young girls instead. He was the perfect, typical (cliched) bad guy...but he wasn't the serial killer. That really picked the book up for me in the second half, once I realized that the killer *wasn't* the obvious guy. And he wasn't the it-can-be-anyone-but-this-guy guy, either. For a while there, I thought the killer would be Dax--he was just too perfect, yanno? Nope. The killer was some random guy none of them knew. Which really makes sense. How likely is it that a serial killer's going to be someone you know?

End spoilers. As you can tell from that big white chunk, I was really happy that although this book had the potential for cliches, Snyder avoided them.

3. Mixing modern with traditional: Between these books and Kristin Cashore's books, this is what I think the future of fantasy is going to be. In my opinion, epic fantasy is on the way out, and books like this--series of mid-length books in more unique, less LOTR worlds--are on the way in. One thing that both Snyder and Cashore did was include more modern ideas (such as ideas on gender) in a less modern, almost medieval setting. This was both good and bad, IMO:

The Good: This one has the potential for controversy: The Commander is actually a girl, y'all. For reals. Yalena describes him as a girl with a man's soul, a cross dresser so adept at what s/he does that no one suspects the truth. While I can certainly see some people contesting the book on this point, I also think it fits with the story: the Commander would recieve zero respect as a woman, and zero power. Furthermore, I thought that bringing the Commander back in the second book, and Yalena's comment about his souls, fit well with the context of magic.

The Bad: Some of it was a bit too obviously modern-mixed-with-traditional. Take Yalena's parents' home in the second book. The clan lives in tree houses, which is fine, but it comes off as almost a Gilligan's Island with a coconut radio setting. There's an elevator--described as an amazing box pulled up with pulleys--and other details that were too obviously something from the modern world, but made with vines and wood and crap. Thing is: their society is a weird mix of magic and non-magic. Being too shocked by a simple pulley elevator (or an atomizer, or something that is obviously chocolate, just not called chocolate) is kind of pushing it.

4. Delving on the dark side: There are very very dark issues with both books. Rape, murder, and torture...and that's putting it mildly. Snyder's not afraid to go into detail: and it works for the realism of these books.

5. Coincidental: Here's my biggest complaint about the second book: there were two scenes where everyone showed up randomly in a room. In both scenes, Yalena is talking to one person, then another person randomly shows up, then another, and another, and another. It was almost slapstick comedy. In both scenes, one character mentions something along the lines of "Hey! What a coincidence! This is crazy, man." But it just didn't work for me, especially after it happened the second time. People shouldn't just show up because it progresses the plot. There should be a reason for such coincidental meetings.

Quibbles: My biggest quibbles are with the coincidental meetings I just mentioned, which indicates a somewhat more serious problem that Snyder doesn't quite betray, but certainly dances around. Quite a few times, events happened in the book that were almost too convenient. It was almost a little too much as if Snyder was setting the characters up for the script rather than following their logical motivations and actions. It wasn't bad, but there were a few times that made me sigh.

The Final Word: These are addictive books. If you need no other evidence, then take this: I stayed up well into the night to finish both books, an honor that was last bestoyed on Harry Potter.
Posted by Unknown at 4:20 AM

You had me at addictive...
"These are addictive books. If you need no other evidence, then take this: I stayed up well into the night to finish both books, an honor that was last bestoyed on Harry Potter."

Seriously, even if you posted just this last sentence I would have wanted to read this series! Thanks for the detailed review, I'm definitely putting them on my list.

I really enjoyed the study series even though they made me blush. Have you read the last book, Fire Study? That explains more about the commander. It's a twist, but a logical one.

Like you, it also frustrates me when I read about a traumatic event and it somehow gets lost in the story. Ugh!!! Why even bother including it? I've not heard of this series, but you've made me want to pick it up.

Yay! There are some flaws in the text, but overall, I've found myself hooked on her style...and totally plan on starting her next series as soon as they come out in paperback!

Danyelle: I JUST ordered Fire Study on Saturday. I think I've got an idea about the Commander and I'm really hoping that she explores that. I felt like there was a pretty big hint about the Commander at the end of book 2 (the thing about 2 souls) and I had my fingers crossed that would be discussed.

You read the Snyder books, I do hear they are good. But that slapstick act sounds rather annoying.
Still would love to read these, I can't believe I saw them last year in the book store and thought what lovely covers but didn't by them

She explores it a bit, but not until the end. >.< But still, some resolution is better then none, yes? :D

Blodeuedd: They are good, and that slapstick bit was only for a few pages--still definitely worth the read.

I'm with you...I'm not sure about the YA label. True, the main character is younger (not a kid, but upper teens--was it 19? Something like that) But she does not ACT younger--and the themes are VERY dark. Personally, I think that since it's not epic fantasy, they had to label it as SOMETHING, so just tagged it as YA.

Danyelle: Oooo...I will let you know what I think when I finish. Hope I get them by this weekend!