Interview + Giveaway with Amy Spalding, Author of INK IS THICKER THAN WATER

Today I'm so pleased to feature the delightful, the funny, the friendly, the awesome AMY SPALDING! Author of THE REESE MALCOLM LIST and INK IS THICKER THAN WATER, Amy is an amazing contemp author that you should definitely have your sights on.

Check out her interview below, and don't forget to enter the contest for a free copy of her latest book!

We can read all about your life from your bio in the jacket flap of your book. So, what's a completely random fact about you that most people don't know?
Once I was dining at a Cracker Barrel in Kentucky, and a waitress told me I looked like someone famous. Obviously I was very flattered, even though she couldn’t figure out whom for nearly the entire meal. But then she announced she’d solved the riddle: “You look like a cartoon bear!” Thank you?

As a kid, what was your favorite book? Have your tastes changed since growing up?
Some of my favorite books growing up were two series: Betsy Tacy by Maud Hart Lovelace, and The Babysitters Club by Ann M. Martin. Both were about tight groups of friends just dealing with each other, their friends, and—to some extent—boys. The book from my childhood that remains a favorite to this day is A Summer to Die by Lois Lowry. I recommend it to everyone.

I think my tastes have stayed fairly consistent, actually, though these days I’ve really gotten into nonfiction as well, which was never a love growing up. I just went through a phase of reading a bunch about cults and other creepy groups of people.

In your book, THE REECE MALCOM LIST, Devan’s mother Reece is a NY Times Bestselling author. Did you slip in any writer quirks that you have in her character?
The funny thing is I didn’t think “make her seem like a writer”, I mainly thought, “make her seem intimidating and standoffish”—but it turns out? Someone who holes away in an office and doesn’t always like to talk to other people? Kiiiiiinda seems like a lot of writers. Also, of course, her favorite beverages are coffee and bourbon.

Beth's note: The beverage choice is an excellent point. 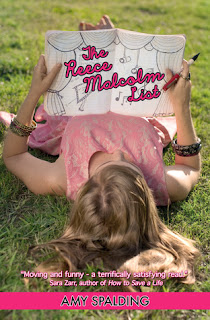 It's the inevitable question: what inspired THE REECE MALCOM LIST and INK IS THICKER THAN WATER?
For The Reece Malcolm List, I’d always been obsessed with long-lost family stories, so I thought if I really wanted to read my ideal one, I should just write my own. I loved the idea of Reece being someone Devan would have already heard of, which is why I made her a bestselling author. Since I wanted Devan to have something she was incredibly gifted at that had nothing to do with her mother’s talent, I ended up making her killer at show choir and musical theatre.

For Ink Is Thicker than Water, I was reading a lot and thinking about how many books are about something really dramatic shifting in one’s life. But a lot of what I’d gone through as a teenager, and even then as an adult, was how often life shifts around you, and you have to figure out how you stay afloat.

One of the things that stood out to me in both your novels was the way the families were not the traditional nuclear family of mom, dad, and 2.5 kids. Can you talk a little more about the way you portray such realistic families?
Since with Reece my goal was to write about long-lost family, I knew I obviously wouldn’t be writing a typical family. But I didn’t approach writing Devan, her mom, and her mom’s boyfriend (or the memory of her dad and stepmother) as THIS FAMILY IS VERY DIFFERENT! I just focused on who each character was and therefore how they related to one another. The family is really being built in the book; and Devan and Reece really don’t have a guideline for how it should look—or at least a guideline they’re comfortable with. So their family dynamic grew out of how they and Brad, Reece’s boyfriend, assembled it.

With Ink, it’s funny to me how on one hand it’s definitely NOT a nuclear family. Kellie’s parents are divorced. Her mom is remarried, and with her new husband has a young son. Her dad has a girlfriend, though not one he’s very open about. Also, Kellie’s older sister was adopted. Aaaaand Kellie’s mom and stepdad own a tattoo shop.

But on the other hand, they actually conform to a lot of really traditional family notions. Kellie’s mom is obsessed with her, her husband, and the kids all eating as family. The kids are just siblings; there’s no emphasis on Sara’s adoption or Finn technically being a half-brother. And even after a divorce, clearly both parents want the best for both of their kids. 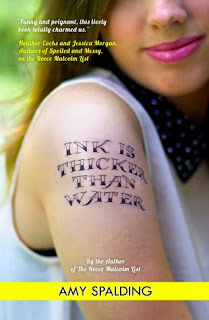 Can you tell us a little bit about the process--particularly the timeline--of writing & publishing your books?
I wrote Reece many, many years ago. It was kind of awful; the characters were there but there wasn’t really a plot—just stuff happening. (Apparently that’s not the same!) I worked hard on consuming a lot of YA, and reading agent/editor blogs, and decided to write something new. That became Ink. I felt pretty confident about it, so I began querying agents. This was toward the end of 2008. I had to go through a round of revisions based off of an agent’s notes, and by early 2009 I’d completed those revisions and resubmitted to the agents who were interested. My current agent Kate Testerman was one of those who offered, and after a lot of research, I signed with her.

After revising a bit, Ink was submitted to many editors. It came very close to selling, but paranormal romance was the trend then, and it was hard to break through with contemporary realistic. In the meantime, I wrote Reece AGAIN! But this time I sort of knew what I was doing. My agent liked it, and after Ink didn’t sell, we went out with Reece.

It had a similar pattern, and honestly I was incredibly frustrated and depressed about the entire situation. My rejections were lovely. People really liked the books. They just didn’t think the marketplace was right to publish it.

In 2011, I began work on my third book (I’d worked on some others in the meantime, but nothing had really gelled), and I decided to go in a different direction. Instead of another family drama—which I loved—I decided to try writing a romantic comedy. I decided to try not to worry about the publishing industry, and just write something that took me out of my writing-related depression. And it worked! Kissing Ted Callahan (And Other Guys) is maybe the most fun I’ve ever had first-drafting a novel.

But before I could finish revising it? In early 2012, Reece and Ink both sold! At that point I’d really given up, so it was a really pleasant shock.

So this means I started writing really seriously in 2008, got an agent in 2009…and my first book came out in 2013. I am not naturally a patient person, but I’ve really learned to be.

If your reader could only take away one emotion, theme, or idea from INK IS THICKER THAN WATER, what would you want it to be?
Don’t be afraid of change!

What's the most surprising thing you've learned since becoming a writer?
I think I thought at a certain point it would get easier, but most of it doesn’t. First-drafting is still hard. Revising is still brainfully painful. Editorial letters are still a little scary to read. Releasing a book into the wild is terrifying. But also hearing from people who love your books? Amazing and special each time.

Beyond the typical--never give up, believe in yourself--what would be the single best advice you'd like to give another writer?
BE PATIENT! I am proof that this business can take forever. It will happen when it happens. It will be better because the timing lines up. Don’t worry about how old you are as a debut author. I am the age of decaying dust picked up by an ancient breeze, and it hasn’t hurt me at all.

What do you think are your strongest and weakest points in writing?
Weakest for me is definitely the middle of my books. Every single one, I’ve had to rip apart and restructure, because I struggle moving forward, finding a momentum, getting to a climax. I just kinda let stuff happen. Luckily I’ve worked with great editors who spot this and get me on the right path.

As far as strongest, for me it’s my dialogue. I love writing dialogue, and I love making myself laugh or cry at what my characters say (or don’t say) to each other.

Amy Spalding is also the author of The Reece Malcolm List. She grew up in St. Louis and now lives in Los Angeles with two cats and a dog. She works in marketing and does a lot of improv. Visit Amy’s website  www.theamyspalding.com or on Twitter @theames.


AND NOW FOR THE GIVEAWAY!
To enter, just fill out the Rafflecopter below (or follow this link). One winner will get a copy of INK IS THICKER THAN WATER. Open internationally, wherever the book will ship via Book Depository.