I'm currently in sunny Las Vegas for the NCTE/ALAN conference, and I have the privilege to be staying at the Bellagio, famous for the fountains that go off in time with music (which, ironically enough, my room faces away from and I have yet to see!). I've never stayed at a classy casino before. Once, in college, I and a group of friends all split a room at Circus, Circus, but it wasn't exactly classy.

Anyway, I went exploring the casino today, and discovered that there's actually rather a lot of art at the Bellagio, something I'd never known before. They have a theater for Cirque du Soliel (which I'm seeing tonight! With Marie Lu! SQUEE!) and right beside it is a gallery of art inspired by the performances by sculpter Richard MacDonald. 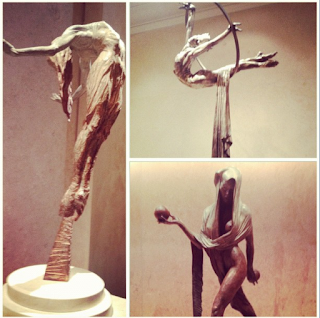 It was stunning, and I'm so glad I got to see it before the performance. It really gave me an appreciation of the body as art.

The Bellagio also had a fine art gallery (another surprise!) and from now until January 6, they're displaying a Monet exhibit. I had to go--not just because I like art and Monet, but because the star of the show was this painting: 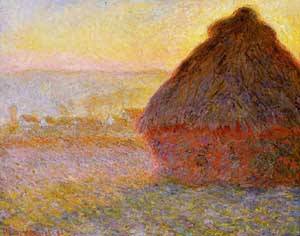 If you've read Across the Universe, you might recognize this beauty, Grainstacks at Sunset. When Elder sees Amy for the first time, frozen in ice, he thinks:


It's her hair that pulls me forward. It's so red. I've never seen red hair before, not outside of pictures, and the pictures never caught the vivacity of these burnished strands tangled in the ice. Harley has a book of paintings he stole from the Recorder Hall, and one of the paintings is just a series of haystacks at different times of the day. He showed me the last painted haystack, the one covered in snow, the one at sunset. Harley went loons over it, saying how the artist was so brilliant to paint stuff with different light...

This was the painting I was thinking of when I wrote that passage. And today I got to see it in real life.*

I love art. And I love seeing the real thing, not just a print or an image on a screen. It was surreal getting to see this painting just as the last book of the trilogy is being printed. I won't lie: I got a little teary.

Especially because, for the first time in my life, I could see the real detail of this painting. I had no idea the paint was so thick. I wonder if he gobbed the paint on, or if it just accumulated brushstroke after brushstroke. I've always thought that the colors in most impressionist works was just a sort of playful bit to add to the painting--throw in a spot of bright red or blue or gold, just for effect. But seeing it in real life made me realize why each color was important, the role the bright plays in the muted.

There are tiny little lines of red and yellow around the edges of the haystack that make it feel like light, real light. The docent at the museum gave a little speech about this piece, and he mentioned that to Monet, the subject of the painting wasn't a haystack, but was light itself. I can understand that now, seeing it in person. The light is the most visceral thing in the whole painting.

There's no real point to this post except maybe this: whenever you can, find art.

-----
*You might notice that there's no snow in this painting, but I mention it in the quote. There are snow-covered haystacks in the collection by Monet, but the painting I was referring to was actually this one. Having never seen it in real life and after looking at dozens of images by Monet, including the snow-covered ones, I mistook the paler spots on the ground as snow.
Posted by Unknown at 7:40 PM

Sometimes Monet used a palette knife instead of a brush, so yeah, just gob that paint right on up there. Impressionists today often use the same style depending on what they're after.

If you go up the "Eifel Tower" at night you can watch the water show in all it's lighty shinny glory from above. It is amazing

I love those fountains, hope you get to see them! Have fun.

sounds great, hope you're having a great time. have to agree, art can be so inspirational and can be found almost anywhere on your travels :)