Ray Bradbury & His Gift of Hope 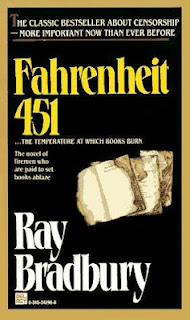 I think it was Ray Bradbury's book, Fahrenheit 451, that taught me that the world isn't fair.


I was in high school when I read it, I believe. For a class. I can't remember which class or even what grade I was in, but I remember reading it at one of those hard-seated student desks my high school used. And, later, discussing it with the class.


I remember being so angry that the characters in this book lived in a world that just wasn't fair. It wasn't right that they were censored and controlled by the government. It wasn't fair.


And yet--despite living in a world that was supremely unjust--some of the characters fought back.


This was hugely influential to me and my attitude about stories and writing. My mother is a big believer in happily ever after, but I've found that the stories I like best are the ones like Fahrenheit 451--the world isn't fair, and the characters can't truly escape it...but they fight anyway.


Much later--only a few years ago, actually--someone mentioned that their favorite short story was "All Summer in a Day" by Ray Bradbury. At the time, I'd never heard of that story before, so I quickly went online, found a copy, and read.

"All Summer in a Day" has many of the same themes of an unjust world as Fahrenheit 451--in it, a group of children live in a colony on Venus, a planet where, due to clouds and rain, you can only see the sun once a year. This story is about hope--and how easily it can be crushed and taken away. I won't ruin the story for you--it's short, and you can easily find it online. Read it.

"All Summer in a Day" and Fahrenheit 451 are very dark. They are sad. They do not end happily ever after. In particular, "All Summer in a Day" speaks of cruelty--even at the hands of our peers--and the ceaseless darkness in any person's heart, even the heart of a child.

And yet despite all this--Ray Bradbury's works give me hope.


I've said before how to me, dystopians are not depressing books. They're books of hope. They're books that say even when things are at their darkest, there is still a glimmer of light.


Ray Bradbury was the first person to teach me that.


This is an incredibly important lesson for anyone to learn. I am grateful that Bradbury's works helped me to see early on that even when the world isn't fair--and it never is, no matter what our childish hearts might want--it is still worth saving.


When I read about Ray Bradbury's passing this morning, that was the thought I was left with: here is a great man, who has left the world a brighter place than it once was. Thank you.

His work is so full of passion: you can't read Bradbury and not ignite something in yourself. Thanks for posting your tribute...he is missed.

I love Bradbury's writing as well because no matter how dark it was (and I did appreciate the dark), there was always a glimmer of hope, something to strive for or believe or admire. I read both those pieces for school (the short story and Fahrenheit), but it wasn't until I read From the Dust Returned and the Illustrated Man that I fell head over heels in love with his writing. The scope of his imagination and the poetry of his prose left me breathless, and goodness, the man knew how to evoke emotion and pluck heartstrings. He let me live those dog-days of summer.

Thanks for this post and for sharing your love for a great writer. :)

When I was nine, I saw the short film of "All Summer In A Day," and I remember thinking back then that if he could write something that made me feel so many different emotions, I had to find and read all of his works. (That may also have been the start of my love for short stories, too, now that I think about it.) And yes, some were dark, and yes, some seemed futile, but I loved his imagination and the worlds he created.

Thank you for sharing your experience, too.

As more damage you will made as more high score Truck Games Online Squidoo : Welcome to Squidoo Race to the end of each track in your monster truck, crushing everything in Cool Math Games 4 Kids The Number Monster (online practice for