Here are some things you might not know about me:


So, when I saw that Rebecca was holding a contest for a custom-made My Little Pony based on a character of a novel, I just had to jump on that band wagon!

The only problem? I couldn't decide which of my characters would make the best pony! So I made THREE using this really fun pony-maker. 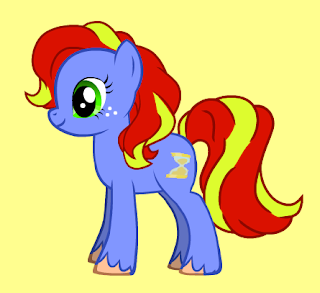 Amy Pony!
Type of pony: Earth Pony--because as much as she wants to fly away,
she's stuck on the ground ship
Body type: short
Body Color: blue, for the sky she misses
Eye color: bright bottle green, just like the real Amy
Mane and tail: red and gold, just like the real Amy
Cutie-mark: an hourglass, to symbolize how she's out of time
Note: yup, that's the same hourglass of Doctor Whooves
Other details: freckles, to symbolize her fair complexion,
and shoes, because she's a runner! 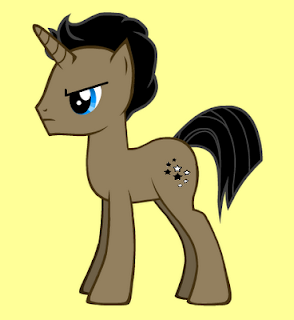 Elder Pony!
Type of pony: Unicorn, because he's the leader
Body type: tall
Body color: dark brown, just like his real skin
Eye color: blue, like the sky he longs for
Mane and tail: black, like the real Elder
Cutie-mark: a series of stars, because once he sees them, he can never be the same
Other details: I gave him a stern expression, to show how he's trying to be a leader 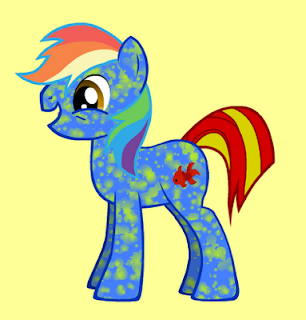 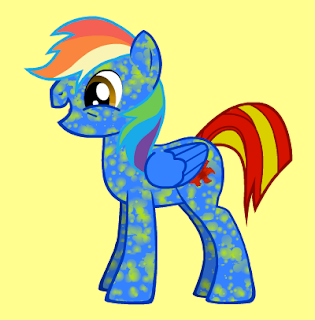 Harley Pony!
Type of pony: Pegasus--he wants to fly through the stars
(I did a screenshot without the wings, though, so you could see his cutie mark)
Body type: average
Body color: blue and yellow spatters--like the sea and the stars at the same time
Eye color: gold, to represent his heart of gold
Mane and tail: What I really wanted was a rainbow colored mane and tail, like Rainbow Dash has. BUT I couldn't do that in the generator, and I was too lazy to edit it in Gimp
Update! Thanks to @literaticat, I was able to give Harley a rainbow mane!
Cutie-mark: A koi fish, of course
Other details: Of course Harley would be laughing!

What do you think? I know it's silly, but I had so much fun doing this! If you have a character you would like pony-ize, then go to this website for a pony generator, and don't forget to enter Rebecca's contest yourself!

Speaking of, I have to pick ONE pony to enter into the contest...but I can't decide which. Which one is your favorite?

OMG! I LOLed so hard over your Elder Pony. I love him, I want him to be mine. Him and his grumpy face.

I LOVE THE HARLEY PONIE!!!!

I had to pick Harley as my fave because as soon as I saw him, I knew who he was. You really captured him, I think.

Love your ponies! I picked Harley (even though I detest Rainbow Dash thanks to my 6yo daughter's talking one *that doesn't turn off*) because I knew it was him right away and I loved the koi fish. Not that Amy and Elder aren't awesome... Where's Eldest though? He would make a rockin' MLP!

I LOVE THIS! =OOO
thank you for the big smile on my face.
Have a nice day too!

The voting was extra fun!!!!

I actually still get My Littly Pony's for Christmas. It's a joke between me and my sister!!! I've now grown to love it! I don't know what I'd do if I never got another one!!

Amazing how fascinating anything other than writing can become when you really should be writing. :-)

I must say, I voted for Harley... but I do LOVE the Elder one too! Love them both! Can it be a set? LOL

Oh, the hours I could spend on that website. Thanks for sharing! And I voted for Harley. =)

I voted for Elder.

I enjoy being a parent because I have an excuse to play with kid toys again. Too much fun.

Harley pony is such a cutie! And even with his serious face, Elder's still adorable ;)

I love My Little Pony, still have the DVDs/VHS and toys somewhere. And these are brilliant! I think Harley might be my favourite, but I love them all.

Love them! I voted for Harley because I think that one would look great as a custom.

The Amy pony is by far my favorite. It's so spunky, just like Amy.