The Problem with Recommending Books

I have a hard time recommending books.
Because here's the thing. We all like books for different reasons. And that makes it all but impossible to accurately recommend one book to someone else. I've found this is especially difficult for me because, well, I like a lot of books for a lot of different reasons. I read MG to YA to adult (sometimes), sci fi to contemporary, fantasy and romance and magic realism and everything in between.
Let me give you an example. One of my favorite books is THE FOREST OF HANDS AND TEETH by Carrie Ryan. After I read it, I pressed it into the hands of all my friends and forced them to read it. Many of them (like me) loved it. And they asked what they should read next.
The obvious choice is to look at the plot--at it's very basic form, THE FOREST OF HANDS AND TEETH is a zombie book. So, makes sense to recommend another zombie book, right? Like Carrie Harris's (just released!) new title, BAD TASTE IN BOYS.
Side note: What is WITH Carries and zombies?!
But....a book is more than one thing. THE FOREST OF HANDS AND TEETH is more than zombies (and so, btw, is BAD TASTE IN BOYS). 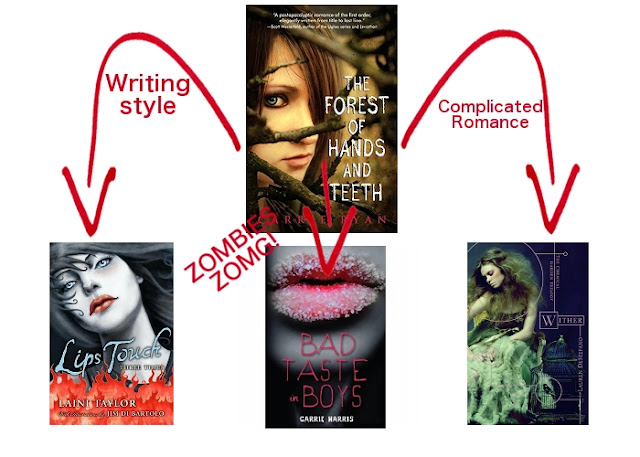 Let's say you loved it for the writing style--it was lyrical and beautiful and every word was like poetry. In that case, you should pick up LIPS TOUCH: THREE TIMES by Laini Taylor--another beautifully written book whose prose sings. There's not a zombie in it, but if you're like me, you'll love both books anyway.

But maybe you don't care so much about writing style OR zombies. Maybe the thing YOU liked in THE FOREST OF HANDS AND TEETH was the complicated romance. You liked the love triangle built on difficult situations, the complicated society that constructed a situation where love is a luxury most people can't afford. In that case, you will want to read Lauren DeStefano's WITHER.

WITHER, BAD TASTE IN BOYS, and LIPS TOUCH are three very very different books--but each one is a possible recommendation for someone to read after reading THE FOREST OF HANDS AND TEETH.

And therein lies the problem with recommending books. Unless you know why someone liked one book, it's difficult to really recommend another book based on it.

Things get even more complicated when you bring into account the idea that some people like--or dislike--a book for very personal reasons. I, personally, have heard from several people that they didn't like sci fi and the only reason they bought my book was because it was titled after their fave Beatles's song, "Across the Universe." For personal reasons of my own, I never read books about angels (fallen or otherwise) or where I know the plot relies on sibling death. My husband likes books where there's a terrible, tragic ending--my mom likes the exact opposite.

The truth of the matter is, there will NEVER be ANY book where everyone loves everything about it. And it's difficult to recommend a book to someone based on another title if you don't know why that person likes the book--writing style, subject matter, plot, or characters. There are, quite simply, just too many variables for every recommendation to work.

That said--I'm going to post tomorrow some books that I think are pretty comparable--a sort of, "if you like this, you'll probably like this." It won't be perfect--but I hope it'll make you think of some new titles to read!
Posted by Unknown at 11:52 PM

Beth, I think you're exactly right.

Recommending books can be hard, because people can like the same book for many different reasons (like you said).

I noticed that when I was reading and reviewing an ARC of a self-published book.. it had some similarities to other story lines but yet it was still it's own. And I knew at the same time that not everyone who liked the similar books would like this one (and vice versa).

-Brenna from Ever After Esther

HA! I just started a recommend feature on my blog tonight (oh the irony!) and although my feature is a bit different I agree with you!

At the same time highlighting books that authors you admire like is a good way to spread the love and bring attention to some books.

I was saying something along these lines earlier today! Funny how things can line up.

Also, I'm coming to your event in Asheville on 4th August, and I can't wait to meet you!

Yep, recs are tough - this is why I started asking people what books they hated as well as what they liked. I've found it's a lot easier to gage once I have both sets of info. Even then, it's still hit or miss.

Isn't that the truth? Quite often you have to chalk up criticism as a matter of taste. As a reader, I very rarely hate a book. I don't connect with the characters. I roll my eyes at the plot. I may even grow tired of the prepositional phrases, but that doesn't mean it's not a good book.

I love your flowchart! Can I print it and hang it in the YA section at my store??

And I know what you mean about not reading books for personal reasons. I had such a negative reaction to a popular YA book about a year and a half ago because it reminded me of one of the worst experiences of my life. That doesn't make the writer or the book "bad," quite the contrary, but I doubt I'll ever read anything by her again.

Yes. Exactly. Although I have no problem at all recommending your book to anyone. In fact, I haven't seen my copy since January when I lent it out.

It's been making the rounds.

I hope it comes back someday. I'd like to read it again.

I have no problem recommending books. While there indeed area a plethora of reader preferences and aversions, I think that book recommendations, when well articulated can help potential readers sift through all the choices that we have in books, especially now that there are sooooo many self-published authors too. Nobody wants to pick up a book that's poorly written even if it is their favorite genre, has a catchy title, or includes their favorite element. Book recommendations are so important! I look forward to reading yours when posted!