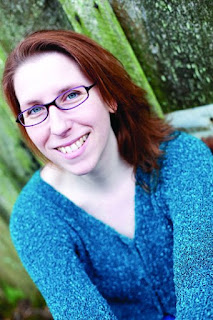 Yesterday, I reviewed Janice Hardy's excellent MG debut, THE SHIFTER. Janice graciously agreed to do an interview, and here it is! Thanks so much, Janice!

We can all read about your bio from the back of your book or your FAQ online. So, what's a completely random fact about you that most people don't know?

I have pointed ears. Not full-on elf pointed, but enough that I think there might be an elf in my family tree somewhere.

As a child, what was your favorite book? Have your tastes changed since growing up?

My favorite book was THE SECRET GARDEN, and still remains one of my all time faves. My tastes have changed, but I still love science fiction and fantasy just as much as always. I find myself being drawn more to great characters with great problems as I get older.

As a child, what did you want to be when you grew up?

A writer actually (grin), but I also really wanted to be an archaeologist.

How much of you is in your book? Is there a character like you? Is a situation in the book derived from real life?

I think a lot of me is in the book on some level, since everything comes from my imagination and my life experiences. But there's nothing specifically me or anything in my life in there. No, "Oh, that character was based on Uncle Bob" or anything. I draw from everywhere to create my stories, and the weirdest things can inspire me in the strangest ways. I think all the characters have bits of me in them, even if it's exaggerated for the story. Nya has my impulsiveness, and my ability (or fault?) to dive in without thinking, but thankfully I'm not as bad as she is. Aylin has my go with the flow attitude. Tali has my idealism. Danello my pessimism when I'm having a bad day. And, the bad guys always tap into my evil dark side.

What was your timeline for the book? How long did it take to write, revise, submit, and finally, get published? How did you feel at these stages?

I got the original idea about six years ago, and I wrote a terrible outline and then stuck it in a drawer. Totally forgot about it. Then a few years ago I went to a conference (Surrey International Writers Conference) where they stressed original ideas. That was the end of October 2006. I came home, dug through my old ideas to see if I had anything fresh, and found the old outline. It was still terrible, but the core idea of pain shifting stuck with me. I started planning and world building, and began the novel in January, and finished it around June. Then revised a bunch of times. I started submitting it to agents in mid-September, and signed with my agent on Halloween. (I pitched her at the next Surrey, actually). We did a few months of edits and tweaks, and she started submitting it to editors the end of May. We sold it the end of June. So that's what? A year to write and get an agent, eight months to revise and sell. And then fifteen months until it hit the shelves (which is actually pretty fast). Wow, almost three years from when I started writing to when it released.

The Shifter was an astonishingly easy book to write. If I hadn't had three other novels rotting in a drawer I'd have thought this whole writing thing was easy. I knew after a few chapters that I had something special, which felt great, and a little nerve wracking. I had always done third person before, but Nya just spoke to me in first. First person had always scared me a little, because it can be a hard POV to write in, but I found out it's where my strengths lie. I was hyper nervous when I started submitting, because I knew this was the best book I'd ever done. Rejections were going to be extra hard since I felt so good about it. And if I couldn't sell this one, how could I ever do better? Luckily, even my rejections were positive, and I got multiple requests, which really helped my confidence. I knew even if it got rejected, I'd taken an important step forward as a writer. I was at least writing on a professional level, even if they ended up hating the story.

Getting my agent was thrilling and wonderful and scary. Having an agent like your work is such a validation that you really can do this. And she brought great ideas to make the book even better, so I learned a lot working with her. Same with my editor. Selling my novel was amazing, and fulfilling. No matter what else happened, I'd sold a real novel! I'd proven to myself I could do it. It's surreal to have a professional gush about your work and telling you all the things she loved about your book. Every writer should have this experience once in their lives, LOL.And then there's seeing your book on the shelves. There's no comparison. It's a spectacular feeling. Every time I go into a bookstore I have to take a picture. I have a whole collection now, and even my friends send them to me.

It's an emotional roller coaster for sure. Huge highs and lows. Even after I sold my book, I still had the doubts I had before. Was I a one-book wonder? Could I do this again? What if no one liked my book and it failed? Then there's the good stuff, like getting great reviews and having readers email you to say they just finished the book and loved it. Those make it all worth it.

If your reader could only take away one emotion, theme, or idea from the book, what would you want that to be?

My whole goal in writing is to tell great stories, so I don't need readers to take anything more than "what a great story" away from it. But I'd love for them to have a sense of wonder, or that rush you get when you read something that jazzes you up. As for a theme, hmmm...maybe that everyone has reasons for doing things we don't know about, so give the benefit of the doubt when you can (grin).

I hope to keep writing and selling books. I'd love to be able to write full time in five years, maybe have a bestseller (or two) in ten, and be well known in fifteen. I don't think I want to be super famous, (that would be scary) but it would be really awesome if people knew my books and characters, even if they didn't read the genre or know my name.

I assume you mean published writer? I think how much of a team effort getting a book to the shelves is. Everything is so interconnected, from the writer, to the agent, the editors, the sales and marketing team, the booksellers. There's the notion that you sell your book to "a publisher" and you're done, but so much more happens, and so many people work so hard to get that book out. It can be a little intimidating, because it's your baby and you want control, but it's also comforting to know folks are working hard to make your dream come true. Sure, maybe they're just doing their jobs, but those jobs are often their dreams, and they're just as excited as you are.


Beyond the typical—never give up, believe in yourself—what would be the single best advice you'd like to give to an aspiring author?

Read a lot, write a lot. It's the only way to improve.

What do you consider to be your strongest talent in writing? Your weakest?

Plotting. I'm rarely at a loss for what to do next, even if it's not my story (I brainstorm with writing buddies a lot). Granted, that "next" isn't always great, but it's easy to toss that aside and try something new. Weakest... a friend of mine would say description since I usually skimp on that until forced to add more, but characterization is something I've struggled with. My best friend has really helped me with that over the years, (she's awesome at it) and has pushed me to get into my characters' heads and get to know them. It doesn't come naturally to me, and something I know I have to go back and work at after I'm done with a scene.

What's a writing pet peeve that you have?

Words used incorrectly. Like "peruse," which means to study in detail, or with great care, is often used to mean "skim." There are a handful of words like that I see all the time and it always drives me nuts. It probably shouldn't since I'm sure I made the same mistakes until I learned they were wrong, but I can't help it. (grin).

What a great interview. I loved hearing about Janice's writing process and how critical a unique idea is. Thank you both!

Super interview Beth. You must be feeling better??

Thank you Janice. I enjoyed reading. Especially the part about the journey, the highs and lows. Wondering if anyone would read the book. I imagine all writers go through that. I'm sure I will when my time comes. Thanks again. :-)

What a great interview! I can't wait to read this book!

Fantastic interview. And what a great reminder that publishing isn't a lightning fast industry. Patience, I must have.

Thanks Beth and Janice! And Janice, I totally agree with your pet peeve!

Wow!
This was an awesome interview. I loved the indepth responses to your questions that Janice gave. Thank you very much to her for sharing!
Is Janice on Twitter?
:)

Patience? What's that? Patience is a life skill God seems determined to teach me by providing lots of practice! Great interview - thanks to both of you! :-)

Thanks for the great interview. It gave me hope that you struggled with characterization & description as I struggle with them too. But you'd never know you do from your book, which is so good. I really recommend Janice's blog too. She has a lot of great posts on the writing process.

Great interview, and also Janice Hardy has great advice on structure at her blog.

Her book's not my usual genre, but I'm going to check it out now.

I loved Shifter and it was heartening to hear that Janice had already written three other novels before getting an agent and selling this wonderful book. Never give up.