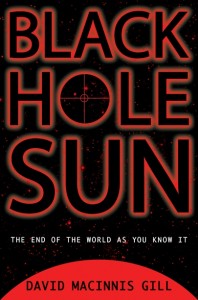 I recently finished reading BLACK HOLE SUN by David MacInnis Gill. My students ADORED his first novel, SOUL ENCHILADA--his Skype visit to our classroom was one of the highlights of the year, so I knew that I had to read his next one no matter what, for several reasons. (1) My students idolize him. (2) This is a YA sci fi! SCI FI!!! We needs more of that! and (3) People have compared this book to my all-time, forever and ever fave: Firefly.

So when I finally broke down and bought an e-reader, I thought, how apropos: my first ebook purchase will be a sci fi!

Recently I stalked asked David some questions abut his book, and here's what he said:

We can all read about your bio from the back of your book or your FAQ online. So, what's a completely random fact about you that most people don't know?


My father was a housepainter, and I started working with him when I was six years old. I’m pretty handy with a paint roller. 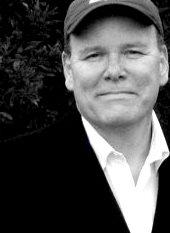 As a child, what was your favorite book? Have your tastes changed since growing up?

Where the Wild Things Are was my hands-down favorite, ever since my first grade teacher read it aloud. Either I’m very consistent or I’m very rigid, because I still look for the same things in a book—an engaging premise, conflict, fantastical elements, relationships, monsters, beautiful language, and pounds and pounds of yearning.

What are some of your fave sci fi novels, tv shows, or movies?

In BLACK HOLE SUN, Durango and his friends curse and converse in various different languages. Why did you decide to go that route?


My editor, Virginia Duncan, made that happen. The manuscript didn’t have much cursing, and she kept saying something like, they’re soldiers and all they say is darn? Also, there was a throw-away line from Durango about being able to speak three languages and curse in seven. She seized on that and had me looking up cuss words in every language I could find. German and Chinese are the most commonly used because they have the juiciest expletives.

One thing I've talked about a lot on the League is "future speak," or using new words to describe new tech. In your world, there's symbiarmor, armalites, and more. Can you tell us a little bit about how you came up with the words themselves, as well as the tech?


Symbiarmor is a portmanteau of ‘symbiont’ and ‘armor.’ The idea originated with a magazine article about bioadaptive cloth whose molecules could be rearranged from body feedback. I added nanobots that have a symbiotic relationship with the cloth and the wearer, and voila. The other words followed a similar path.

I see that you're working on a sequel, INVISIBLE SUN. Is there *anything* you can tell us about it?


I’m on the last big round of revisions, does that count? No? Well, it will be out early 2012, and it features Durango and Vienne in their quest to find out more about the secret project that created the Draeu. It’s set near the equator now, near Durango’s boyhood home. You get to find out more about Durango’s family—and Vienne’s, as well. Lots of skeletons in both their closets.

If your reader could only take away one emotion, theme, or idea from the book, what would you want that to be?

What's the most surprising thing you've learned since becoming a writer?
That I love revision! Really! My least favorite thing is writing a first draft. I love diving back into a story and finding its heart.

Beyond the typical—never give up, believe in yourself—what would be the single best advice you'd like to give to an aspiring author?


Never give up! Oh wait….How about, don’t judge your success by comparing yourself to others because there is always someone who writes better, sells better, or reads better. Set goals for yourself and tell the story that only you can tell.

What do you consider to be your strongest talent in writing? Your weakest?

What's a writing pet peeve that you have?


Check out the other Bookanistas today!

What can I say? You had me at Firefly! Also, the title of this book is made of win - are you a Soundgarden fan or is it coincidental? Or maybe I'm completely dense and there's an ACTUAL phenomenon called a black hole sun? Huh, I guess I might have to read it to find out!

Really enjoyed this interview and look forward to getting my hands on the book!

Great interview. I always love learning how authors create new words for things they create in their world. And David's advice to us aspiring authors is right on. Looking forward to reading this.

What a great interview, Beth! I also hate the use of participles like that! It's sort of like sentences that start with "As", linking two actions as if they were being done at the same time when they often aren't.

Love the idea of cursing in different languages! One of my fave things to do ;)

Copy official bankruptcy papers
https://www.bankruptcylive.com/success-stories/
I am extremely pleased with this service. The representative was very cordial, and I received all of my documents in less than an hour. I would highly recommend this service to others.

Cant wait to read Black Hole Sun, but I'm gonna disagree with you on semicolons. I think they're kinda cute, but maybe that's because they're one half of a winky face ;)

I once had an SOLE ENCHILADA, dang yummy, too.