A Sneak Peek at the Prizes!

Prizes. More than one prize. Multiple in the prize department.
Well, first there's going to be a grand prize, which will consist of two things. The first is an ARC of A MILLION SUNS (which will be delivered to the winner as soon as, er, they're delivered to me). The second part of the grand prize is this: 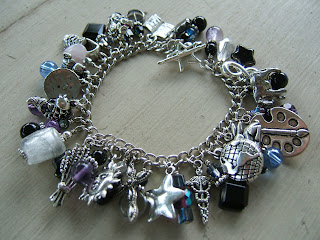 I've blogged before about how I contacted this awesome Etsy artist, Jennie, and we started working on a bracelet that's just for ACROSS THE UNIVERSE. We worked together over every. Single. Charm. And dude. There's nearly 20 charms on this sucker! And each and every one has a special meaning.
For a full list of the charms, plus details of how the bracelet was made, check out Jennie's blog!
There's just so much detail in this! 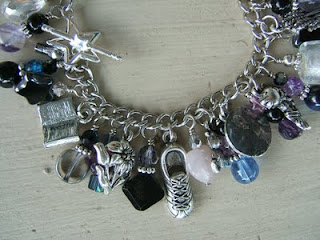 Do you see the clasp? IT IS SHAPED LIKE A STAR. GUYS. GUYS. IT IS SHAPED LIKE A STAR. Jennie put so much love into these bracelets. Under the ice charm? A teeny-tiny almost unnoticeable star. It's just...*sigh*...perfect.
And each link that doesn't have a charm? Has a beautiful set of beads. The pictures just do NOT do this justice. The beads are all in colors that match both the covers of ACROSS THE UNIVERSE and A MILLION SUNS. They shimmer. They sparkle. They are shiny.
Now, as I mentioned, Jennie made these bracelets just for ACROSS THE UNIVERSE. She actually made a whole shop in her Etsy store just for AtU--and while the bracelets sold out (on the first day they were on sale!) she does have earrings for AtU and is working on more jewelry as we speak! So be sure to check out her store! (For the record, I'm partial to the Little Fish earrings, but then again, I've got a soft spot for Harley.)
Now, I did mention that there were prizeS. But...the other prizes are....secret.
Yeah.
I know.
But on August 1st, in addition to opening up the very first contest that will feature the very first ARC of A MILLION SUNS, I'm also going to post a link to a scavenger hunt! And--for 24 hours only--if you follow the link, you'll discover what the secret prizes are.
So! Good times ahead!
Posted by Unknown at 1:03 AM

hehe first to comment....hope you do this contest INTERNATIONAL....marked 1st aug on my calender!!!

Yes! The contest WILL be international!

I am very excited. And thanks for making it international :)

I will drag my jet lagged self out of bed just for this. I also have a surprise for you. Check your email to answer a question and get a clue.

Gorgeous jewelry! But what I'm really salivating over is that ARC.....

You do realise how desperate I am to read A Million Suns, right? Thanks for making it international and I'll be checking back :)

That is one of the prettiest bracelets I've ever seen! Ever! I adore it! I am so excited now. My precious...

The scavenger hunt sounds fun but I want to win the arc! Thanks for putting this on!

I love this bracelet! You do the most innovative things.

Ack! ATU was one of 2 books I downloaded at 12am on the elease day, so I'd love an ARC of A Million Suns.