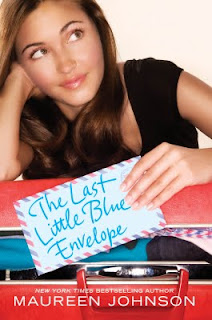 So the first thing you should know is that I'm a raging fan girl of Maureen Johnson.

First, there was DEVILISH. It was clever and witty and it really just made me sit up and say, "wow. This is an author worth watching."

And then there was THIRTEEN LITTLE BLUE ENVELOPES, and it was exactly the sort of book I wish I'd read when I was younger. It involved a girl who went off on an adventure through Europe, and she was a little scared, but she did it anyway, and she fell a little in love, but she kept going anyway, and by the end I found myself wishing with all my heart that I could send this book back in time and give it to myself when I was in high school.

And then I got to know Maureen a little better through Twitter. And she organized one-day Twitter explosions to donate money to ShelterBox and did a debate with the YA-hater Meghan Cox Gourdan, and I really wanted to nominate Maureen Johnson for the President of YA.

And then I read THE LAST LITTLE BLUE ENVELOPE.

I have to say, I had mixed feelings about it. I loved 13LBE so much that I was honestly a little worried about what a sequel would hold. Would Ginny's tentative relationship that was really just a fledging survive across the Atlantic? What would that last little blue envelope actually hold?

I knew Maureen Johnson was a genius. But I didn't know she was THIS much of a genius.

Here's the single best praise I can give to THE LAST LITTLE BLUE ENVELOPE:


It was a sequel that was better than the first book.
Do you know how rare that is (or at least, how rare that is in my own reading)? Off the top of my head, I can think of only one other book (DEMONGLASS by Rachel Hawkins) where I thought Book 2 was better than Book 1. It's not that I think all Book 2s suck, it's just that they're often not as good (imo) as their predecessor.
But THE LAST LITTLE BLUE ENVELOPE? Better than 13LBE. I loved the person Ginny had become as a result of her aunt's journey for her. I loved the realism to the relationships (I'm not going to ruin anything by giving too much away). I loved how I honestly didn't know how the book would end.
And--I love--loveloveLOVE--the last sentence of the last page of the last letter Ginny's aunt left for her.
Oh, and my fangirl love for Maureen Johnson? Just hit epic proportions. I recently finished THE NAME OF THE STAR, and it's official: MJ is on my must-buy list. If I see a book she's written, I will buy it, no matter what.
To see what the other Bookanistas are reading, click here:
Posted by Unknown at 10:46 AM

BEST PRAISE EVER!! I love it. I've never actually read Maureen Johnson, but I have a several of her books that I brought back from ALA, so I'll be diving in for sure. It's so rare to find a sequel that is better than the predecessor. Excellent review!

I liked LLBE better than 13LBE too! Ginny was so much more mature in LLBE. Also, Oliver.

I know! Right! This book was SO good. I got the first one and read it while traveling through Italy. Talk about perfect timing! And could not WAIT to get my hands on this book as soon as I got back from the trip. I love her style, I love her characters. Love MJ.

Also, I thought it was funny, because I too thought this one and DemonGlass were better than the first, and also feel that is an oddity :D

I could not agree with you more! LoveLoveLOVE LLBE and cannot wait to read NotS!
Very good review without giving away anything. One more word. Oliver!

One more sequel that outshone the wonderful first was Silksinger by Laini Taylor. (sequel to Blackbringer) Wonderful books, and I want more, but apparently their publisher didn't agree.....not that that has slowed Ms. Taylor down at all.....can't wait to read her newest book either! (Daughter of Smoke and Bone, out this fall)

Hi. My name's RaShelle and I'm a fan (stalker) of Maureen Johnson. But, anyway... She did a "pump you up" blurb for NaNoWriMo about THE MIDDLE a couple of years ago and I've been a superfan ever since. She's awesome. =D

Sarah Dessen and John Green have written books I wish I could send back in time to teen me. Kids these days are so fortunate to have as many great books written FOR them.

I haven't read any of Maureen's books (just a short story in Zombies vs. Unicorns) but this one has been on my radar. Thanks for the review!