Doing It Justice (Wherein I Fangirl at Laini Taylor)

Yesterday I talked about Story (with a capital S) and it turned into a wibbly-wobbly sort of explanation. Then, of course, I went to two--yes, TWO!--different blogs who both said it better than me:


So yes: go read these two ladies, especially if you're either in the first draft or the revising stage of a novel.
Something in Laini's post really struck a chord with me:

Big Things. Big Ideas. Big Plot. Back when I was brainstorming it and plotting (in the fall) I had a "OHMYGODTHAT'SSOCOOL!" brainwave that made the whole thing click into place, and now I am upon that thing! Yay!

But also: Oh! Now I have to do it justice. *knuckle chew nail bite*

I know exactly what she means by this. When I came up with the idea for Across the Universe, it really felt like a Big Idea--and my task really was to do it justice. Even as I was writing, I was conscious that I needed to push myself harder, find the right words, make everything about the novel just sing so I could do the story and the characters justice.

In the end, I was able to look at Across the Universe and know I'd given it my level best. If I hadn't done the Story justice, it wasn't from lack of trying.

I think that's why I struggled so hard with A Million Suns. I had the Big Idea--and I have cackled often when people tell me their guesses for the sequel because I think I've thrown a real shocker in there. But I was also conscious of the idea that I not only had to do the Story justice--I also had to do you justice. I definitely had a much more present idea of who my audience was, and a desire to make you happy with the sequel.

Laini also said something else in her post that's highly relevant:


Sometimes stories just "happen" and you hear writers talking about "taking dictation" etc as if a muse is speaking it straight into their brains or whatever. Ignore those writers. They will just drive you crazy. The huge majority of the time, we have to make our stories happen.

When I read this, my exact response was yes. YES. Because 90% of the time, it's the work that has to happen. And I can honestly say that A Million Suns was much more work than Across the Universe--but also just as worth it.

Ah! Well, that's me, being all verbose about writing! Enough philosophy: let's look at pretty pictures! 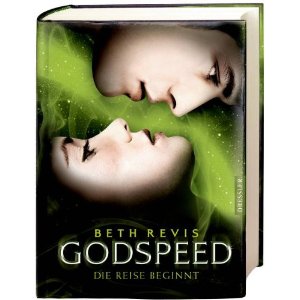 Lookit! LOOKIT! It's the German cover of Across the Universe--titled as Godspeed--The Journey Begins. Such a fitting title! What do you think?? And, if you happen to want a German edition of the book, you can pre-order it here.
Posted by Unknown at 12:01 AM

Thank you for the links! :) This post made my smile stretch to my ears, because I'm in the first draft of my novel and I've been finding those great BIG IDEAS everywhere!

Also, the German cover is BEAUTIFUL! I love how close it is to the US version but different in color and the faces are different. Absolutely gorgeous! :)

A Million Suns is going to be full of awesomeness. I haven't a doubt. And I think the German cover is just so cool.

Thanks for linking this up...Wonderful job you have done...

this is great. nice work I'd like to read a bit more concerning this topic. Thanks for sharing such a nice information..