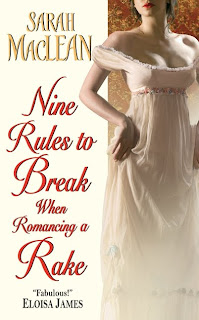 It's about to get all shades of steamy up in here.

So... occasionally I read a romance novel. I say "occasionally" not because I think it's shameful to read romance novels--after all, my mom reads little else--but because I don't want to lose my street cred as the writer who would rather (literally) blow up her character than have a kissing scene.

But every once in awhile, I find myself not wanting death and destruction with a healthy handful of zombies or killer unicorns or dragons thrown in. Every once in awhile I'd like a bodice-ripper. (Or, as the very old lady at my church put it: "thigh warmers". It took a full minute for me to figure out what she meant by that term, and I nearly choked at the pot luck when it finally hit me.)

Anyway, last night I started NINE RULES TO BREAK WHEN ROMANCING A RAKE--so far a clever title by the author of the YA novel THE SEASON, Sarah MacLean.

One scene stood out to me. In in, Callie has asked for a kiss from Ralston, a playboy rake. They brush lips, barely, and Callie says she's satisfied with such a kiss.

His lips curved at her ear as he spoke... "Kisses should not leave you satisfied."  [Insert Very Hot and Steamy Kiss Here, a Kiss so Passionate it Leaves Callie Breathless. Ralston then says:] "They should leave you wanting."

Okay, first? HOT.  Second: isn't that what a good novel should do? Maybe it's because I've got the ending of Hitchcock's THE BIRDS on the brain (my topic at the League today) or maybe it's because I'm already starting to think about the end of my own trilogy, but I think there's a very important lesson in this scene.

A good story leaves you satisfied. It makes you close the book with a happy sigh. All is well, the heroes have won (or lost nobly) and it is over and you're happy.

A great story should leave you wanting.
Posted by Unknown at 10:11 PM

Such an inspirational post. It makes me want to keep writing all night long and not stop until my head aches and my eyes cannot stay open! Thank you for your words. Thank you so much!

I occasional read a romance novel as well. So far I've only read from the authors I absolutely LOVE (Lisa Kelypas, Julia Quinn, Eloisa James)

Sometimes I like reading a book and knowing that there's an 100 % chance of a happy ending. Ultimately though, my heart belongs to YA. :)

Wow, that is an excellent point! I'd never thought about it like that--that desperation to continue the world of the story, to not let it be over.

And now I must go find this Nine Rules book (which I think I actually have somewhere) and read it. :-)

I'm editing my ending now (again), so this is a good and rather frustratingly timed post. I'm already trying to stop summarizing important stuff and now I have to leave 'em wanting? *sigh* Work, work, work. :D

BTW, your book is my reward for finishing this edit.

Some of my favorite kind of stories are the ones that I can daydream about after I've read them...it means the world and the characters have stuck with you, and you feel a little like they belong to you now. Great post!

That's so true. Thanks for the reminder. Now I must go make sure that I have done this in my WIP.

I definitely agree with you! I never thought about a great story as one that leaves the reader wanting more, but when I got to your last paragraph (about jumping in Narnia), I realized that you're totally right. I can easily name several books that left me in this ZONE, where everything about the next hour, day, week of my life was about living in that world.
- Alyssa of Redhead Heroines

I totally agree. A book that I keep thinking about long after I put it down...the one that I continue in my head, THAT is the story I really love.

I SERIOUSLY need to read that book! *pets cover*

Also, my favorite thing is when I read a book and immediately wish I could go back in time and read it over and over so it would never end. :)

So true. In related news, chopsticks make excellent wands. Just in case anyone was wondering.

Oh man are you right. I nearly choked on my coffee when I read "thigh warmers." Hilarious! I guess that's the real test of a good author - creating a world so amazing and so complete that your readers want to crawl inside and play around all day.

Whoa! Awesome sentence and post. A great story should leavve you wanting more. May I quote you on that? I'm going to make it my mantra.
Thank you for sharing.

Could not agree more! Great illustration. I read a lot of books that leave me anxious for the next installment, either by the author or in the series.

The fan fic point stood out to me, since that's how I started writing in the first place. (Thankfully, I've graduated past fan fiction. :D)

Oh, how I love this post! You are so right. Those novels that stay with you, with characters you can't stop thinking about, those are my five star books, the ones I read over again. I want to write those kinds of books. ATU did that for me :)

Going to the bookstore AT&T midnight for the sequel? Been there, done that! Writing fan fix after finishing a story? Totally dine that too! After finishing THE HOST I had to know what happened in the blank pages at the end, so I came up with my own idea.

YES - so true. When I get to the end of an excellent book, I'm always a bit melancholy afterward because I didn't want the experience to end; and when I can't stop thinking and wondering about the characters weeks later, I know it's because I was left wanting more. This also kind of reminds me of the screenwriting adage, "Enter the scene late and get out early." Whetting a reader's appetite is a skill.