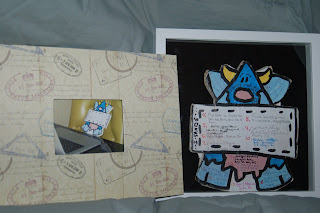 It's the holiday season, and the time of giving. There's tons of great charities out there, but I wanted to make sure you knew about something special the Kid Lit blogosphere is doing: auctioning off a signed piece of art that features TONS of Kid Lit authors (including yours truly) to benefit St. Jude's Children's Research Hospital.

First: the charity. St. Jude's Children's Research Hospital has a high cancer survival rate for children and works tirelessly to care for, treat, and research cures for children. One reason why I love them, though, is because "St. Jude is the only pediatric cancer research center where families never pay for treatment not covered by insurance. No child is ever denied treatment because of the family’s inability to pay."

Critter is the brainchild of Christy Evers--after seeing the artwork of local artist Ian Sands, she decided she wanted to make the experience of art interactive, and to include kid lit people from across the world. She commissioned a special piece of art from Ian--a Critter with space for kid lit authors to sign and share as they mailed the artwork (literally) around the world.


For those of you who don't know about Critter, here's a little summary:

For over 14 months Critter has traveled the worldvisiting talented writers, artists, and authors: while exploring their world. Christy Evers sent out Critter after an interactive art project, directed by the cutting edge artist, Ian Sands.

Critter has visited (and was signed) by PJ Hoover (author of the Forgotten Worlds trilogy) and the Texas Sweethearts, in Texas. Beth Revis in North Carolina (whose debut novel, Across the Universe, coming out in January 2011, is expected to be a HUGE success!). Christina Farley in Korea, New England with Nandini Bajpai, Illinois with Kelly Polark, (who is frequented in Highlights magazine), MG Higgins in California, Rena Jones (author of multiple picture books) in Montana, Cynthia Leitich Smith (NY Times best-selling author) in Texas, Bish Denham in the Virgin Islands, Jacqui Robbins (author of “The New Kid and Me”, and “Two of a Kind”) in Michigan, Tina Ferraro, (author of “How to Hook a Hottie, Top Ten Uses for an Unworn Prom Dress, and The ABC’s of Kissing Boys) in California, Cynthia Chapman Willis, (Picture book author of “Dog Gone” and “Buck Fever”) in New Jersey, Jill S. Alexander, (YA author of “The Sweetheart of Prosper County”) in Texas, Ellen Oh in Virginia, Alberta, Canada with Angela Ackerman (the blog-genius behind the “Writing Thesaurus”. The World-famous artist, Robert Bateman, also signed Critter (on his backside) as an honorary host.

Now--with ALL those signatures + a scrapbook full of his adventures, Critter's on auction and 100% of the proceeds will go to St. Jude Children's Research Hospital. It's the holidays--you were going to make a donation somewhere to celebrate anyway, weren't you? Why not put some of that towards a worthy charity and get a piece of art and collection of kid lit signatures in return?

Wanna see Critter's adventures with me? I took him to a castle.


Bid Today!
And hey, listen--let me sweeten the pot--if you're the winning bidder, drop me a line and I'll also mail you a signed copy of ACROSS THE UNIVERSE.
Posted by Unknown at 2:29 PM

It's been fun watching Critter travel through the blogosphere. What a great idea! And how cool are you for sweetening the pot? You're my hero. :)

Thanks so much for your luv and support of Critter. I appreciate it so much. You are awesome. I can't wait to read your book.