On the Age of Characters 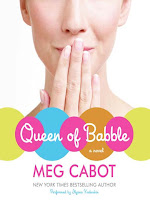 As you know, I am still a bit obsessed with the YA vs. MG question. Alan Gratz's short answer was simple: MG is for kids aged 8 or 9 to 12 years old, and YA is for 12 and up.

I wonder where Meg Cabot's The Queen of Babble fits in?

Lizzie Nichols, main character of The Queen of Babble is 25 years old, although at times she does sound much younger (she's got a lot of naivete). And she does some stupid things, like casual sex with the wrong person, but she's overall very wholesome (no drugs, only light drinking). In a lot of ways, it felt like an MG book with sex, a PG13 (maybe 17) rated version of The Princess Diaries, minus Genovia (instead, it's a French chateau called Mirac).

The very first book I tried to get published (currently shelved) starred a 25 year old character. Because I was 25 at the time. She's in college, and I needed her to be old enough to live alone. She doesn't do drugs or have rampant sex or cut herself (because I didn't). It's a MG-esque fantasy--girl with magic powers saves the world, etc., etc. I couldn't sell it. I got it as far as on the table of an acquiring editor at Random House, and she wanted the age lowered--to MG.

I went to my bookstore: I couldn't find any.

This is one reason why the "age range" of books isn't fair. Not only do the age ranges imply a certain age of the character/reader--it also implies certain themes. You want a book where a girl gets super powers and saves the world? It must be MG--unless they have sex and/or angst, then it can be YA. You want a book that shows a fairy-tale like world where the character ends up at a French chateau? That's not adult, even if there's gratuitous sex. It's YA.

I'd argue that Queen of Babble should be an adult book--I think it's written for that college age girl who doesn't like the boring adult books but is probably too embarrassed to go to the kid section of the bookstore. But. Queen of Babble is in the kid section of the bookstore anyway. Age ranges on books are not just about the ages of characters or even, to an extent, the kinds of things they do. It's about theme. If it's light and fun, it's MG or YA, no matter what.

Just think about your bookstore or library. Walk down the MG section. Here magic lies. Here are stories of adventure and fun and maybe a little romance, but not enough romance to break up the adventure and fun. Walk down the YA section. Usually this is a tad darker--more snarkiness, more sex, some darker themes. Magic has a price (a la Justine Larbalestier's Magic or Madness).

Now go down the adult section. No magic there. Unless you go down the SFF aisle, and then you can bet that the fantasies will be epic, the SF will focus more on science than on fiction, and the tomes could all be cut by 100 pages or more and not lose anything but the boring descritipion and gratuitious sex scenes. You're not going to find much adventure down the adult aisles either--the thrillers will have murderers or terrorists, the romances will have more romance than adventure, and literary fiction will just put you to sleep.

Thank God there's a genre with at least a little ingenuity. And if this means that Queen of Babble gets shelved with YA because it's light and funny and different, or that I've got to age down a character because God forbid something magical happens in college, so be it. At least there's still a section in the library where I can find books that are decent.
Posted by Unknown at 6:55 AM

This came out as much more of a rant than I'd intended...sorry!

No rant. :) It's interesting.. I saw Sarah M's MILKRUN in the YA section the other day in Borders.. Very similar to QUEEN OF BABBLE. Maybe there will be a post YA section one day. :)

I can only hope!

I remember in college when I wanted to read something fun, but really, there was nothing for me--just stuff that was either aged too young, or was boring!

I haven't read this one--I'll have to look for it next time I'm at chapters and see what you mean about the age-y ness.

For what it's worth on Meg Cabot's website she considers the Queen of Babble series to be for adults - not teens.

Really nice post! It hits everything on the head. Almost anything goes with YA these days.

Yeah, that's what it seems for YA... anything goes... which is really fotunate, right?

I'm so glad you commented on my post today, because it meant that I found your website. We have a lot of similar ideas. I agree with you whole hog on this age topic issue! There should be some sort of distinction between the "PG-13" and the ones more appropriate for the 18-30 range. I enjoy Meg Cabot and many of her stories are great for my 14 year old, but I don't want her reading Q of B yet or some of the more adult books she writes just yet. 12-18 is a huge range of maturity level. It would have been nice when I was in college to have a section of "fun" reads for me.