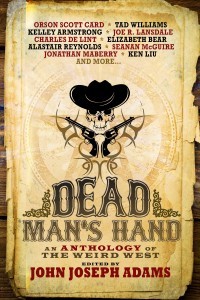 This was announced while I was away, so I'm playing a bit of catch-up here. But I wanted to make sure everyone knew about this awesome new anthology I'll be in, coming out next year!

Dead Man's Hand is a Western anthology...but a weird one. The stories all take place in the wild, wild west, but there's a twist--each one has a fantastical element. As editor John Joseph Adams says in the press release,


“The weird western is the forefather of steampunk, with a history that includes Stephen King’s  Dark Tower and Card’s Alvin Maker,” editor John Joseph Adams explains.  “But where steampunk is Victorian, weird westerns are darker, grittier, so the protagonist might be gunned down in a duel, killed by a vampire, or confronted by aliens on the streets of a dusty frontier town.”

Of course when I was invited to submit a story, I was all for it. First of all, Westerns are the way to my father's heart. But second of all, Firefly and Serenity were totally weird westerns, and they are my model for all things good.

My story in the anthology is called "The Man With No Heart." And it will be my first published short story that doesn't take place in the world of Godspeed. Instead, it tells the story of a man on a quest that takes him to the bottom Grand Canyon, following tiny mechanical spiders that should be impossible...but then again, he's impossible, too. And it was fact-checked by my father, who's read every Louis L'amour in print.

The anthology won't be out until next year, but the line-up is amazing. It's such an honor to be with such a long list of amazing, brilliant authors. You can read more about the anthology here, and you can add the book to your GoodReads list here!
Posted by Unknown at 1:57 PM